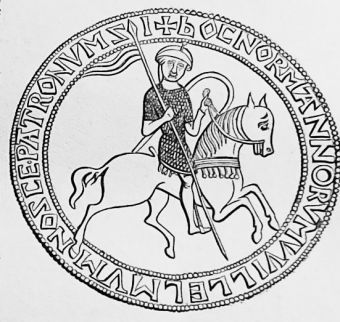 Great Seal of William I

Harold’s efforts had failed to make a united nation of the English. Wessex and East Anglia, which had known Harold himself as earl, were loyal to him; Mercia and Northumbria were ill-disposed to the house of Godwin, and the young earls, both of them of the house of Leofric, were either jealous of Harold or too lacking in vigour and decision to throw themselves whole-heartedly into a struggle against the Norman. It was Harold, not they, who saved the North from Hardraada, but they left him to defend the South from the Norman entirely with the levies from Wessex and East Anglia.

It was not the national army which William had beaten at Senlac. Nor would even a national army have been likely to prove successful against the invader, because the English nation refused to recognise that the conduct of war was a scientific operation. It relied entirely on hard hitting, and declined to adopt new methods.

Nor were the men who formed the fyrd adequately trained even in their own methods; Harold's disciplined huscarles alone stood in their ranks when the temptation to charge became strong. It seems as if Harold was the one man in England with a head on his shoulders, and that he came to grief through not realising the extreme stupidity of his countrymen.

Edgar the AEtheling
After Hastings a solid party of those who knew that they had forfeited all prospect of favour at the hands of the Norman were eager to maintain resistance, and they succeeded in persuading the Witan at London to elect young Edgar the AEtheling king. But neither the boy himself nor any one near him was competent to organise a fresh defence. And there was another section who had already despaired of offering any effective resistance to the Conqueror, and were resolved to try and make their peace with him at any price.

Sickness prevented the Conqueror and his army from moving at once; but the delay that a strong man might have used for vigorous reorganisation only gave the English time to grow more jealous and suspicious of each other. When William did move he did not march straight upon London, but struck across the Thames at Wallingford thus interposing his army between the South and any possible succours from the North. Edgar, sundry bishops, the Londoners, and all the leading men who were still in the South, came in and made submission, offering William the crown, which was duly set on his head at Westminster on Christmas Day.

Dividing the spoils
William intended to reign not as conqueror but as lawfully elected king, though he had to satisfy his followers. He would act according to law himself and would compel his followers to do so; but that did not prevent him from interpreting the law as best suited him. And it suited him to claim that Wessex and East Anglia had been in rebellion against him as their lawful sovereign, and that there was merely a difference of degree between those who had fought against him in arms and those who "had failed to fight for him.

Consequently all lands in Wessex and East Anglia were forfeited; the less "guilty" of the English were then permitted to recover possession at a price, receiving their lands back as tenants from the king; but most of the land was not restored to the English proprietors, but was distributed among the adventurers and barons in William’s train, always as property of his own granted to them on feudal tenure. The royal estates William appropriated.

Edwin and Morkere and Waitheof, the son of Siward of Northumbria, who held the earldom of Huntingdon, were not deprived of their earldoms, but were kept by William in attendance on himself; and he now considered the position sufficiently secure to warrant his withdrawal to Normandy, there to set matters in order. He left his half-brother Odo, Bishop of Bayeux, in charge south of the Thames, and William Fitz-Osbern in charge of the country north of the Thames up to the Tees.

But the Frenchmen, as William’s followers were inclusively termed, behaved after the fashion of the time as masters of a conquered country; insurrection flamed up in the West. Within the year William, was back again. Submission was prompt when William marched upon Exeter, but Northumbria and Mercia chose to declare for the AEtheling.

Again William’s approach was met by submission. He bestowed a contemptuous pardon on Edwin and Morkere, while the AEtheling took flight to Malcolm Canmore in Scotland, where that long-headed ruler gave him an asylum, but at the same time was at pains to secure what would now be called an entente between himself and the Conqueror, to whom it is also possible that he rendered some very indefinite homage.

The Harrying of the North
But as soon as William’s back was turned Northumbria again broke into revolt and was again reduced to immediate submission by the rapidity with which William reappeared in the North. Then in the late summer Sweyn of Denmark took his turn and sent a great mixed fleet to the Humber, whereupon Northumbria and the Fen country again rose and cut up the garrisons which William had left. This new northern insurrection and invasion gave the signal for sporadic insurrections all over the country.

Again William sped to the North, drove the Danes into the district of Holderness where he could not attack them without a fleet, and then proceeded to lay Yorkshire desolate. Twenty years afterwards, if the case of one district may be regarded as a fair sample, three-fourths of the Yorkshire villages were uninhabited, and the remainder had only a fraction of their former population.