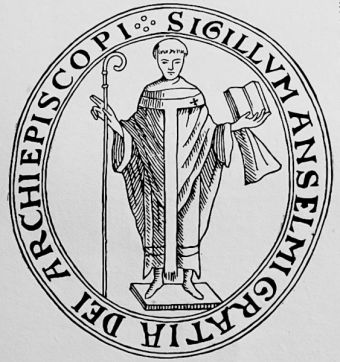 Henry had over his brother Robert the practical advantage of being on the spot. He claimed a prior right to the succession on the ground that he was born on English soil, son of the king of England, whereas Robert was born a foreigner before his father won a kingdom.

The blood of Alfred ran m his veins, since his mother Matilda was descended from that daughter of Alfred who married Baldwin II of Flanders. Robert's advocates were outnumbered among the barons and clergy, who were at the moment assembled in sufficient numbers to claim the character of a Witan or National Assembly.

The absent Robert was set aside; Henry was elected, and proceeded to strengthen his position by issuing a charter which was accepted in all good faith, wherein he promised to observe "the good laws of King Edward" as modified by his father, and to abolish the innovations introduced by his brother. Another popular move was the arrest of Ranulf Flambard.

Marriage to Matilda
Moreover, Henry was shrewd enough to select strong and capable advisers and at once to recall Anselm. The support of the English population was made certain by his politic marriage with Edith, otherwise called Matilda, the daughter of Malcolm Canmore and of Margaret, and therefore a princess of the royal house of Wessex.

The prevailing brutality of the period is illustrated by the fact that Edith had apparently actually taken the veil as a nun as the only way of protecting herself from some more cruel fate. Anselm himself had no qualms in accepting a declaration that though she had professedly taken the veil she had not technically "entered religion."

Rebellion
Henry was not to remain in possession for long undisturbed. In 1101 Robert was back and succeeded in effecting a landing in England. The exceedingly uncertain attitude of the baronage made the issue of a fight doubtful; but Robert was contented to sell his claims for a pension and an agreement for mutual assistance in the punishment of traitors.

Henry was prompt to strike one after another at the great barons whose loyalty was dubious or more than dubious. The group of Montgomerie brothers, headed by Robert of Belleme, prepared to resist, but others hesitated to support them; the English gladly answered the summons to the fyrd, and the rebels took flight to Normandy.

Tenchebrai
During the next few years Robert demonstrated his incapacity for restraining the plots of the barons who had taken refuge in his dominions; and Henry took the view that he himself had no alternative but to appropriate the control of Normandy to himself.

The result was a campaign in Normandy in which Robert was decisively - defeated and taken prisoner at the battle of Tenchebrai, a victory which the English foot soldiery, fighting for Henry, regarded as compensation for Hastings. Robert was held in custody for the rest of his life, though the tradition that his eyes were put out was probably a fiction of later date.

William the Clito
But troubles were not ended, because Henry did not detain Robert's young son William, called the Clito, in his own hands; and the boy was afterwards made the figurehead for rebellions in Normandy and Maine which were fostered by the French king. The total result of the conse­quent fighting which went on at intervals from 1111 to 1119 was the recognition of Henry as Lord of Normandy, Maine, and Brittany.

Henry's daughter Matilda or Maud was wedded to the German emperor, Henry V, while his son and heir, William, was betrothed to the daughter of Fulk of Anjou. With these alliances Henry's power threatened to become overwhelming; but his designs received a check when his son William was drowned at sea in the disaster of the White Ship.

The Count of Anjou then married his daughter to the Clito, who had been restored by his cousin's death to the position of claimant to the English succession, and now found new support for his immediate claim to the Duchy of Normandy. Henry's arms, however, were again successful, and then the emperor died.

Matilda as heir
While Matilda was the emperor's wife there would have been no chance of her succession to the English throne; but although there was no precedent for a queen regnant of England, Henry now succeeded in persuading the Great Council to do homage to her as his heir. Those who took the oath included her uncle David, the last of Malcolm Canmore's sons, and now king of Scotland, and also Stephen of Boulogne, son of the Conqueror's daughter Adela.

Two years later the Empress Maud, as she is generally called, was wedded to Geoffrey, son of Fulk of Anjou; and the offspring of this marriage, Henry, born in 1133, was destined to establish the Plantagenet line on the throne of England.

The succession issue
The marriage, however, was unpopular, since Normandy had no inclination to find itself annexed as a province of Anjou, and the barons of England were no better disposed. Thus in spite of the death of the Clito, and the renewal by the baronage of their oath of allegiance to Matilda, Henry was painfully aware that his daughter's succession might be disputed. For there were two grandsons of the Conqueror, Stephen of Boulogne and his elder brother Theobald of Blois, either of whom might put in a claim, although Stephen could not do so without breaking the oath of allegiance which he had already taken.