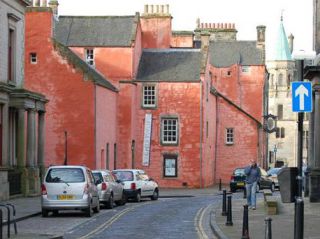 Abbot House Heritage Centre
Abbot House is a restored 15th-century house in the historic Maygate area of Dunfermline houses a local heritage centre, with displays on the history of Scotland, the abbey and the Dunfermline area.
The house dates to the mid-15th century and was built adjacent to the abbey wall and on top of a medieval burial ground for the abbey. Beside the house is a beautiful medieval garden, but the main historic feature is a 16th-century fresco which formed part of a whole series of paintings decorating the principal chamber. The fresco probably dates to the 1570s.

Abbot House was one of only a few stone buildings in Dunfermline in the early 17th century, a fact which enabled it to survive a devastating fire in 1624. Curiously, the name 'Abbot House' or 'The Abbot's House' was not used to describe the property until the 19th century.

Objects recovered during archaeological investigations on the site are on display, including Rhennish pottery, a medieval ear spoon for cleaning wax out of ears, and a French jeton, or counting disc used for performing calculations and as a gambling token.

Abbot House combines a cafe, traditional brew house, and gift shop within the walls of a 16th-century house. The house is unmissable, with its coral-pink harled exterior.

NOTE: Abbot House is currently closed. Ownership has been transferred to the Carnegie Dunfermline Trust.