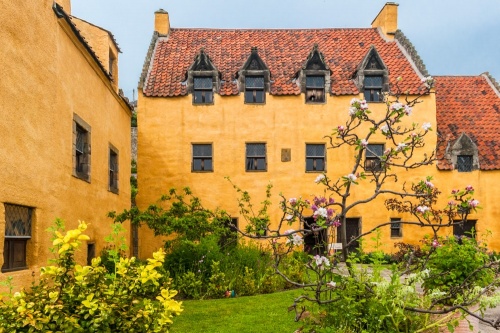 Culross Palace
History lives on at picturesque Culross, with a wealth of historic buildings lining cobbled lanes. The remarkable thing about Culross is just how little has changed over the past 3 centuries; it is like stepping back in time. Chief among the historic buildings is Culross Palace, now in the care of the National Trust for Scotland.

Not really a palace nor indeed even royal, this attractive house was built between 1597 and 1611 by Sir George Bruce, and is an outstanding example of 17th-century domestic architecture. The interiors are fascinating, with colourfully painted pine panelling depicting Biblical scenes, plus Dutch tiles, and authentic 17th and 18th-century furniture.

The north wing is a separate building dating from 1611. It has a stable, byre and hayloft on the ground floor, and above these are apartments with rich panelling decorated with still more ceiling and wall paintings.

Among the rooms open to the public is The Laird's Room, leading to a stone-vaulted strongroom, where Sir George's valuable documents were stored for safe-keeping. Documents like royal charters were just as valuable as actual cash, and Sir George needed a safe, fireproof place for storage.

The most impressive room, however, is The Painted Chamber, an amazing room, probably created in the early 17th century. The painted wood panelling is a marvel; with panels depicting Biblical scenes. with a Latin moral maxim above and a rhyming couplet below each scene.

Behind the Palace is a recreation of a 17th-century garden, with terraced beds mixing produce for the kitchen with fragrant and colourful places to relax, with covered walkways leading to secluded arbours and an excedra. The effect in season is a sensual feast. 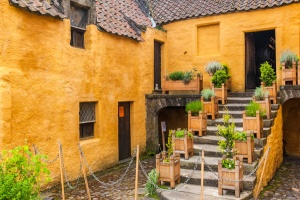 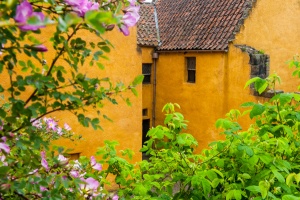 The Palace from the gardens

Culross was an important religious centre as early as the 6th century. St Mungo, the founder of Glasgow, was born here, and after his death a community of monks was established here. The monks mined coal, and over the next centuries the small town became a centre for the coal trade, so much so that the Culross chalder became the standard Scottish unit of measure for weighing coal.

Bruce came up with a way to keep deep mine shafts ventilated, and it was said that his men dug more than one mile under the Forth channel. The mines at Culross were considered a wonder of the 16th-century world and prompted James VI, who wanted a slice of the town's prosperity, to grant Culross the status of a royal burgh.

A Short Tour of Culross

Highlights of historic places to see around the borough. Step back in time and enjoy this picturesque settlement, with its cobbled streets and wealth of historic buildings.

You can book a walking tour of the borough from the National Trust for Scotland shop in the Palace. I can highly recommend the tour; our guide was very enthusiastic and knowledgeable, and with his aid we were able to access The Study and Town House, which are not normally open to visitors.

A few yards from the Palace is the Tolbooth, or Town House, with its distinctive tower steps to a first-floor entrance. The Town House was built in 1626, but the tower and front facade were not added until 1783. The building initially served as a combination gaol and courthouse. Visitors can see a gaol cell and the panelled court room chamber. According to tradition, regular felons were held in the gaol cell, but witches were held in the attic. 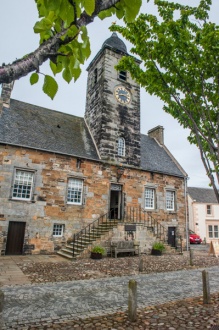 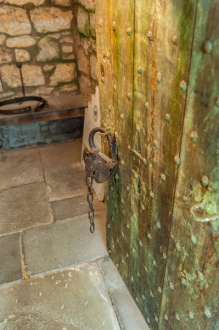 This beautiful whitewashed house near the Mercat Cross was built in 1610 for a wealthy merchant. The exterior boasts a crowstepped gable, beside which rises a corbelled Outlook Tower with a small lancet window. The house got its name from the tradition that Bishop Leighton of Dunblane stayed here on his diocesan visits to Culross.

The main chamber has an exquisite painted ceiling and period furniture. The Bishop used the Outlook Tower chamber as his study. The tower is accessed by an extremely narrow spiral stair, but your reward for climbing the stair is a wonderful view over the Forth. 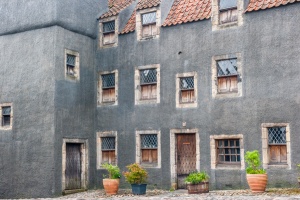 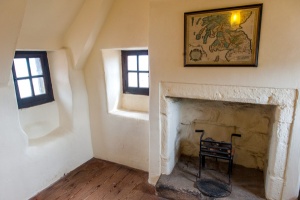 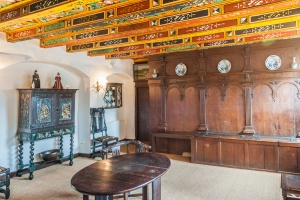 Immediately before you reach The Study is this cobbled lane, which rises steeply up the hill. The centre of the cobbled surface is raised, to create a small causewayed surface. This centre section was the domain of local worthies, while poorer folk were expected to step down into the gutters that run on either side of the lane. 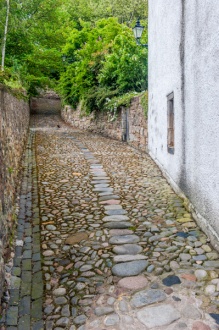 In the cobbled square facing The Study stands a late 16th-century cross. Only the stepped base of the cross is original; the rest was rebuilt in 1902.

If you climb Kirk Street from the Mercat Cross you come to the ruins of Culross Abbey beyond a stone wall on your right. The abbey was founded in 1217 by Malcolm, Earl of Fife, for monks of the Cistercian order. Remains include domestic buildings, vaulted cellars, and part of the church nave. Much of the rest of the abbey has been incorporated into the current parish church, immediately uphill of the abbey. For more, see our full article on the Abbey. 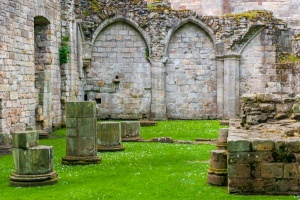 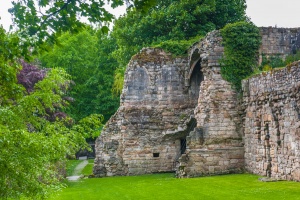 The south wall of this lovely old church was the Lay Brother's Choir of Culross Abbey. In the north transept is the Bruce Aisle, with wonderful alabaster monuments to Sir George Bruce, his wife, and their 8 children. Nearby is a worn Celtic cross, and in the churchyard is a memorial to Stewart McPherson, who received the Victoria Cross at the bloody Siege of Lucknow in 1857. 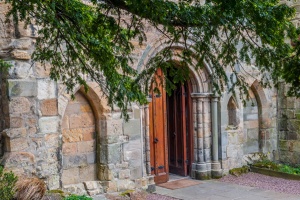 Entrance to the church 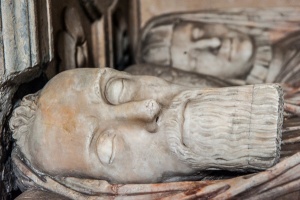 That's just a taster. There's a lot more to see in Culross. Just wandering around the cobbled streets is an experience to revel in. Give yourself plenty of time to explore the royal borough, and do take the guided tour; its a wonderful introduction to the history of this delightful location.

More self catering near Culross Palace and Royal Burgh >>

More bed and breakfasts near Culross Palace and Royal Burgh >>