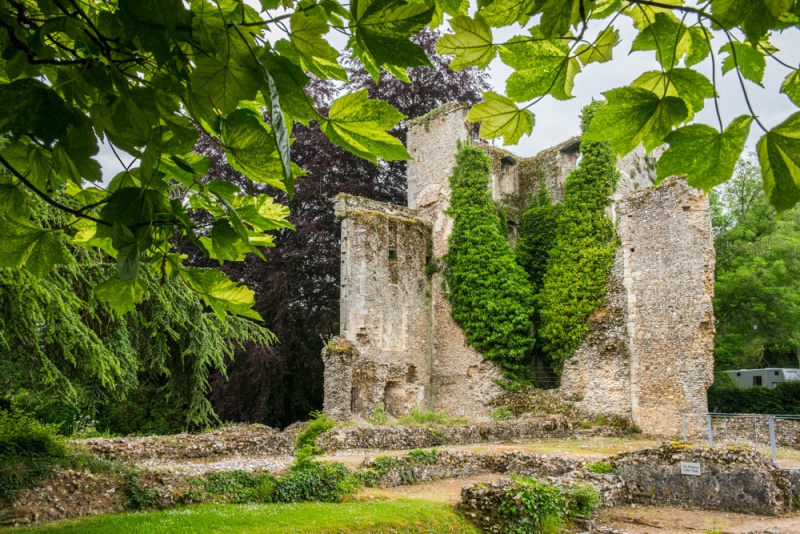 A moated Bishop's palace built around 1135 for the Bishops of Winchester. The bulk of the surviving structure dates to the 12th and 14th centuries, with a great hall and tower.
History
Bishop's Waltham Palace was begun by Henry of Blois, Bishop of Winchester from 1129. Bishop Henry was the younger brother of King Stephen, and he needed a residence to reflect his status and power. 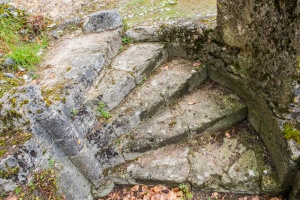 Remains of a 12th-century spiral stair
The diocese of Winchester was the richest in England during the Middle Ages, and the Bishops and senior clergy travelled and stayed in style. The Palace at Bishop's Waltham reflects that power and prestige. Given the volatility of the times, it is no surprise that Bishop Henry built a heavily fortified castle rather than a luxurious residence.

By the late 14th century the need for defence had lessened, and Bishop William Wykeham rebuilt the earlier castle as an imposing palatial residence, and much of the Palace ruins we see today are Bishop William's work. In the following century, Bishop Thomas Langton added a wall around the Palace site and built a garden house.

In 1182 Henry II called a council of nobles - a forerunner of our modern Parliament - to meet at Bishop's Waltham Palace and help plan a crusade. Another crusader to stay here was Richard the Lionheart, who was entertained here after his coronation. Margaret of Anjou slept here, in a luxurious bed, said to be the same one where Bishop William Waynfleete and Bishop William Wykeham died.

Henry V stayed at the Palace in 1415, and Henry VIII followed suit on his way to meet King Francis I of France at the Field of the Cloth of Gold in 1520. Mary I came here on her way to Winchester to marry Phillip II of Spain, and her sister Elizabeth I visited as well. 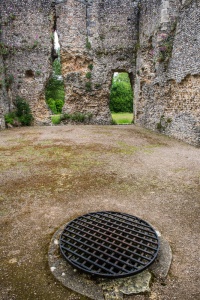 A well within the
Great Hall kitchens
The Palace was besieged by Parliament in the Civil War and the bishop was forced to escape in a dung cart, dressed as a labourer. The Palace was destroyed in 1644 by Parliament so that it could not be garrisoned against them by Royalist supporters. It was never rebuilt, and today much of the site is a roofless and romantic ruin.

The centrepiece of the site is the ruined Great Hall, and a later farmhouse built within the ruins serves as a local museum. The 12th century west tower served as the main residence for the Bishops, and you can see remains of a Brewhouse, an important part of any medieval residence.

The Palace buildings were robbed for stone and you can see carved stone fragments from the Palace incorporated into many older buildings around Bishop's Waltham.

The Palace is an open site, accessible at any time, but the town museum has limited opening hours.

The Palace is well signposted, but beware if you are using the postcode for your satnav and approaching from the east. Our satnav tried to send us on a circuitous route on narrow lanes behind the castle site. The correct access point is directly off the B2177 immediately east of its junction with Station Road. Also be aware that there no visitor facilities.

I found the Palace site intriguing to explore. Beyond the Great Hall, Brewery, and farmhouse much of the site is treed, with paths cut through very high grass. It gives the Palace the feel of being in an overgrown garden - and also makes good waterproof shoes a must if it is early in the morning or if it has been raining. The most impressive feature is the Great Hall, with its huge windows, and you can also look straight down into the chapel crypt, overshadowed by a large tree.

The farmhouse makes a wonderful contrast in historic architecture, standing beside the remains of the Brew House. The latter building is fascinating. It is huge, and points out just how important brewing was in an age when water was unsafe to drink, and beer (or wine) provided the only reasonable alternatives. 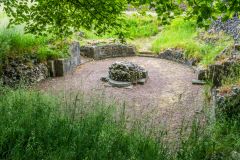 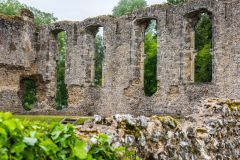 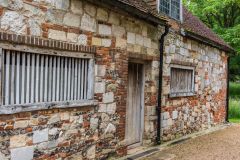 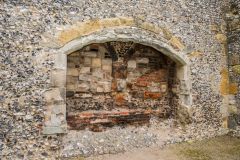