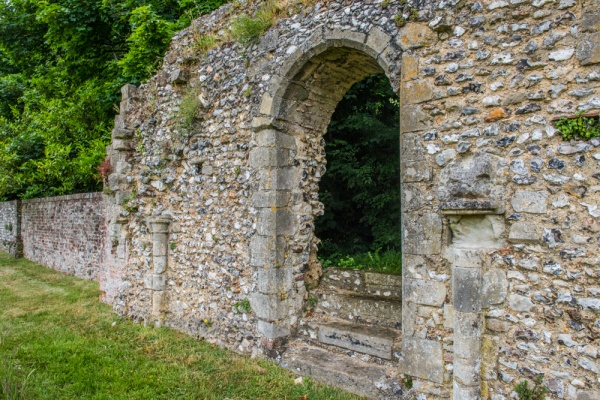 The ruins of Southwick Priory

A section of medieval wall is all that remains of the 12th century priory at Southwick. The Priory was founded by Henry I and was visited by Henry VIII three decades before the same king suppressed it.

The story of Southwick Priory is intertwined with Portchester Castle 2 miles to the south. In 1135 Henry I established a priory of Austin canons at St Mary's church in Portchester, which still stands within the encircling walls of the castle. 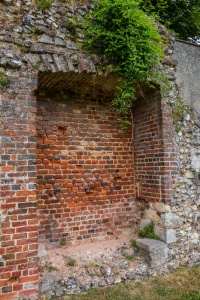 Brick-lined blocked
opening in the wall

Sometime around 1145 the priory moved from Portchester to a site further inland at Southwick. The priory maintained ownership of St Mary's church. In 1204 King John granted the canons the right to hold a weekly market and an annual fair and confirmed their right to the manor of Dean.

Apparently not everyone was convinced that the priory had the right to Dean manor; in 1280 the Prior had to appear in court and show King John's charter to convince a jury that they owned the estate. Prior Andrew of Southwick must have aroused the ire of his superiors, for in 1281 Archbishop Peckham removed the prior from his post and confined him to the canon's dormitory until he could produce a valid account sheet for his expenditures.

Edward II sent several of his old servants to Southwick to receive food and clothing, so it seems as if the crown used the priory as a sinecure, a reward for valued service.

Bishop William of Wykeham must have had a fondness for Southwick Priory, for he founded a chantry there to pray for the souls of his parents John and Sybil. The canons renewed their oaths to fulfil this chantry duty on three occasions during the late 14th century. The bishop's friend Sir Bernard Brocas of Roche Court also founded a chantry at Southwick in 1385. 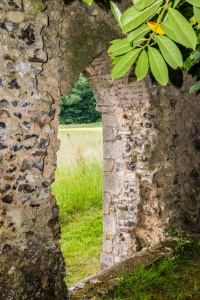 The rear face of
the remaining doorway

The Priory continued to enjoy royal favour, for in the same year of 1385 the Prior was appointed to oversee new construction ordered by Edward III at Portchester Castle and to control expenses for the project.

During the late medieval period, Southwick became a popular destination for pilgrims, most of whom came to worship at the Shrine of Our Lady, and the priory became known as Our Lady of Southwick.

Henry VIII passed through Southwick in 1510 and made an offering at the Our Lady of Southwick. Henry's connection to Southwick was brief, and in 1536 the task of finding an excuse to dissolve the Priory fell to his advisor Thomas Cromwell.

Cromwell found the excuse in a letter sent by one of the canons, James Gunwyn, who claimed that the five daily masses ordered centuries before by Bishop Wykeham had not been observed for over 40 years, and that the priory's accounts books had been falsified.

The Priory was duly suppressed in 1538, the church pulled down, and the prior's lodging turned into a dwelling. The house burned down in 1750 and the stone was used for local building projects. The site of the house is now occupied by Southwick House.

Of the monastic buildings nothing remains save for a section of wall and a few earthworks. The wall, reached only by a footpath, contains a well-preserved doorway, a buttress, and several short sections of wall foundations leading away at right angles. There are several slender pillars and carved capitals built onto the wall.

Some carved stone fragments have been incorporated into the walls of the parish church of St James, on High Street. 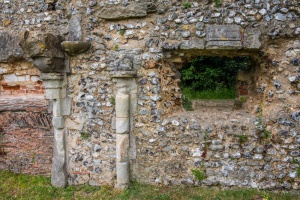 A pair of columns and
a window opening

The official English Heritage website simply says there is parking opposite the priory. This is very misleading. The priory stands on the edge of a woods, bordering on the Southwick Park Golf Club. It can only be reached by footpaths which lead off North Road, through the woodland, known as The Wilderness. Your best bet is to use the village parking area, and walk up North Road from its junction with High Street.

Just as the thick woodland begins on your right (the east side of the road) you will see a footpath leading into the woods. Follow this for five minutes as it meanders through trees until you emerge at one end of a long stone and brick wall. You don't immediately realise it, but this wall is what remains of the Priory.

It will not take long to explore the ruins, if indeed 'explore' is the right word for a short section of wall. There are some very nicely carved architectural details, including a slender column and capital, and a lovely medieval doorway.

The setting is evocative, with woodlands crowding upon the Priory remains on one side, and on the other, the fairways of the local golf club. Do take the time to explore the village of Southwick itself, which is blessed with a large number of picturesque older buildings and a lovely parish church. 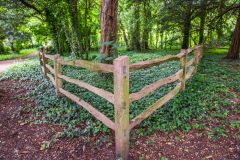 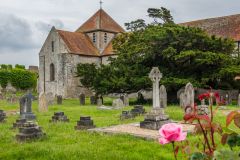 More self catering near Southwick Priory