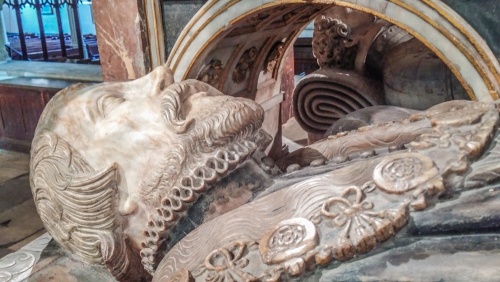 Titchfield's attractive parish church, dedicated to St Peter, is the oldest church in Hampshire, with its origins rooted in the 7th century. It is thought that the first church was established here around AD 780 when St Wilfrid arrived in the Meon area.

That first Saxon church consisted of little more than the current nave and west porch, where the tower now stands. The lowest part of the tower retains Saxon stonework and there is original Saxon stonework over the chancel arch.

The first written record of a church comes from AD 982 when a charter of King Ethelred mentions a religious establishment here. 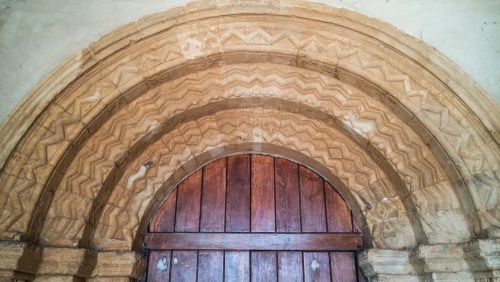 Around 1180 a south aisle was added and the doorway that now separates the nave from the tower. The porch was then raised to create the west tower. The chancel was extended in the 13th century to its present size.

The chancel probably owes its size to Titchfield Abbey, established in 1231 just north of the town. The church was granted to the Premonstratensian canons of Titchfield by Peter de Roches, the Bishop of Winchester and for the next three centuries the abbey retained close ties to St Peter's Church. One of the canons usually served as the canon-vicar of Titchfield's parish church. 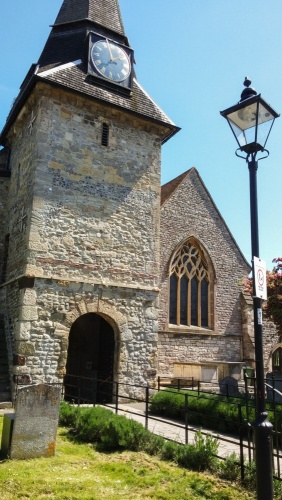 Relations between the abbey and the parishioners of Titchfield did not always progress smoothly. The canons of Titchfield Abbey thought that the residents should pay higher rents. Feelings sometimes ran high, and on one memorable occasion in 1377 worshippers shouted down a church official who tried to announce the closure of a chapel at nearby Hook, then part of Titchfield parish.

Sometime in the first half of the 14th century a south chapel was added to the church. Here is where you will find the oldest memorial in the church, a worn effigy of a knight in armour.

A century later a north aisle was added, enlarging the church still further. The chancel was rebuilt and the west tower given its striking spire. 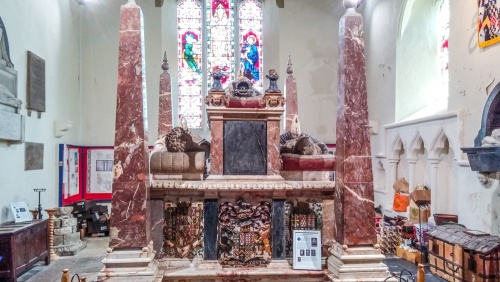 After the abbey was dissolved by Henry VII in 1537, its lands passed to Thomas Wriothsley, later the first Earl of Southampton. His son Henry left £1,000 in his will to erect the hugely impressive (and impressively huge) Southampton Monument, in the south chapel.

This sumptuous piece of marble and alabaster sculpture was created in 1594 by a Flemish sculptor named Gerard Johnson and honours the first Earl and Countess of Southampton as well as their son and heir (d 1582).

At the top is an effigy of Jane, Countess of Southampton (d 1574) and below is her husband (d 1551) and son. Near the monument is the Earl's mortuary helmet and against the south wall is the memorial of Lady Mary Wriothesley who died in 1615 at the tender age of four. The third and fourth Earls of Southampton are also buried in the family vault beneath the chapel.

The church was comprehensively restored in 1866. Unfortunately, the Victorian restoration removed the Norman south aisle and replaced it with a new one in Decorated Gothic style. 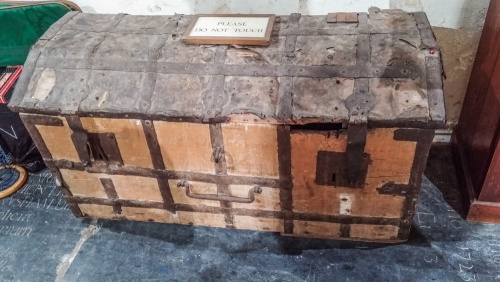 We've already mentioned the outstanding Southampton Monument in the south chapel. Other highlights include the Saxon west door, accessed through 17th-century iron gates. Over the doorway are re-used Roman tiles creating a decorative banding design.

If you look closely at the north and south faces of the tower exterior you can clearly see the Saxon roof profile, notable for its very steep pitch.

The west nave doorway dates to the 12th century and is richly carved with a mix of foliage and strange beasts. Set into the wall high above the doorway is a round-headed Saxon window arch. There is also some Saxon stonework on either side of the chancel arch.

Between the chancel and the south chapel is a 14th-century arcade. The arcade capitals are carved with grotesque winged figures amid foliage. On the north wall of the chapel is a marble memorial to the Hornby family centred on a sculpture of a young man by Sir Francis Chantrey, dated 1836. 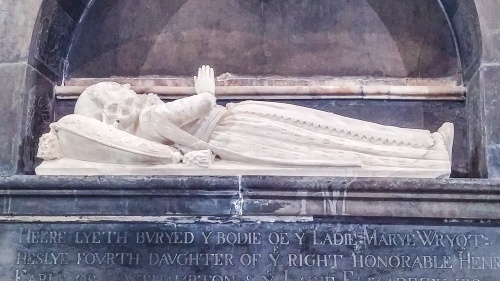 The stained glass is almost all Victorian and features work by the famous firm of Clayton and Bell. Another Victorian treasure is a triptych above the chancel arch, designed by CE Kempe in 1889.

The font is a modern creation, carved in 1951 by Charles Upton as a memorial to the troops who passed through Titchfield on their way to the D-Day landings in 1944.

On the north wall of the chancel is a tablet in memory of William Chamberlaine of Beaulieu (d 1604). 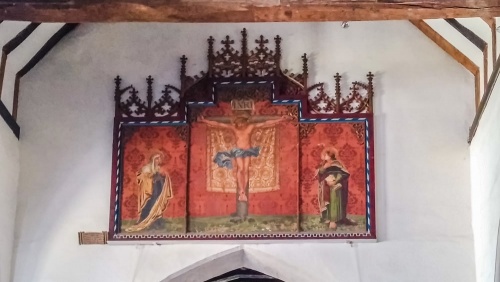 St Peter's Church is at the eastern end of Church Street, reached by its junction with West Street, North Street, and South Street. There is no allocated parking for the church, but there are parking spaces in the village square. If the square is full there are free parking areas at the Titchfield Community Centre and at Barrys Meadow.

I highly recommend combining a visit to see St Peter's Church and the impressive ruins of Titchfield Abbey, less than a mile away.

Self Catering near Titchfield