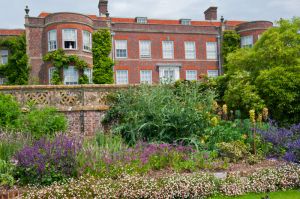 It is rare that a stately home is the result of a single man's vision, but Hinton Ampner house and the lovely gardens that surround it are very much the result of one man's passion for Georgian style. Ralph Dutton (1898-1985) grew up in the Victorian pile fashioned by his grandfather from an earlier 18th century house. That house, in turn, was built on the site of a Tudor manor first leased by Dutton's ancestor, Sir Thomas Stewkley in 1597.
Ralph Dutton had unhappy memories of his childhood home, so when he inherited Hinton Ampner in 1935 he set to work to transform the gloomy house into a light, elegant house that reflected his passion for all things Georgian. He set out to reveal the Georgian underpinnings of the Victorian house, with the aide of architects Lord Gerald Wellesley and Trenwith Wells.

The interiors suffered a major setback in 1960, when a disastrous fire damaged much of the Georgian splendour that Dutton had worked so hard to create. Hundreds of precious books were damaged and artwork was lost to the flames. You'd never know it to look at the interior of the house today; the rooms are full of wonderful art and furnishings. There are five main rooms on the ground floor, and a set of bedrooms and associated bath rooms and dressing chambers on the first floor.

My favourite was the Dining Room, with a wonderful plaster ceiling designed by Palladian master architect Robert Adam. The ceiling is decorated with a series of roundels painted by Angelica Kauffmann. The ceiling was badly damaged in the fire, so much has had to be restored, but the result is a wonder of Georgian neo-classical elegance. In fact, much the same can be said for all the state rooms!

Hand in hand with the rebuilding of the house, Dutton set to work to create gardens that were a match for his Georgian ideals. He planted trees with an eye to emphasising the natural rolling hills. In 1935 he laid out a Sunken Garden with a Long Walk. These newer features were married to an existing Lime Avenue, and rose borders inspired by the gardens at Sissinghurst.

Hinton Ampner gardens were developed with a series of linked 'rooms', informal areas that merge gently one into the other. Vistas are punctuated with occasional glimpses of classical statuary and urns half-hidden in the greenery. This is a delightful garden, not too large, but full of interest.

Hinton Ampner is one of the great gardens of the 20th-century. It is a masterpiece of design uniting a formal layout with varied and informal plantings in pastel shades. A 12-acre garden of all year interest is planted with scented plants and offers magnificent vistas over parkland and rolling Hampshire countryside. Hinton Ampner is a delight to visit, whether your tastes run to country house interiors or elegant gardens, or both, you will find something here to fascinate.

Historic House: The house is tenanted but can also be visited and contains a fine collection of English furniture, Italian paintings and hard-stones.