HERITAGE HIGHLIGHTS:   The oldest almshouses in England still in use 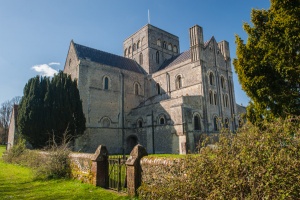 St Cross (officially The Hospital of St Cross and Almshouse of Noble Poverty) was founded by Bishop Henry of Blois in 1132, making it the oldest almshouse in England still in use for its original purpose and arguably the oldest charity in the country.

The Foundation of St Cross

The 1130s in England were a time of enormous upheaval. Stephen of Blois and his cousin, Empress Maud, both claimed the throne. The Civil War between Stephen and Maud plunged England into turmoil; villages were burned, crops destroyed, and armies ravaged the land. It was in this tumultuous time that the Bishop of Winchester, Henry of Blois, was convinced to found his new hospital.

The story goes that Henry was walking by the Itchen Meadows when he met a peasant girl. She begged him to help the local families, who were starving. He was moved by the girl's plight but eventually carried on with his walk. A little further along the river, he found the crumbling ruins of a religious house, perhaps one destroyed in the Civil War. He resolved on the spot to found a new monastic house to care for the poor.

Is the story true? We don't know; certainly, it could have happened, given the hardship caused to the local population by the war. We do know that Henry founded the Hospital sometime between 1132 and 1136. Its mission was to provide accommodation for 13 poor men who were too ill to work. In addition, it was to provide food for 100 men at the gates each day. 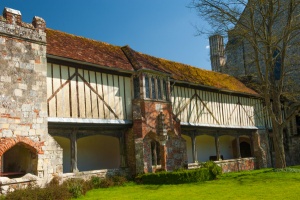 The Almshouses at St Cross Hospital

The Hospital also served as a waystation for pilgrims on their way to Canterbury or Southampton. One of the ways in which the Hospital met its mandate was to provide a "Wayfarer's Dole" (bread and ale) to travellers. The Wayfarer's Dole is still given to all who request it at the Porters Gate. More modern style refreshments can be had at the Hundred Mens Hall.

In 1446 the Hospital was expanded by Cardinal Beaufort, successor to William of Wykeham as Bishop of Winchester. The Cardinal's contribution was to found the Order of Noble Poverty, building the Almshouses to augment the existing Hospital buildings.

The church of St Cross is an excellent example of late Norman architecture. Author Simon Jenkins (England's Thousand Best Churches) called the church 'a cathedral in miniature'. The church is the only part of the original 12th-century hospital to survive. It was begun in 1135, shortly after the hospital was founded, and was built with stone brought from as far away as Caen, in Normandy.

One curious feature of the church is worth noting; a cross is carved on a column in the north aisle and is angled so that light from a window in the north transept illuminates the cross on 3 May (Invention of the Cross day according to the traditional church calendar) and on 14 September (Holy Cross Day).

Many of the other buildings around the inner courtyard that gives shape to the Hospital date from the late medieval and Tudor period. These buildings comprise the medieval hall, kitchen, a second hall (now the tea room), and a Tudor cloister.

There are still 25 lay brothers in permanent residence at St Cross. These are known as Brothers and traditionally wear black or red gowns and a trencher hat. You might expect that visitors would be unwelcome given that the almshouses are still in use, but actually St Cross welcomes visitors. 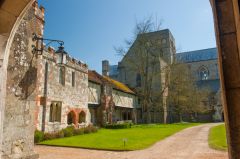 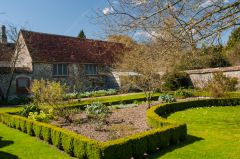 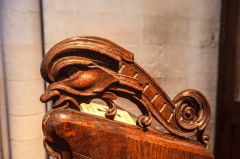