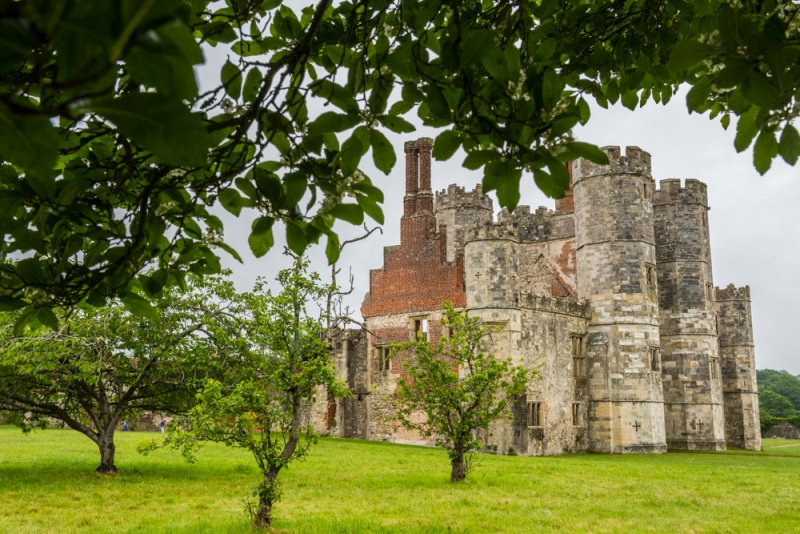 Titchfield Abbey is a fortified manor built upon the ruins of a medieval monastery. The monastery was built in 1237 by the Premonstratensian order. The extensive ruins of the 13th-century abbey are dwarfed by an imposing Tudor gatehouse built from the nave of the abbey church.

In 1232 Peter des Roches, the powerful Bishop of Winchester, founded an abbey for canons of the Premonstratensian order near the River Meon in southern Hampshire. The abbey was dedicated to St Mary and St John the Evangelist and grew to possess large estates throughout the south, with 11 manors and over 5,000 acres of land. 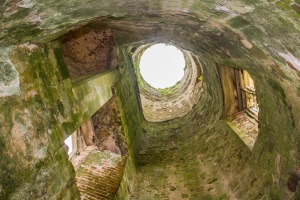 Looking up inside the gatehouse tower
The location of Titchfield made the abbey a good place to stop on journeys from London to ports along the English Channel, and Henry V is known to have stayed at the abbey on at least one of his military campaigns against France.

Titchfield Abbey was never very large; only 14 or 15 canons lived here at the height of the abbey's prosperity, and 2 of these served as priests for nearby parish churches.

When the abbey was dissolved by Henry VIII at the Reformation, its estates passed to Thomas Wriothesley, the 1st Earl of Southampton (see Beaulieu). The Earl rebuilt the monastic buildings into a sumptuous Tudor mansion known as Place House. The west end of the abbey church was converted into an impressive gatehouse entrance to the Palace.

Here the Wriothesleys entertained nobility and monarchs for the next several centuries. The 3rd Earl of Southampton was a patron of William Shakespeare, and it is believed that several of Shakespeare's plays were performed at Place House for the first time, possibly in a private apartment beside the gatehouse.

Edward VI came to Titchfield, as did his half-sister, Elizabeth I. A later visitor was Charles I, who came here with his queen, Henrietta Maria.

As time went by the Earls of Southampton spent more time at other residences, and by the late 18th century Place House was rarely used. The end came in 1781 when the house was torn down and the stone reused for other building projects. 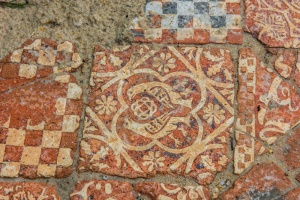 In addition to the magnificent, roofless ruin of the Tudor mansion, the original abbey foundations can be seen. Look for the large collection of well-preserved medieval tiles in the cloister walk. These vividly glazed tiles were covered over when the courtyard for the Tudor mansion was created, and for 4 centuries they lay hidden beneath the courtyard stone. They were rediscovered in 1923 and according to English Heritage are the best collection of medieval tiles in southern England.

One particular tile was oriented so that canons coming to eat in the refectory would see its Latin inscription, which translates as, 'Before you sit down to meat at your table first remember the poor'.

When we visited Titchfield Abbey we didn't see any signs for it on any of the nearby roads until we had almost reached the gates. Unfortunately, it wasn't immediately clear that cars were allowed to drive up the very narrow drive, so we ended up parking at the nearby garden centre and walking to the abbey. As it turned out, visitors are indeed allowed to drive up the gravelled drive to the abbey, where there is a large parking area.

There were just a couple of information panels to explain the site, which is a shame, as it really is quite an impressive ruin. The Tudor gatehouse is a magnificent shell, but what really impressed me were the medieval tiles. Some of the tiles were exceptional, the colours so clear that they could have been made yesterday, not 700 years ago. 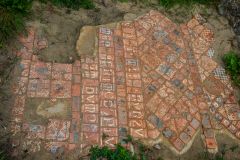 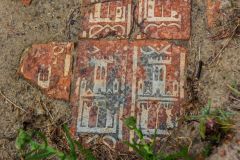 More self catering near Titchfield Abbey >> 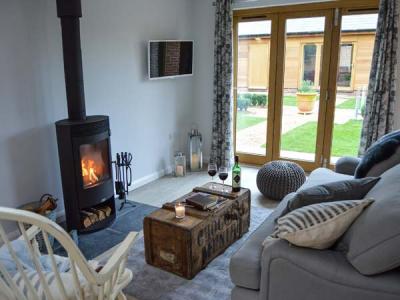 This luxury, contemporary cottage is situated near Titchfield in the South of England and can sleep two people in one bedroom.
Sleeps 2