HERITAGE HIGHLIGHTS:   One of the best examples of Greek Revival style in the country 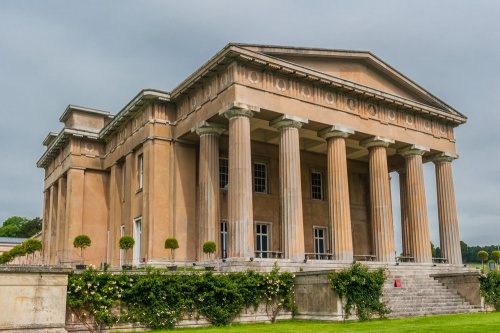 A 17th-century mansion built for Sir Robert Henley, Northington Grange was one of the earliest houses in England built in classical Greek style. The original design was later drastically altered to resemble a Greek temple, making it quite unusable for habitation! The Prince Regent (later George IV) stayed here briefly.

In 1662 Sir Robert Henley bought a country house at Northington, known simply as The Grange. Henley hired William Samwell to rebuild the house to create a grand residence of red brick. This late 17th-century house was utterly transformed from 1804 when the then owner Henry Drummond hired William

Wilkins to create one of the foremost examples of Greek Revival style in the country. Wilkins was an acknowledged expert on Greek architecture, and he created a fabulous neo-classical shell for his employer, complete with an imposing porticoed frontage looking out over the hillside to the wooded river below. The inspiration for the new Northington Grange was the 5th-century Theseion in Athens.

The original brick house was not demolished, rather the new classical house was simply built around the existing structure, essentially creating a house within a house. But after having splashed out all the cash to build his grand Greek house, Drummond decided that he didn't like the result, and he sold The Grange to a neighbour, Alexander Baring, a wealthy London banker.

In 1823 Baring hired Charles Cockerell to build the conservatory, giving it a neoclassical look in keeping with the grand house facade. In 1890 the conservatory was converted into a ballroom, and still later, into a theatre.

In 1975 the house passed into state care and is now looked after by English Heritage. Unlike most historic houses, though, you can't (at this writing) actually view the interiors, as Northington Grange is frequently used for theatre performances, but you are free to wander the grounds and enjoy the rather staggering classical facade.

Note: Access can be confusing. The house is signposted off the B3046, but it isn't immediately obvious where to go once you turn off the main road. Proceed straight ahead down the private drive, winding through the countryside for at least 1/4 mile. The road is full of potholes but is perfectly navigable if you drive slowly. 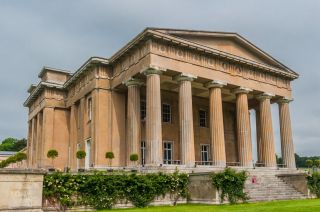 More self catering near Northington Grange >>