HERITAGE HIGHLIGHTS:   The abbey gatehouse is the only substantial remain 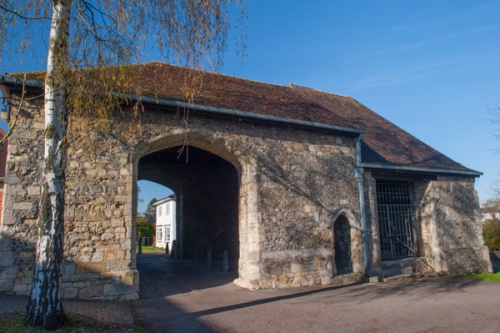 The origins of Hyde Abbey go back to the re-founding of Saxon Winchester by Alfred the Great around the year 880 AD. At that time the Saxon Cathedral and the royal palace jostled for space in the centre of Winchester.

As the city grew, it became apparent that the increasing population needed a new church. Work was begun on a church, called The New Minster, beside the Cathedral (The Old Minster). While work was underway, King Alfred died and was buried in the Old Minster.

When the New Minster was completed around the year 903, the body of Alfred was unearthed and reburied in the new church.

After the Norman Conquest the old Saxon cathedral was rebuilt in grand Norman style, causing the site it shared with the New Minster to become quite cramped. Eventually Henry I ordered the New Minster to be removed to the northern suburb of Hyde, and from that point on the church was known as Hyde Abbey.

The new abbey church was consecrated in 1110, and in a ceremony of great pomp, the bodies of Alfred, his wife Ealhswith, and his son Edward the Elder were carried through Winchester to the new Abbey church, where they were buried before the high altar. The presence of the royals, and the addition of saintly relics, made Hyde abbey a popular pilgrimage destination during the next few centuries.

In 1141 the church suffered damage during the Civil War between supporters of King Stephen and Queen Maude, and it had to be substantially rebuilt. Though never exceedingly rich, the abbey prospered and acquired considerable land in the area, until it was finally dissolved by Henry VIII. 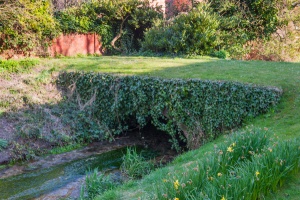 Site of the Abbey millstream

So thoroughly did Henry's men deal with the abbey property that within a year it was said that no trace of the church remained above ground. The only remaining building today is the attractive 15th century gatehouse, which stood between the inner and outer courts of the abbey precincts. Adjoining the gateway is a medieval barn containing 12th century stonework.

Across grass-covered lawns there are mouldering traces of an arch that used to span the abbey millstream. Stones from the abbey were used to rebuild St Bartholomews church nearby, and were scavenged for farm buildings in the area. It is worth visiting St Barts to see five nicely carved capitals from the abbey church.

Other stones from the abbey were used to build the church tower. From 1788 the city lockup occupied the site of the abbey church, but no trace of this or the church itself remains and the area is now built up with modern houses.

In the 19th century a local antiquarian named John Mellor carried out excavations on the abbey site. He discovered bones which he claimed were those of King Alfred, though his claims were not widely accepted. The bones were buried outside St Bartholomew's church in a simple grave.

Hyde Abbey is located just outside the old northern gates of Winchester, an easy stroll from the city centre. Take Hyde Street from North Walls (B3040), then turn onto King Alfred Place. You'll pass St Bartholomew's church before you reach the gateway. 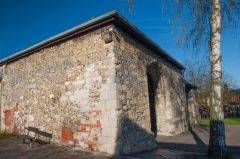 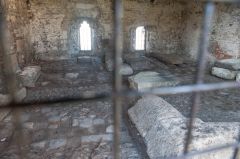 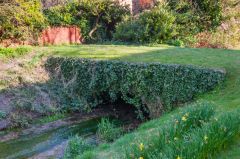 More self catering near Hyde Abbey