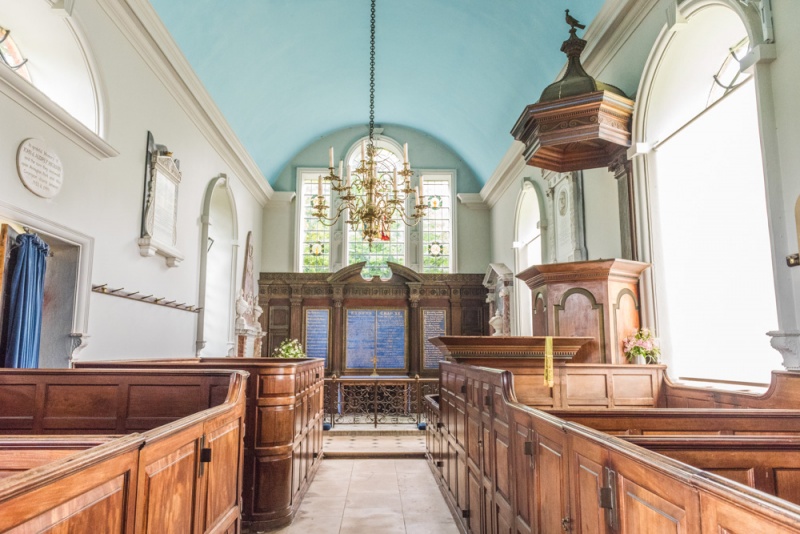 St Mary's church in the Hampshire village of Avington stands just inside the grounds of Avington Park, a historic Georgian mansion beside the River Itchen. St Mary's is a wonderful example of a Georgian church, built of striking red-brick, and thankfully escaped the attentions of Victorian restorers because of its rural location and lack of money. Curiously, though the church is inside the grounds of Avington Park it has never been part of the estate.

There was a medieval church on this spot above the mansion, but Margaret Brydges, Marchioness of Carnarvon decided to rebuilt it in fashionable 18th-century style. Unfortunately, she did not live to see the church completed; she died in 1768 at the age of just 34.

The church was finished in 1771, and holds a marble memorial to Lady Carnarvon, with a long eulogy of her many merits. Her grieving husband makes his feelings clear; 'Best of women! Most unfortunate of Men'.

The exterior of the building is severe, and has been compared to an industrial building, but the interior is a delight. The first thing you notice is the richly carved mahogany box pews, with seats facing the centre aisle. The largest pew, with a carved interior and well-padded seats, was reserved for the manor house inhabitants. 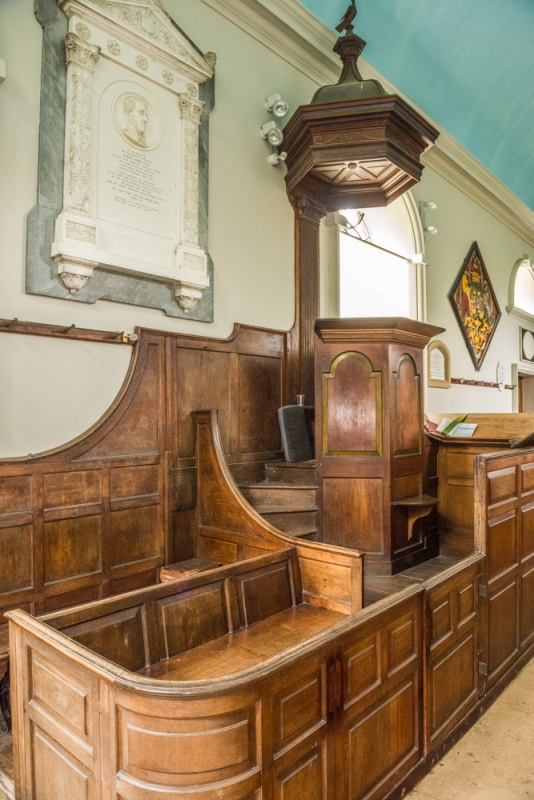 The wood is said to have come from a Spanish ship captured in the defeat of the Armada in 1588 by the Duke of Effingham. One has to wonder what happened to the wood in the intervening 2 centuries.

Dominating the nave is a huge three-decker pulpit, also of mahogany, reached by steep stairs. On the wall is a funeral hatchment to Anna Brydges. The hatchment would have hung over the door of Avington Park House for several months after her death before being moved into the church.

The walls are painted white, and the barrel-vaulted ceiling a pale blue, making the interior seem light and spacious. The sense of spaciousness is enhanced by the fact that most of the window glass is clear, filling the interior with soft light. On the walls are hat pegs for gentlemen to hang their wigs on during services.

The layout of the church makes it clear that it was designed for sermons, not for sacraments. The altar is not even visible from many of the box pew seats.

The east window holds the only non-original glass in the church. The window, in Palladian style, is inset with stained glass in memory of William Green, rector of Avington from 1872-1896. It was designed by James Powell of Whitefriar's Glassworks in London, and the Archdeacon of Winchester paid for the central light.

On the south side of the chancel is a memorial to George Brydges of Avington Park, who died in 1751. Other memorials include that of Anna, Duchess of Buckingham and Chandos (d. 1836). When the Duchess died she was buried in a glass coffin, under the floor on the north side of the church. 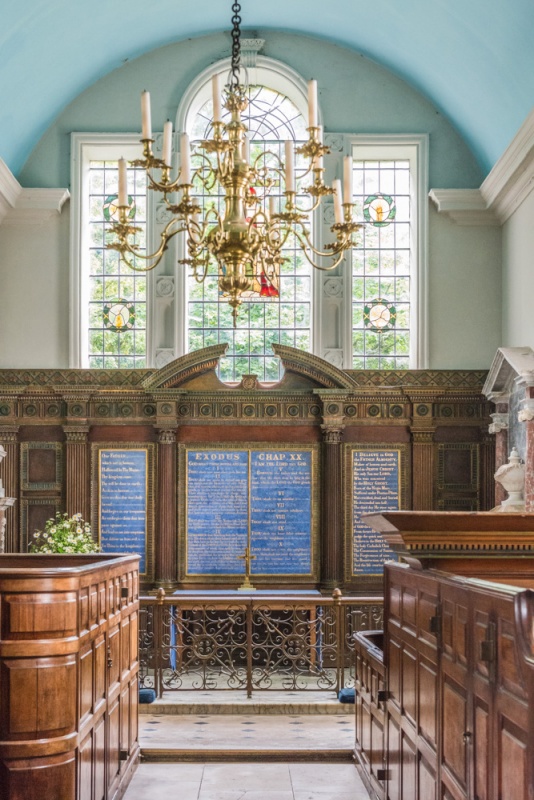 The chancel and altar

At the west end is a gallery, with two rows of seats for musicians. The gallery is supported on slender wooden pillars, and holds a beautifully crafted barrel organ installed in 1849 and still in use. Hanging from the gallery is a royal coat of arms to George III, dated 1771.

Though the church stands within the grounds of Avington Park there is a path from the roadway, screened from the mansion by an avenue of trees.

We came to Avington to visit the mansion house on one of their open days. When we saw the tower of St Mary's poking through the trees above the house we knew we had to explore it after our house tour was over. We're glad we did, for it is a wonderful historic building. As soon as you enter the door you feel transported back to Georgian times.

It is rare to find such an unaltered Georgian church. St Mary's is a delight; a wonderful country church where time seems to have stood still since the late 18th century. 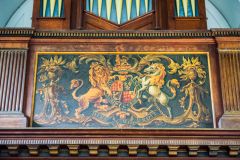 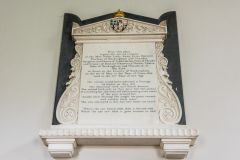 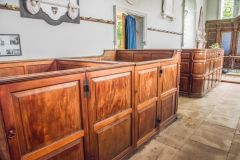 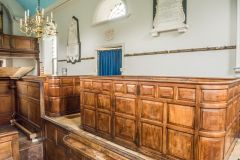 More self catering near Avington

More bed and breakfasts near Avington