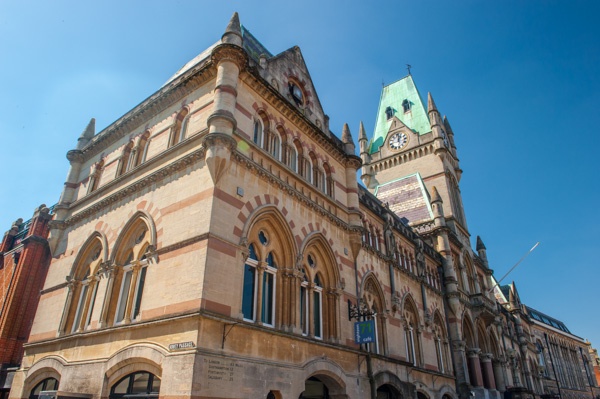 The refurbished 19th-century Guildhall, above the Tourist Office, is a wonderful Victorian building in the centre of Winchester, just a short stroll from all major tourist attractions. For many years the Guildhall served as an art gallery exhibiting works by local artists, but now it acts as an event venue, with rooms created from the original 19th-century chambers made for civic government functions.

The Guildhall was built from 1871-1875 to a design by architects Skiller and Jeffrey. This era was the height of Victorian interest in medieval Gothic architecture so the style is Middle Pointed Gothic, made of sandstone with red stone dressing, under a slate roof. In 1892 a two-storey extension in flint was added to the west end, designed by JB Colson.

The facade includes statues of 4 kings and bishops with links to Winchester. Below the clock tower is a panel depicting the first mayor of Winchester, Florence de Lunne, receiving the city's charter from King Henry II in 1184. Unfortunately, the tale is a myth, for the first written record of a mayor comes from 1200.

The Guildhall stands on the site of an estate given by Alfred the Great to his wife Ealswith as a coronation gift in AD 871. After Alfred's death, the queen retired to Winchester and established a nunnery known as Nunnaminster, later to become St Mary's Abbey.

When Henry VIII suppressed the Abbey in 1539 the site passed to the crown. In 1554 Winchester hosted the wedding ceremony of Mary I to Philip of Spain, and the cost of the event crippled the city's economy. Mary granted the former nunnery site to the civic government as reparation.

The Local Reform Act of 1835 gave the city more responsibility for local government, and a new space for city administration was needed. The Guildhall was begun in 1871 and opened officially in 1873. Aside from the civic areas, the Guildhall included space for law courts, the fire brigade, and a police station. The fire brigade and police station space were demolished in 1892 when a new wing was added to house the city library and art school. 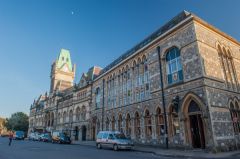 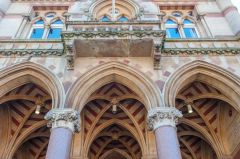 More self catering near Winchester Guildhall