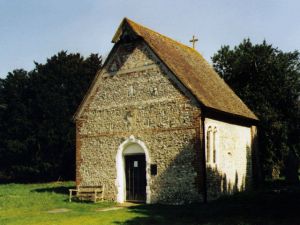 Preston Candover, St Mary's Church
The chancel of St Mary the Virgin at Preston Candover is all that remains of a medieval church, much rebuilt after a fire in 1681. The rest of the church was demolished when a new parish church was built in 1884.

The church probably dates to the late Norman period, around AD 1190, but few traces of this early medieval origin remains, apart from a narrow lancet window and some medieval floor tiles. The 17th-century church probably consisted of a rectangular single-cell structure with transepts and a western bellcote.

There are fragmentary wall paintings, probably 18th century in date, and the interior is replete with memorials. Four 18th century marble wall tablets are set on the walls. Perhaps the most interesting of these is a floor tablet, incorporating a memorial brass to Katherine Dabridgecourt (d. 1607). Outside the church is a sundial incorporating a Norman base and capital, both installed upside-down!

The chancel is constructed of flint dressed with stone and uses bricks for the quoins. The only exception is the west wall, built of rubble when the rest of the church was torn down in 1884. In the north wall is a late 12th-century lancet window. There are also 17th-century altar rails and a pair of painted boards on the west wall bearing the Ten Commandments.

In the south wall are a blocked priest's door from the same period and a later Perpendicular window. The east end has a simple single-light lancet window and a simple wooden bellcote is set over the western gable.

The church is no longer used for regular worship and is in the care of the Churches Conservation Trust, who keep it open most days.