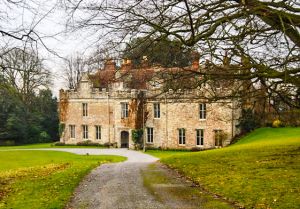 Boughton Monchelsea has a history dating back to at least the 13th century. The Hougham family are recorded as the owners in 1214. When the line of direct male descent died out in 1317 it passed by marriage through several generations before it was sold to Reginald Peckham in 1460. It was sold on twice more until Robert Rudston purchased the manor in 1551.

We owe the current Boughton Monchelsea house to Rudston, but his involvement was almost a very short one; he was involved in the abortive Wyatt's Rebellion against Mary I in 1554 and his property was seized by the crown. He escaped the death sentence that met many of his fellow conspirators, and when Elizabeth I came to the throne she restored his estates. From 1567 Rudston extended the earlier house, forming the first part of the current building. The house is built of Kentish ragstone, with an L-shaped two-storey main block forming two sides of a quadrangle, with the remaining two sides formed by single storey service wings.

The interiors are a wonderful mix of time periods, from Tudor to Georgian Gothic to Victorian. The house has remained essentially unaltered from the late 18th century. Highlights include 16th and 17th century stained glass windows, marble fireplaces, Elizabethan panelling, and a Jacobean galleried staircase. Very little of the furniture is original to the house; it was almost entirely brought to Monchelsea in the Victorian period.

The house stands in over 150 acres of beautiful parklands, with wide-reaching views across the Kentish Weald. There are bluebell woods, a walled garden, and a deer park centred on a large lake. The kitchen gardens are all that remains of a 16th-century formal garden. The Greensand Way long distance trail passes through the parkland with views to the house.

Pre-booked groups are welcome to explore the stunning gardens. Boughton Monchelsea Place hosts open-air theatre on two summer weekends and the gardens are open for charity twice a year.