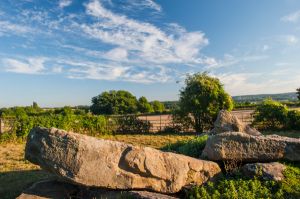 Drawings by 18th-century antiquarian William Stukeley suggest that Little Kit's Coty may have been a long barrow. If so, there is no longer any evidence of a barrow on the site. There are several other standing stones in the area, and it has been suggested that these were the remains of similar burials or barrows.

Access to the site is theoretically easy; there is a short path off Rochester Road, signed by a brown English Heritage footpath sign. However, there is no parking area nearby, not even a convenient layby. Here's our suggestion: park on Old Chatham Road, near its junction with Chatham Road, and follow the North Downs Way long-distance footpath to Kits Coty, then, once you've seen the dolmen, continue on down the hill for Little Kits Coty.

It makes for a longer trip - roughly 30-40 minutes to explore both sites and retrace your steps - but at least there's a safe place to park and you get to see both sites in one go. For a more detailed look at where to park and how to reach both sites see our article on Kits Coty House.

As for the site itself, though it is small and doesn't take long to explore, I actually found it rather intriguing. There are so many stones fallen in a large group that it is intriguing to work out how the site might have originally looked. Also, unlike many barrows, the Countless Stones were erected on flat land in a valley bottom, where most similar monuments were built on or near the brow of a hill. 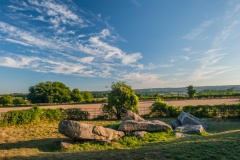 View from the south-east 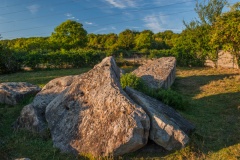 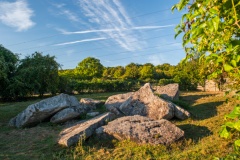 View from the west side of the site 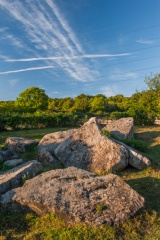 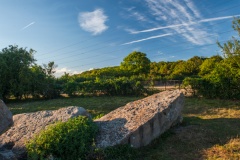