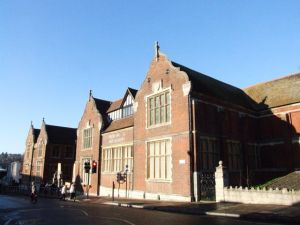 Maidstone Museum & Bentlif Art Gallery
The Maidstone Museum first opened its doors in 1858, but the location has a much longer history, for the museum is housed in Chillington Manor, a historic Elizabethan manor house that dates back to 1562. The Cloisters and Long Gallery date even further back to an earlier Tudor building. The manor was given to the town of Maidstone in 1855 by Thomas Charles, a successful surgeon and antiquarian.

The museum has expanded since those early days to include over 660,000 artefacts covering a wide range of subjects. Among the museum galleries are exhibits covering Ancient Egypt, Archaeology, Costume, Ethnography, Biology, Fine & Decorative Art, Geology, and Local History. There is also a special section on Japanese Decorative Arts & Prints. There is also an ongoing programme of special events.

A special wing added to the east side of the old manor house houses the Bentlif Art Gallery, founded by a bequest from Samuel Bentlif in honour of his brother George. The gallery began with 200 paintings donated by Bentlif.

The collection of fine art deserves special mention; with 574 oil paintings, it is the largest publicly owned collection in Kent and includes several Italian Old Masters. Also located within the Maidstone Museum is The Queens Own Royal West Kent Regiment Museum.

As of this writing, the museum is open without admission charge every day except Christmas, Boxing Day, and New Years Day.