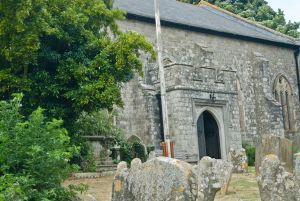 The first stone church at Sutton Valence dates to the early Norman period, though there was almost certainly a church here before the Norman Conquest.

The church was in the hands of the lords of Sutton Valence until 1396, when it was granted to the Prior and Convent of Leeds. At the Reformation Henry VIII granted it to the Dean and Chapter of Rochester, but in 1914 it finally passed to the Archbishop of Canterbury, where it remains.

The list of former rectors, vicars, and curates is of interest. Ricardus de Hannyngfield, the rector in 1326, was royal chaplain to Edward II and undertook a mission abroad on behalf of the king.

Nicholas Wooton, vicar from 1519-1530 was a privy councillor to four Tudor monarchs, and a royal ambassador. Later, John Gohier, the vicar in 1690, became a Canon of St Paul's Cathedral. On a less positive note, Thomas Scriven, the vicar in 1386, was deprived of the living by the Archbishop after he beat his wife.

A later vicar, Edmund Henshaw (1614), was responsible for having the local constable thrown into gaol for being regularly late for evening prayer and refusing to take an oath. The unfortunate constable was cleared of the charges by a civil court, but that did not stop him from being imprisoned by church officials for 15 years for his 'crimes'.

There was a sizeable 14th-century building here, but by the 19th century that building had become unsafe, and in 1823 the decision was made to pull it down and build a new church. Initial estimates for the job quoted a figure of £3,000, but when the work was actually undertaken that figure rose to over £6,000, proving, perhaps, that escalating building costs are not a modern phenomenon!

One of the few remaining bits of the old church to survive is a pair of grotesquely carved corbels at the east end of the aisle arches. The font was reused, and has been partially restored.

The most notable historical feature of Sutton Valence church is, sadly, no longer to be found in the church. This is the unusual 14th-century altarpiece, carved by English craftsmen from Caen stone. The altarpiece is in a form of triptych, with a central figure of a Madonna and Child. This central section is flanked by two smaller panels topped by canopies. There were possibly two further panels, now lost. In 1921 the Sutton Valence altarpiece was purchased by the Victoria and Albert Museum in London, where it can now be seen.

At the east end of the churchyard is a memorial to John Wilkes of Sutton Valence. Wilkes is credited with being the first to introduce the concept of round-arm bowling to the game of cricket. Unfortunately, his new method was initially ill-received, and when he tried to use it in a match at Lords the delivery was called a no-ball, after which Wilkes decided to retire from the sport!

In the north aisle is a coffin slab carved with a raised cross, believed to date to the 13th or 14th century. This may possibly be the tomb of Radulphus (Rauf) de Sutton, rector in 1319, who is known to have been buried in the chancel of the old church. 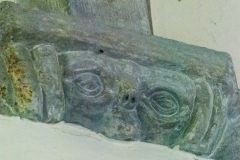