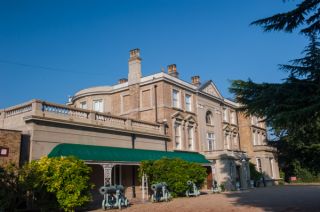 Powell-Cotton Museum, Quex House and Gardens
The stately home of Quex House is home to the Powell-Cotton collection of African artefacts and natural history. Over the years 1885 to 1939 Major Percy Powell-Cotton and his family amassed an amazing collection of oddments, from mammals to carvings, covering Africa, India, and the Far East. Most of the collection is on display in a specially built museum beside the early 19th-century house, but the house itself is bursting at the seams with curiosities gathered from all over the globe.
In 1803 architect Thomas Hardwick designed a refined, elegant mansion for John Powell Powell. Though John had the house built, it is his descendent Major Percy Powell-Cotton who left his indelible mark upon Quex. Born in 1866, Powell-Cotton was the prototypical Victorian explorer. He led no fewer than 28 trips to Asia and Africa. Even his honeymoon was spent living with a tribe of African pygmies, and the newspapers made much of the fact that his new wife Hannah was the first European white woman 'in the land of the pygmies'.

Like many contemporary explorers, Powell-Cotton was an enthusiastic hunter, and, as Simon Jenkins rather graphically puts it in his 'England's Thousand Best Houses' book, 'he killed anything that moved'. On one occasion his enthusiasm for big game hunting almost resulted in his death, when a wounded lion charged him. He was saved by the actions of his porters, who managed to distract the lion from mauling the Major, and kill it. Powell-Cotton was left with claw wounds and a badly torn suit, which is on display near the museum entrance. 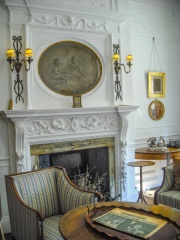 House interior, Quex Park
The intrepid Major was not only a hunter but a pioneer in the use of photography to record animals in their natural habitat. He was one of the first wildlife photographers, using binocular lenses and glass-plate negatives to capture his images, and enthusiastically took up cine filming when the first 'moving picture' technology became available.

The end result of Powell-Cotton's explorations is a remarkable collection of over 500 cultural artefacts, stuffed and mounted animals, and mementoes of his travels. Among the items on show is an impressive collection of Chinese Ching dynasty Imperial porcelain. One of the things that really sets the Powell-Cotton collections apart is that the Major was a meticulous note-taker; he recorded in exacting detail the provenance of each cultural item and how it was used. The collection is fascinating for its cultural significance, but also for what it reveals about the late Victorian attitudes and values.

The house itself, though full of items collected by family travellers, is a comfortable Victorian home, all leather and genteel clutter. The exterior of the house dates from the 1880s but doesn't stray too far from the original 1803 design. The original house had a grand staircase of stone, but this was replaced by a wonderful oak stair. Upstairs rooms include a library, boudoir, and bedroom, much of it faithful to Hardwick's design. In the Library is a fascinating 'rolling ball' clock by Congreve, while at the top of the stairs is a 17th-century Italian marble bust of Democritus, 'The Laughing Philosopher', a gift of Lord Holland.

15 acres of gardens surround Quex House. Here you will find a Victorian walled garden, open lawns, exotic trees, woodland walks, and a wildlife pond. Also in the grounds - though not always open to view - is the extremely peculiar family mausoleum, built for John Powell Powell to house his collection of 12 bells. It is one of the very few secular bell towers in England still in use and is topped by a cage-like structure of cast iron that can best be described as something like the Eiffel Tower with a curving base, but in fact, it is modelled after the spire of Faversham church.

The house has limited opening hours but is well worth taking the time to view. And though the garden setting is wonderful, the real attraction for most visitors to Quex is the museum, which ought to be on every itinerary to south-east Kent! 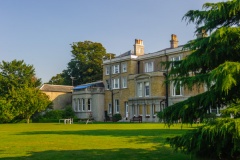 The rear facade of Quex House 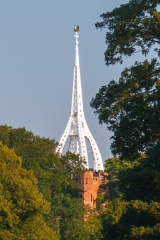 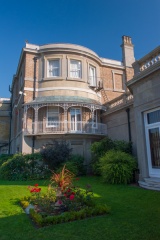 Rear of the house 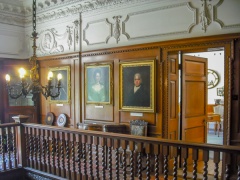 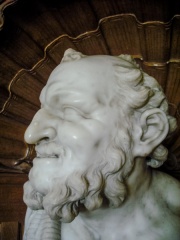 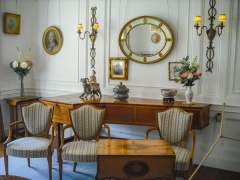 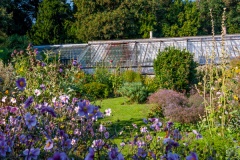 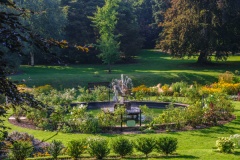 Garden fountain behind the house 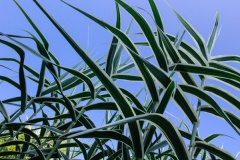 Bamboo in the walled garden


PHOTOS FROM THE POWELL-COTTON MUSEUM 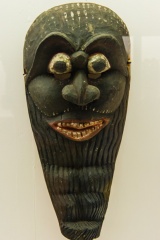 Mask of the Hindu god Sakra 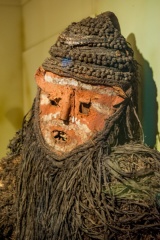 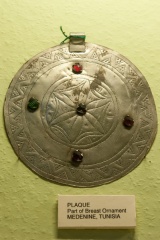 More self catering near Powell-Cotton Museum, Quex House and Gardens >>