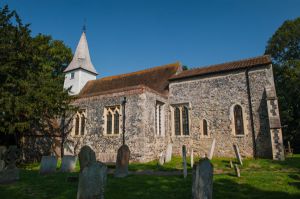 West Stourmouth, All Saints Church
An isolated county church dating to the Saxon period, All Saints incorporates Roman bricks in its walls. The church stands is a lovely rural setting near to the River Stour.

All Saints was damaged in an earthquake in 1382 and was subsequently rebuilt. The building is simple, made of ragstone, flint, and brick, with a nave, chancel, south aisle, and small wooden bell tower.

The porch is 15th century and retains its original door. Beside the door, protected from the elements, is a worn 13th-century coffin lid. On the inner face of the doorway is a royal coat of arms from the reign of George III in a peculiar pyramidal frame.

To the west of the door is the octagonal font. There is no information on the font in the church but it appears to be Victorian, or perhaps an earlier font that was recut in the Victorian period. On the floor by the font is a memorial slab to the infant son of an 18th-century vicar, who tragically died aged '6 months and odd days'. 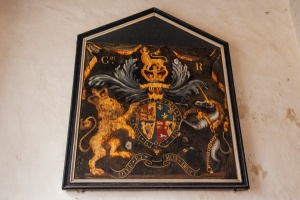 The richly carved pews at the west end of the church are worth a close look. Those against the back wall date from the 19th century and feature a frieze and bosses made of papier-mache. So well is the work done - and so dim the interior lighting - that we had to look closely to see which parts of the decoration were original wood and which were papier-mache!

At the west end of the church are thick timber beams, inserted in the 14th century to carry the weight of the bell tower above. High in the north-west corner, half-hidden by these beams, is a blocked Saxon window, the only original window in the church.

On the north-west nave arcade is an intriguing monument to Carr Culmer. The date of his death is shown as 10 January 1835, 100 years and 9 days after his birth. However, in 1752 the calendar was adjusted, losing 11 days in the process, meaning that technically he was two days short of a century when he died!

The beautifully carved south nave arcade dates from about 1200 and is thought to have been crafted by a team of French masons on their way home after working on Canterbury Cathedral.

Hung on the nave arcading is a series of four 18th-century text boards, with Biblical verses painted on wooden boards. There is a cut-down 15th-century wooden screen dividing the chancel from the nave, and a very nice Jacobean pulpit. There are Georgian box pews and a tiled floor with several inset memorial stones.

In the centre of the chancel floor are a pair of ledger slabs with nicely carved heraldic arms. One of these is to Thomas Blake, who must have died very suddenly, for the inscription describes him as 'in the strictest sense being alive in health and dead in the same moment'. Near the ledger slabs is a nicely preserved 15th-century memorial brass to a former rector named Thomas Mareys, showing him in his priestly robes.

The south chancel window showcases several fragments of medieval glass, gathered here by the firm of James Powell and Son, who in 1846 designed the colourful glass in the east window. The likeness of St Peter in another chancel window is thought to have been designed by an incumbent vicar. Perhaps he was trying to save a bit of church funds, or perhaps he just enjoyed creating stained glass. The result is actually not displeasing.

I loved this church. The setting is idyllic, in a peaceful, green setting up a long, winding country lane. The church does not have any particularly outstanding architectural features, but the combination of its ancient beginnings, the peaceful setting, and the rural fittings make West Stourmouth a delight to visit. I loved the fact that some of the Victorian stained glass windows were hand-made by the vicar; a bit of 19th-century DIY! 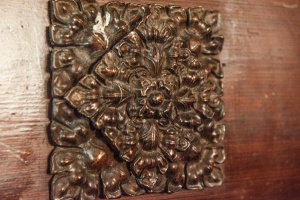 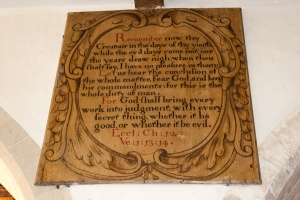 18th-century text board in the nave 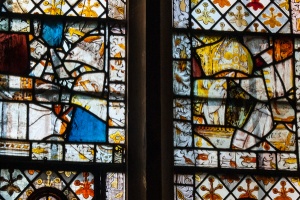 Medieval stained glass in the chancel 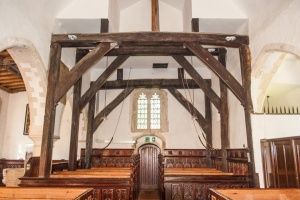 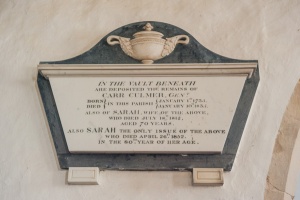 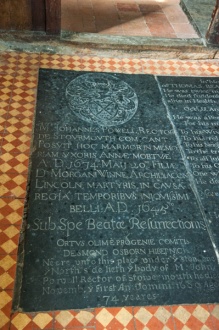 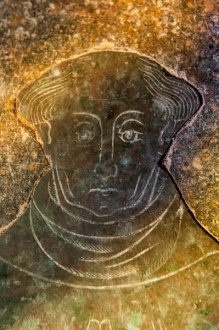 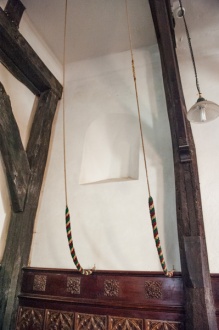 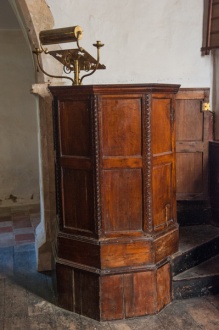 More self catering near West Stourmouth, All Saints Church >>

More bed and breakfasts near West Stourmouth, All Saints Church >>