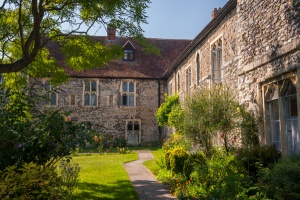 The roots of Minster Abbey go back to a 7th-century crime. Two brothers, members of the Mercian royal family, were staying at the court of their uncle, King Egbert of Kent. The brothers fell afoul of court intrigue and were murdered. Their elder sister, Queen Ermenburga of Mercia, came to Kent to claim the customary weregild, or compensation fee offered to the family of a murdered man. With Ermenburga came her two young daughters, Mildred and Milgitha.

Now, instead of simply taking the weregild 'blood money', Ermenburga asked Egbert for land to found a monastery. The contrite Egbert agreed, but according to legend, put a condition upon the gift. For it seems that Ermenburga owned a pet deer, which she brought with her to Kent.

Egbert agreed to donate land on the Isle of Thanet, with the boundary to be determined by the course the deer took if left to wander across the island on its own. In those days Thanet was a large island, cut off from the Kentish mainland by a wide channel, stretching from Reculver in the north to Richborough on the south coast. The deer was duly released and took a wandering path across Thanet which eventually took in a huge amount of land in the south of the island.

The lands between the deer's course and the Wentsum Channel was then awarded by Egbert to the newly founded abbey at Minster. The modern chapel at Minster Abbey recalls this tale; there is a large and very striking carving of Ermenburga and her deer on the side of the building. 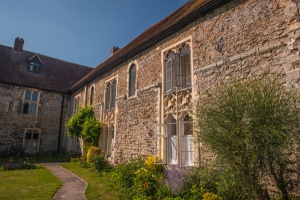 The first monastery was built where the large medieval parish church now stands, several hundred yards away from the current abbey grounds, but perfectly placed for a natural harbour which led into the Wentsum Channel. It was the harbour that led to Minster's prosperity over the ensuing centuries, allowing grain from Kent to be shipped to London.

Minster Abbey was consecrated in 670 by St Theodore, then Archbishop of Canterbury. The first abbess was Ermenburga, who had taken the name Domna Eva on taking vows. Domna Eva's daughter Mildred later joined the abbey as well.

When Domna Eva retired in 690, Mildred became abbess of Minster. The new abbess was famed for her generosity to the poor and was a well-loved figure in the area. She died in 725AD, but even 3 centuries later, in 1097 the chronicler Goscelin called her 'the fairest lily of the English'. She was eventually beatified as St Mildred in 1388.

By 741AD the abbey had outgrown its original buildings, with about 70 nuns having joined the community. So the 3rd abbess, St Edburga, decided to build new monastic buildings a short distance away, on the site of the present abbey. These 8th-century buildings were of timber, probably topped by thatch, or lead roofs.

A new chapel was erected, dedicated to St Peter and St Paul. Under the leadership of Edburga, Minster supported missionary work in Europe, particularly that of St Boniface in Germany. The kings of Kent added more land to the original abbey estates, and under Edburga Minster eventually controlled fully half of Thanet. 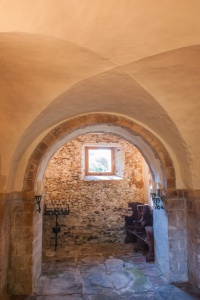 The Arrival of the Danes

But this period of growth and prosperity was not to continue, and in the late 8th century the Danes appeared in the longboats, bent on plunder. The first Danish raid was recorded in AD 753, but the Danes were a constant threat for the next 2 centuries and more.

In 797 the fifth abbess, Seldritha, took over, but her efforts to rebuild the abbey's fortunes were dealt an ultimately fatal blow in 840 when the Danes burned Minster to the ground and killed the entire monastic community of nuns and servants.

With the death of the nuns, the monastic estates reverted to the kings of Kent, and the monastery was finished. 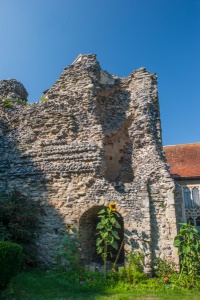 In 1027, over 180 years after the final Danish raid, the monks of Canterbury petitioned King Canute to give them the abbey lands. Canute agreed, and the monks began to rebuild the earlier timber buildings in stone. But that wasn't all; they asked that the relics of St Mildred be transferred to them.

The king eventually agreed, but the townsfolk of Minster were not likely to agree to have the relics of their beloved saint taken away. One account suggests that 4 monks of Canterbury raided Mildred's tomb in the dead of night, stole the relics, and managed to make it to the ferry at Sarre before the alarmed townsfolk could catch them.

Worse was to come, for after William the Conqueror and his Normans invaded England, they laid waste to Thanet, so that if the Danes raided they would find no food or stronghold. The devastation of Thanet must have terrible for the inhabitants, and an account in 1097 says that the abbey chapel was roofless and neglected.

When the Danish threat receded the inhabitants of Thanet gradually returned, and they built dwellings on the foundations of St Mildred's monastery, and erected a church, presumably over the saint's shrine.

Over the next few decades, the abbey was gradually rebuilt and expanded by the Abbots of Canterbury. In the 12th century, a single-storey hall was added to the Saxon wing, and in 1413 both were raised to 2 storeys by Abbot Thomas Hunden of Canterbury. Abbot Hunden was also responsible for the large mullioned windows in the Saxon west wing. Abbot Hunden's monogram is engraved on the north door of the Norman wing. 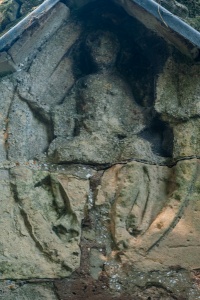 The abbey was dissolved by Henry VIII in 1538, and both the church and manor became royal property. The chapel was destroyed and the monastic buildings allowed to decay. Throughout this tumultuous period, however, the north and west wings survived relatively intact. Like so many monastic sites, Minster passed through numerous hands over the following centuries. But where so many other sites around England fell into complete ruin, Minster had a different fate.

In 1937 a group of Benedictine nuns from southern Germany took possession of the site and established a new monastery at Minster. They had scarcely begun to integrate themselves into local society when the Second World War broke out.

Being German, the nuns were considered a security threat by the government and the nunnery was temporarily suspended and the nuns interned for the duration of the war. In this case the internment could have been worse, for they were sent to existing British monasteries.

After the war they returned to Minster, and over the ensuing decades rebuilt the medieval buildings and added new ones. One of the most recent additions is a modern chapel, but even there the link with Minster's past is not forgotten, for the relics of St Mildred are stored in a reliquary within the chapel. 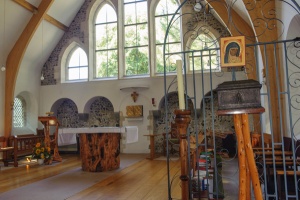 The chapel interior with St Mildred's
reliquary in the right foreground

The oldest part of the abbey is the west wing, built around 1027 and restored after the Norman destruction of 1085. The distinctive Saxon herringbone stonework can still be seen, pierced by narrow rectangular windows in the east wall.

Joining the west wing is the 12th century Norman Great Hall, divided into four bays, with round-headed windows in the upper stages. When the Great Hall was built a passage was made through the Saxon wing. This vaulted passage is one of the highlights of the visitor tour, and shows traditional Norman vaulting technique and stonework, creating a very atmospheric set of low chambers.

In the 1930s excavations revealed the plan of the Norman chapel, but this is now buried under turf. However, in dry weather the outline of the foundations can be seen on the lawn.

The most obvious medieval remains are the large west tower, now a crumbling, and rather romantic, ruin. The tower probably served as a place of refuge in times of trouble, and as a lookout for Danish raiders. It was a massive structure, with buttressed corners 37 feet apart and a spiral stair built into the thickness of the north wall.

Around the side of the tower, set into a stone archway, is a medieval carving of Christ in Majesty. This carving, of a subject often used to decorate tympana over church doorways, was found in a pile of rubble by one of the post-medieval owners of the Minster estate and rescued from oblivion.

The abbey is a practising Benedictine community, but there are regular, free tours of the site (check the abbey website for details). I was fortunate enough to attend one of the tours and I found it a delight. The very friendly guide told us about the history of the site, the establishment of the 7th-century nunnery, and the personalities involved. She showed us into the vaulted Norman passage under the Saxon wing and took us around the tower to look at the medieval tympanum carving.

We were able to explore the chapel, but not the Norman wing, as that is still in use by the nuns. The tour was short, about 30 minutes, but extremely enjoyable, and gave me a real appreciation for the rich history of the site, which has one of the oldest buildings in England still in use. The abbey is set in quite wonderful gardens, and seems a veritable oasis of calm; quite a contrast to the turbulent history of this ancient site.

More self catering near Minster Abbey