HERITAGE HIGHLIGHTS:   Associations with the Duke of Wellington, who died here in 1852 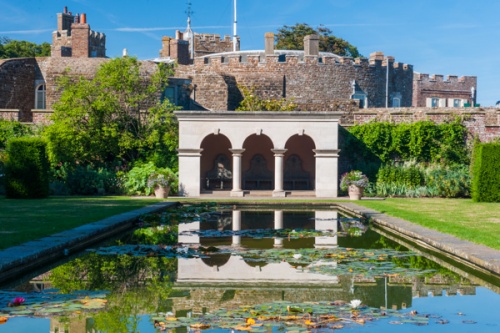 Not a castle in the traditional sense, Walmer is a coastal artillery fort built by Henry VIII to counter the threat of a French invasion. Over time Walmer evolved from its original purpose to become a comfortable country residence. It was inhabited by the Duke of Wellington in his role as Lord Warden of the Cinque Ports, and it was here that the victor of Waterloo died in 1852. There are displays on Wellington and the role of the Lord Warden.

When France and the Holy Roman Empire became allies in 1538, Henry VIII knew that England was under threat from the combined might of Europe's foremost military powers. To counter that threat Henry built a series of forts along the coast. Three of those forts, at Deal, Sandown, and Walmer, protected the Kentish Downs, a logical place for an invasion landing.

Walmer was the most southerly of the three forts and was connected to nearby Deal via an earthwork wall strengthened with guard towers. Nothing now remains of the earthworks, but Walmer and Deal are in excellent condition.

Where Deal remains a strictly - even severely - military fort, Walmer has softened edges; the Tudor fort has been drastically altered with the addition of comfortable rooms within the walls and beautiful gardens outside, making it a cosy, though not extravagant, country residence.

Though constructed at the same time as Deal, it is considerably simpler in plan, with a central tower surrounded by a curtain wall with four semi-circular lobes, forming a quatrefoil pattern. 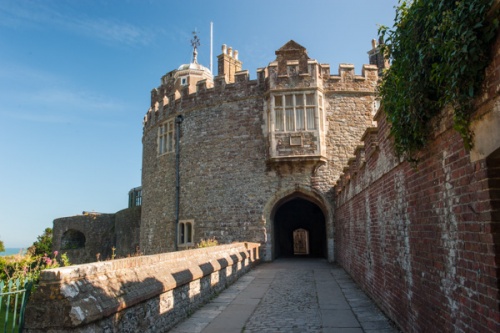 The main entrance to Walmer Castle

The fort was in use until 1708, when it ceased to be militarily important and was converted for use as the official residence of the Lord Warden of the Cinque Ports. Though an ancient post and one which was important in the Middle Ages, by the early 18th century the Lord Warden position was little more than an honorary sinecure.

To make the castle into a residence must not have been an easy process. Gardens filled the ditch between tower and curtain wall, and gun embrasures were replaced by wide windows, but the curving Tudor walls did not lend themselves to inserting rectangular Georgian inner walls.

The result is a peculiar interior, where some floors do not meet the curving outer walls. Walmer certainly has a character unlike any other house I've ever visited. A section of the central keep was removed to provide access to a new range of state apartments.

Further accommodation was provided in 1860 when the main entrance lobe was heightened. The facade of Walmer bristles with battlements, but these are pure theatre; there for show. The originals would have been rounded to deflect cannonballs. 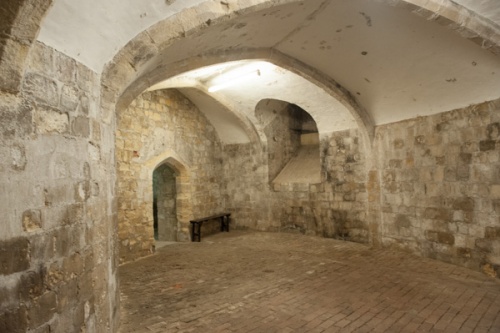 Tudor storerooms in the castle basement

The main interest at Walmer is the south range of apartments, devoted to an exhibition on the Duke of Wellington. Included in these rooms is the chamber in which Wellington died, indeed, the camp bed in which he breathed his last is preserved, as is the chair in which he spent his final days.

The exhibition includes the Duke's death mask, showing his distinctive hook nose had lost none of its sharpness with age! In a display case near the mask are a pair of very early Wellington boots, with a hand-written note from Wellington to his bootmaker, explaining just how to cut the new style of boots to his taste. These are, if not the original 'wellies', at least one of the first few pairs.

Outside the castle - and only accessible through the lower floor rooms - are the gardens. Of these, by far the most intriguing is a water garden dedicated to Queen Elizabeth, the Queen Mother. This features a long, rectangular canal, with a distinctive white garden house at one end. The view across the canal to the concentric towers of the Tudor fort is probably the iconic view of Walmer that most people will recall.

I enjoyed visiting the castle. The interiors are very 'un-castle-like' with only a couple of bare basement chambers showing the Tudor beginnings of the structure. The furnished rooms are unremarkable in themselves, but intriguing particularly for their association with the Duke of Wellington.

The gardens are a delight, though it does not take terribly long to explore them. I suggest combining a visit to Walmer with Deal, only a mile away. The contrast between the two castles could not be more striking.

Garden: Gardens surrounding the Tudor artillery fort that later became the official residence of the Lord Warden of the Cinque Ports. The moats of the fort were filled in and planted with flowers; there are woodland walks, herbaceous borders, a working kitchen garden, and yew hedges. Many people come to Walmer just for the gardens! 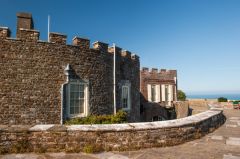 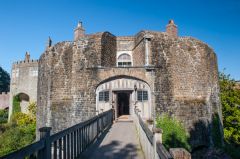 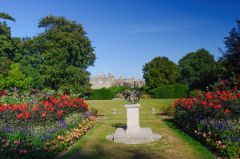 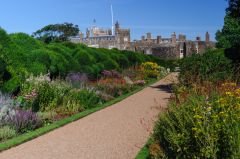 More self catering near Walmer Castle and Gardens >>

More bed and breakfasts near Walmer Castle and Gardens >> 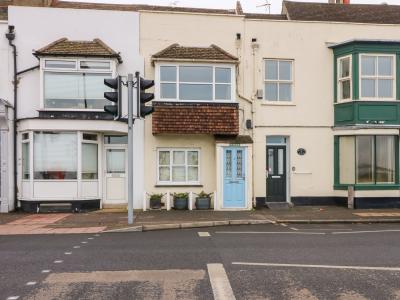 A mid-terrace cottage resting within the town of Walmer. Inside, you will find two bedrooms which can sleep up to four people.
Sleeps 4