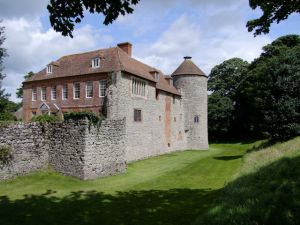 Westenhanger Castle and Barns
A partly-derelict castle with 12th-century roots. The ruined Rosamund's Tower in the north wall is reputed to be a trysting place for King Henry II and his mistress, Rosamund de Clifford (Fair Rosamund). Westenhanger was later expanded by Henry VIII.
History
The origins of Westenhanger Castle go back to at least the Saxon period, and evidence of Roman habitation has been discovered nearby. It seems quite possible that Saxon kings once lived on this spot, but the earliest known record of a castle here comes from 1343, when Edward III granted Sir John de Criol a license to crenellate, suggesting that there was already a sizeable property already standing, perhaps a hall surrounded by a moat.

Around 1400 a strong curtain wall was built around the site and strengthened with towers. The next major development of the castle came in 1509 when the manors of Westenhanger and Ostenhanger were merged into one, under the ownership of Sir Edward Poynings. Sir Edward embarked on a prodigious programme of expansion, but he died in 1522 before work was complete.

His son, Sir Thomas Poynings, completed his father's work, but then exchanged Westenhanger with Henry VIII in exchange for estates elsewhere. Accommodation was upgraded to suit royal visitors, with suites of luxurious royal chambers. Elizabeth I is known to have visited Westenhanger, but shortly afterwards the house sold into private hands. The buyer was Thomas Smythe, and the Smythes enlarged the house still more until by the middle of the 17th century it was one of the largest and most imposing residences in Kent.

Beside the castle are medieval barns, including the main barn, built with a hammerbeam roof, a style normally associated with very high-status buildings. The barn has four porch doors, high enough to drive a wagon directly inside the building. It is built directly across the East Stour stream.

Unfortunately, the family fell upon hard times, and by 1701 much of the earlier mansion was pulled down, and for the next several centuries the story of Westenhanger was one of neglect and decay. For 98 years the property was owned by its near neighbour, the Folkestone Racecourse, but it is now in private hands once more, and thankfully, the castle has been rescued from the ravages of time, and restored, with help from English Heritage. It is primarily a venue for weddings and corporate events but is open to pre-booked group tours and occasional heritage open days.

More self catering near Westenhanger Castle and Barns >>

More bed and breakfasts near Westenhanger Castle and Barns >>