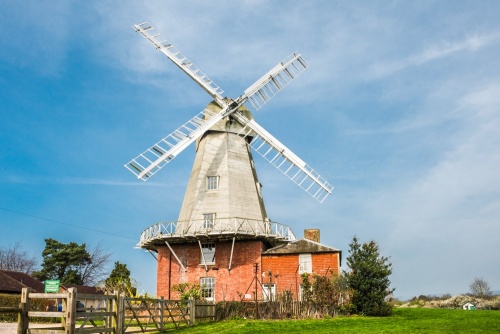 Willesborough Windmill is a 'smock' mill built in 1869, beside a small miller's house. The mill used patent shutters instead of sails to turn four millstones, with auxiliary power provided by a steam engine, later an oil engine, and finally by electricity. Visitors can grind their own flour to take away, and children receive a Miller's Certificate.

The mill was built by a millwright named John Hill to replace an earlier smock mill on the site. The millers were the Cornes family, who worked Willesborough until WWI. Around 1900 the steam engine and accompanying chimney stack were removed, probably because they cost too much to run.

The boiler house and boiler from the steam engine still remain, however. In 1912 a gas-oil engine was installed. This was much more reliable and more economical to operate than the steam engine and enabled the mill to run on days with no wind. It was not until mains electricity came to Willesborough in 1938 that the gas-oil engine was replaced with an electric motor. 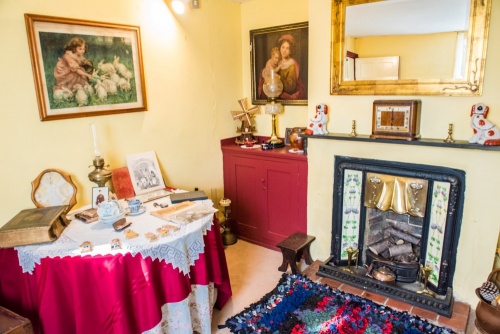 Inside the miller's house

The mill ceased grinding flour in 1938 as it simply could not compete with more efficient and cheaper commercial mills. It continued to produce animal feed from oats, maize, peas and beans, but finally went out of use completely in the 1950s.

After production stopped the building was used for storage, and the fantail installed on the mill at Barham. The mill was purchased by Ashford Borough Council in 1991, restored, and opened to the public as a museum.

The mill stands 4 storeys high, on a 2 storey base of brick. There are 4 millstones powered by the patent sails, and a 5th grinding stone powered by the electric engine. The large brake wheel and windshaft were probably reused from the earlier smock mill. 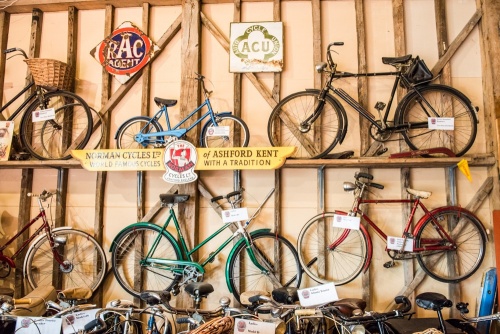 Aside from grinding its own flour using either wind or a gas engine, the mill houses a museum of cycles made by the local Norman Cycles firm. The Norman company made autocycles, bicycles, motorcycles, and mopeds, and the museum showcases several models of bicycles and mopeds. The Norman Cycles Club also has their headquarters at Willesborough.

Norman Cycles was established in Ashford after WWI by brothers Fred and Charles Norman. The original company name was the Kent Plating and Enamelling Company. In the early 1920s the firm began making cycles, but it was not until 1935 that the company was renamed Norman Cycles Limited.

One of their early models was an 'autocycle', essentially a bicycle with the addition of a small engine; the forerunner of today's mopeds. They expanded their motorised cycle line, though they did not make their own motors, preferring to use motors produced by other manufacturers such as Villiers and Sachs. The company's Ashford plant closed in 1961, though Norman cycles and motorbikes were made elsewhere for several more years. The company name finally died in 1963. 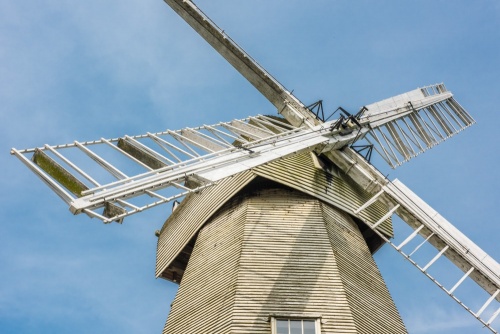 The Windmill is signposted off Hythe Road (the A292), in Willesborough, on the eastern fringe of Ashford. From the M20 take Junction 10. Though the mill is actually at the end of Mill Lane you need to turn into Silver Hill Road, then take the first left into Cornes Close, where you will find a small parking area for visitors to the Windmill. The mill is visible at the top of the field overlooking the parking area, about 5 minutes stroll away.

There is a modern visitor centre behind the windmill and miller's house, where you will find a combination tea shop, visitor centre, and the Norman Cycles Museum. Access to the windmill is by guided tour, led by one of the volunteers who keep the Windmill open.

We had a very enthusiastic and knowledgeable guide, who was very easy to listen to and regaled us with stories of the windmill's past and how the milling process works. We were able to climb up to the top chamber where the huge shaft and gears that transfer power from the sails is housed. To see the massive wooden cogged gears up close was very striking, and we could feel the building move slightly in the wind.

After we explored the windmill and saw how the milling process worked the guide showed us the gas-oil engine that powered the grindstones from 1912. From there she led us through the miller's cottage, which was minuscule by modern standards but probably represented a very good standard of living in the windmill's heyday.

It is remarkable to see the Willesborough Windmill surviving on the edge of such a built-up urban area. Visiting the mill was like turning back the hands of time to a bygone age. 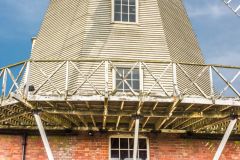 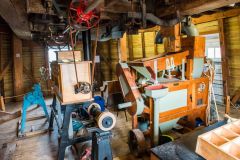 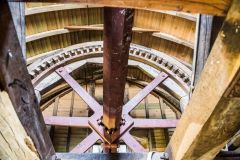 More self catering near Willesborough Windmill >>