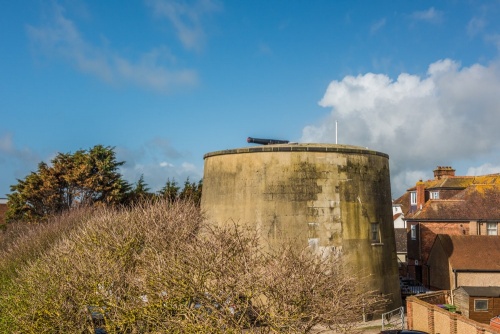 Dymchurch Martello Tower is a 30-foot high artillery tower built during the Napoleonic period as part of a string of defensive fortifications along the south coast. It took half a million bricks to build the tower, which is number 24 of an original 79 towers stretching along the coast of Kent into Sussex. It has now been restored to its original condition.

In 1803 Captain William Ford proposed a plan to erect a series of small artillery towers along the south and east coast of England in an attempt to counter the threat of an invasion by Napoleon. Ford was inspired by the French round tower at Mortella Pont on Corsica, ironically the birthplace of Napoleon himself. In 1804 the plan gained approval from William Pitt's government, and construction began the following year.

The Dymchurch tower was just one of 103 round towers built along the coast, and one of 6 built in Dymchurch itself. The tower design is very simple; it is 2 storeys high, with a basement and a gun platform on the roof. 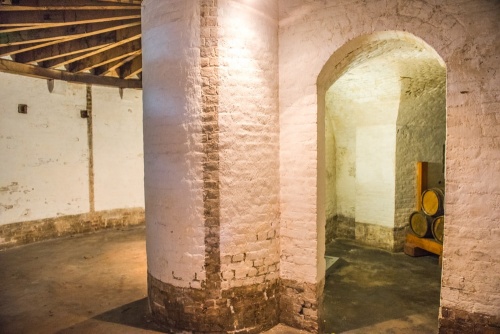 The basement level holds a water tank and food storage, while gunpowder and other supplies are on the ground floor. Quarters for officers and men occupy the first floor. There is a very clever drain system on the roof that feeds rainwater directly into the water storage cistern in the basement.

The gun platform supported a 24-pounder muzzle-loading gun. The gun could be turned a full 360 degrees, using ropes, but to operate the gun took a team of 10-14 men. The gun could fire round shot with a range of up to a mile.

The garrison quarters theoretically could hold up to 24 men, but it would have been incredibly cramped if all 24 were there at once.

The French invasion under Napoleon never materialised, so the effectiveness of the Martello towers was never tested in battle. After the French defeat at Waterloo, many of the towers were used by the Coastguard to control smuggling. 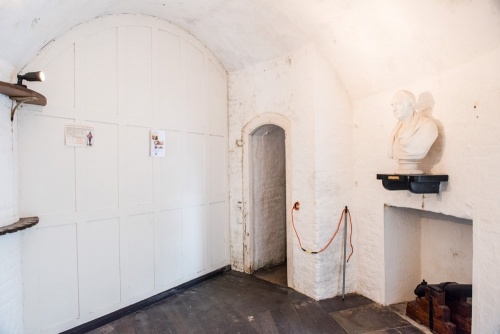 Once that threat, in turn, died down, some were simply allowed to decay, some were sold into private hands.

The Dymchurch Martello Tower is in the care of English Heritage but is actually open to the public by a team of local volunteers acting as a charity. The volunteers keep the Tower open on weekend afternoons from Easter through autumn. Please check the English Heritage website for current times and dates.

There are three levels open to view. A set of stairs leads to an entrance on the first floor, where there is a small chamber with a display on the history of the Tower along with a bust of William Hobson, who built the Tower.

Hobson was a shrewd businessman; he bought all the bricks in the region, effectively giving himself a monopoly and making him the only contractor who could meet the job specification. Not surprisingly, Hobson was given the contract to erect Martello Towers along the entire south-east coast of England. He also built the Old Bailey, Newgate Prison, and East India Docks in London.

From the first floor exhibition you can climb a set of stairs to the roof, where a canon is mounted. You get a very good look at the mechanism used to popint the cannon in any direction, and the views from the roof are wonderful (though it is a bit disconcerting to look down on a busy amusement park beside the Tower).

Back on the first floor you have the option of descending a very steep set of stairs to the vaulted cellar, where munitions were kept. Not everyone will want to climb down the narrow stairs, but if you do you'll get a good idea of the Tower construction.

What makes this Martello Tower so special is that it is closer to its original condition that any other, and visitors can see what it was like when it was occupied by a military garrison. 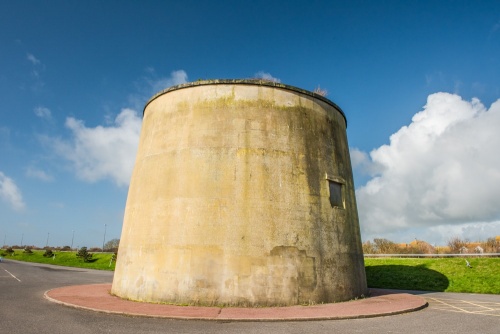 Many of the latter are used as private dwellings today, including tower number 23, just north on the Hythe road. You can see Tower 23 from the roof of number 24. This is odd in itself, for Martello Towrs were not unsually built that close together.

The exterior of Tower 23 can be viewed at any time, but as of this writing, the interior is unfortunately only accessible by appointment. It is easy to visit; it stands in the middle of a large parking area on the western edge of Dymchurch, about 5 minutes walk from Tower 24. 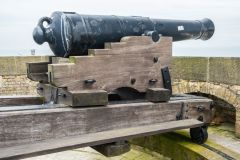 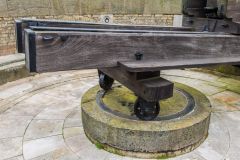 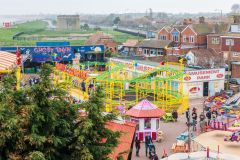 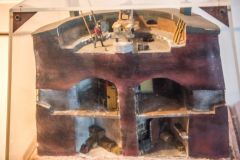 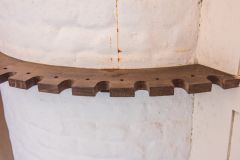 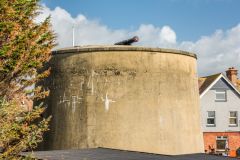