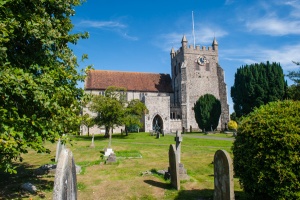 There was a church here in the Saxon period, dedicated to St Gregory. That church was noted in the Domesday Book when Wye was a royal manor. Around 1200 the manor was granted to Battle Abbey, and a second dedication added to St Martin. Then in the middle of the 15th century, the Norman building was completely overhauled by John Kempe, Archbishop of Canterbury and a native of Wye.

Kempe's long career in the church led to him being in turn Bishop of Rochester, Chichester, and London. For 26 years he was Archbishop of York, until he was made a Cardinal and finally, Archbishop of Canterbury. He is buried in Canterbury Cathedral. The Kempe arms of three wheatsheaves can be seen in several locations around the church.

Kempe established a college of priests here to serve the church. After the Reformation, the college served as a grammar school and later became an agricultural college associated with London University. In 1572 the tower was struck by lightning, a fact which probably led to its ultimate collapse in 1686. The collapse of the tower destroyed the east end of the church, including the chancel and both aisles. 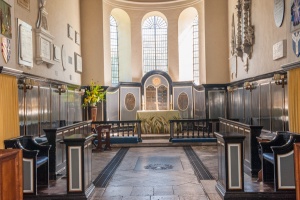 The chancel was rebuilt around 1706, in a rather lovely Stuart style, with pastel colours that contrast with the late medieval nave. It is the contrast between Archbishop Kempe's medieval nave and the Queen Anne neo-classical chancel that give Wye church its unusual charm.

The church guide describes the chancel as 'most unecclesiastical' and I'd have to agree. The decorative scheme of white, blue, and mauve panels would be well suited to an early 18th-century drawing room in a country house.

At the same time, a new tower constructed on the south side of the church. The townsfolk took no chances this time, and gave the tower a huge base, covering the entire width of the old south transept. More destruction followed in World War II when a bomb blew out most of the medieval glass in the church. The large west window, with its stained-glass depiction of Archbishop Kempe, was inserted in the 1950s. 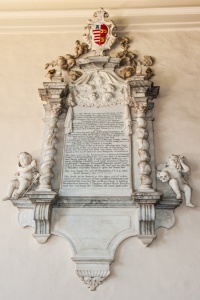 Among the most intriguing memorials in the church is a tablet to Lady Joanna Thornhill in the chancel. Lady Thornhill (1635-1708) was well known for her generosity and established a school for the poor of the parish. She was the great-granddaughter of Sir Richard Grenvile, and widow of Richard Thornhill, a Royalist cavalier.

Widowed at 22, she became a lady-in-waiting to Catherine of Braganza, wife of Charles II. When her brother was created Earl of Bath she gained the title 'Lady' and lived at Olantigh until her death. She left money in her will to provide schooling for those poor children not able to attend Kempe's college. Lady Thornhill's new school eventually became Wye's primary school.

In the floor of the nave are grave slabs to members of the Brett family, spanning the years 1599-1770, but one of the most impressive features inside the church are funeral hatchments to the Sawbridge family of Olantigh. The hatchments begin in 1715 and the last dates from 1913.

The hatchments depict the Sawbridge arms as granted by the College of arms in 1714; 'Or, two bars azure, each charged with a barrulet dauncettee argent, a chief indented of the second.' The obscure terminology of heraldry describes what is essentially a visual pun; a series of jagged teeth on a bridge, standing for the family name Sawbridge. 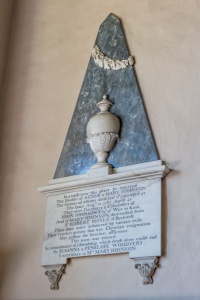 Also of note is a late 18th-century wall monument to Agnes and Mary Johnson, with an inscription reading:

'Their days were imbittered [sic] by various evils. Their conduct proves that true Christian resignation may palliate the heaviest afflictions.'

One final feature is a set of memorial brasses to members of the Palmer family. These brasses are set into a modern panel immediately beside the south door. They commemorate Alice Palmer (d. 1467) with her two husbands Thomas Palmer and John Andrew, her 8 daughters and 3 sons.

Both husbands are dressed as merchants, with long tunics and short-cropped hair. Alice Palmer wears a distinctive late 15th-century horned headdress. The rather amusing inscription below the brasses translates as:

John Andrew the just and Thomas Palmer the good looking,
Going out into the world, were laid in hard marble,
and their wife Alice suffered a similar fate.
It is requested that you will not forget that they may live in Christ.

One final note; if you use a postcode for your satnav, I suggest using TN25 5BP, instead of the official postcode, which led us down a nearby side street, and we had to backtrack and ask a local where the church was! It's actually very easy to find; on the High Street across from the village shop. 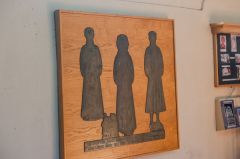 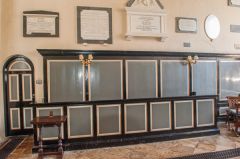 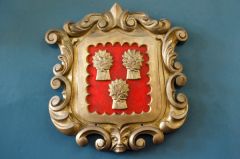 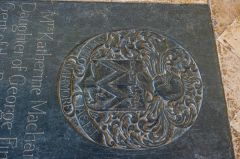 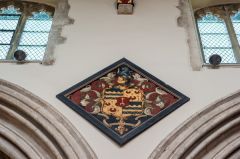 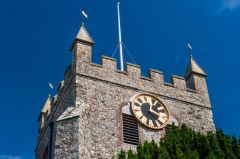 More self catering near Wye Church