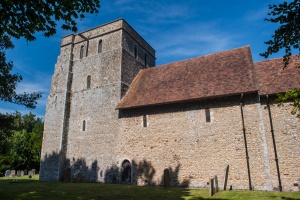 The small rural village of Brook is accessed via narrow, winding lanes, and the setting of the ancient church of St Mary in its leafy churchyard is an idyllic one, in perfect keeping with its peaceful surroundings. St Mary's is one of the most complete Norman churches in England, dating almost entirely to the late 11th century.

Rather than being an independent parish church, St Mary's was owned from the start by Canterbury Cathedral, which perhaps explains how it has remained so unaltered by the passage of time.

The interior architecture is simple, even rough. But that simple interior was embellished in the 13th century by a series of wall paintings which rank among the finest in England. Though the worn nave paintings are interesting, especially a large figure of St Christopher over the north door, it is in the chancel that Brook shines.

Most of the east wall, and large sections of the north and south chancel walls are covered with a pattern of roundels painted with Biblical scenes. The east wall paintings are in a striking monochrome scheme, alternately black on white and white on black.

The major themes are the Resurrection, Nativity, and the Passion. On the south wall are red on white and white on red depictions of scenes from the life of a saint. 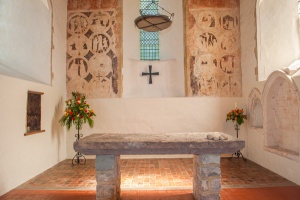 There is a further painting of Christ in Majesty in the tower, in what was once a private chapel. This is the earliest painting in the church, dating to the 12th century, but it can only be viewed by previous appointment, as the tower is normally kept locked.

There are 14th-century floor tiles in the chancel floor, in front of the stone altar slab. The altar was buried in the churchyard during the Reformation and only discovered again in 1966. Beside the altar stone are a 14th-century piscina and single-seat sedilia of the same period. 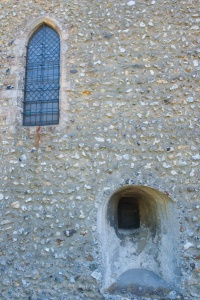 The most striking feature of the church exterior is the sturdy west tower. This rises in three stages, the second of which has traditionally ben known as the 'Priest's Room', used as accommodation for priests from Canterbury coming to administer the manor of Brook. The west tower door has reused pieces of a Norman frieze set into the tympanum.

One other unusual feature is worth mentioning; in the north wall of the chancel is a small almond-shaped opening, protected by deep splays. This is probably the remains of a medieval squint, or hagioscope, allowing an anchorite to view the high altar.

There are no apparent traces of an anchorite cell attached to the chancel, so we can only presume it was destroyed during the Reformation.

I found Brook church a delight to visit. The combination of the setting, the beautifully complete Norman building, and the wonderful wall paintings make it a memorable place to see. 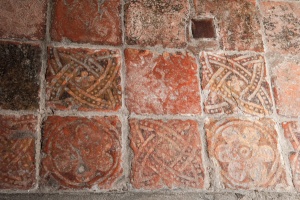 14th-century floor tiles in the chancel 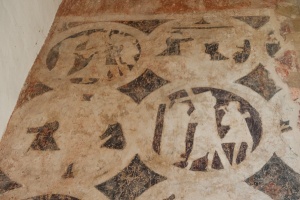 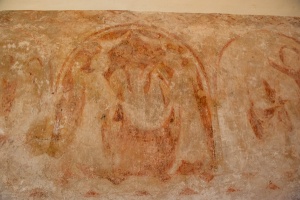 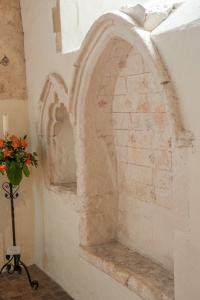 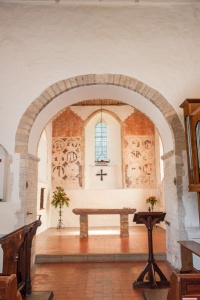 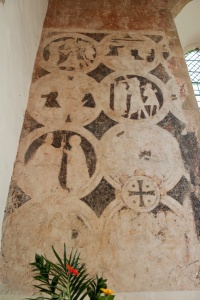 More self catering near Brook

More bed and breakfasts near Brook