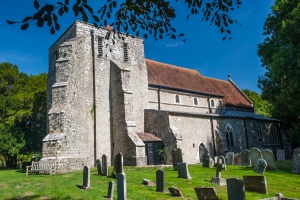 Our first written record of a church Brabourne comes from 1070, shortly after Lanfranc became Archbishop of Canterbury. That first church was replaced by the Norman building we can see today in 1144. The most immediately obvious external feature is the very squat and sturdy west tower, heavily braced with buttresses rising in seven stages on the diagonal and five stages in the centre of the south tower wall.

The original tower was much higher, but around 1700 it began to collapse, so the upper stages were taken down and the buttresses added to prevent a total collapse. The tower stair is built of oak timbers, 31 feet long, with a forked branch to support it and another oak timber as the base. Each tread is triangular, fixed by an oak peg.

Set on the nave walls are a pair of lead panels inscribed with the initials TW and TT, for Thomas Thompson and Thomas Webb, churchwardens in 1700, commemorated for their role in rebuilding the medieval tower. Also in the nave is a coat of arms to George II, over the south door. 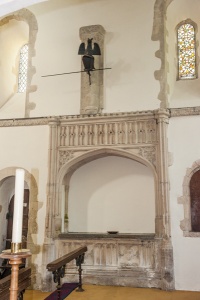 The east end of St Mary's is a delight. The chancel arch is 12th century, with carved capitals and string-courses. On the south side are a carved dragon and a human head with long hair. The easternmost arch of the south wall is decorated with laughing faces of monks.

Set into the north wall of the chancel is an elaborately carved 15th-century tomb of John Scott (d. 1485), Lord Warden of the Cinque Ports and Comptroller of the Household to Edward IV. The tomb recess is set beneath a beautifully decorated canopy and has a lower section showing the arms of Scott and Beaufitz.

It seems likely that the tomb once had an effigy of Sir John or memorial brasses, but if so, they are gone now. The altar, topped with Bethersden marble, dates to about 1600 and was originally a table tomb for Reginald Scott (d. 1599), author of Discovery of Witchcraft, a popular treatise on the matter of witches. The altar is inscribed with versions of the Scott family arms, the earliest from 1290 and the last from 1562. 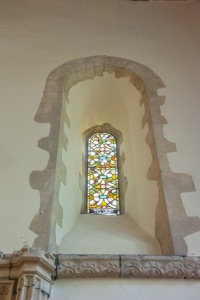 On opposite sides of the chancel walls are mounted helmets of Sir William Scott (d. 1433, south wall) and Sir Thomas Scott (d. 1594, north wall). Sir Thomas has a place in British legend, having raised 4,000 men in 24 hours when the Spanish Armada neared the coast of Kent in 1585. Two arched niches on the south wall originally contained more Scott tombs, one probably that of Sir William Scott, Lord Chief Justice and Knight Marshall of England, who died in 1350.

High in the north wall of the chancel, above the altar, is a small, deeply splayed Norman window. At first glance it is unremarkable; a typical example of a round-headed Norman window. But set within the window is stained glass from about the year 1200, and what is even more remarkable is that the glass is in exactly the same place in which it was placed over 800 years ago.

This makes the Brabourne window the oldest in the country with its original glass intact, in its original setting, or as the church guide rather colourfully puts it, "It is believed that this is the oldest complete Norman window through which light falls anywhere in England".

By contrast, the lovely east window is filled with stained glass by the Ward and Hughes company and won first prize at the prestigious Paris Exhibition of 1878. 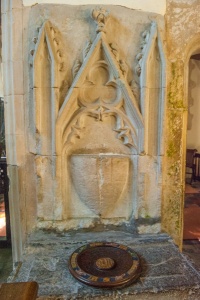 One feature above all others sets Brabourne church apart, and it can be found immediately beside the arch leading to the Scott chapel from the chancel. This is a small, richly decorated niche, topped by a slab of Bethersden marble and carved with a cross within a circle.

The elder Balliol founded Balliol College at Oxford University, and after his death, his grieving wife bore his heart around her neck in a casket of ivory and silver, day and night.

The heart was buried with her at Sweetheart Abbey, near Dumfries, but after the younger Balliol was defeated by Edward I the abbey was despoiled. Balliol, whose descendants bore the name of Scott, resided for a time at Brabourne before his eventual exile by Edward.

He was by conviction a Cluniac, and since Brabourne was at that time held by the Cluniac monks of Monks Horton, it seems logical that he brought his father's embalmed heart to Brabourne and set in within the shrine.

The heart shrine is empty now, and no one knows what became of the heart. Perhaps it was lost in the Reformation, but we don't really know, and that just adds to the intrigue. 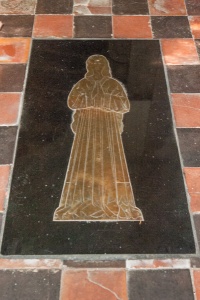 Originally known as the Holy Trinity Chapel, the Scott Chapel dates to 1420 and is full to bursting with memorials to members of the Scott family. The earliest memorial, however, predates the chapel. It is a small 13th-century coffin lid set into the centre of the chapel floor, between an array of Scott family brasses.

Some of the brasses have been strikingly reset in black marble, among them is one to Sir William Scott, who founded the chapel and served as sword-bearer to Henry V, and a later Sir William Scott who was Constable of Dover Castle, Lord Warden of the Cinque Ports, and attended Henry VIII at the Field of the Cloth of Gold.

On the north side of the chapel is a brass to Isabel, Lady Clifton, wife of the first Sir William. This brass is unusual in that Lady Clifton is shown without a head-dress. Another brass shows Elizabeth Powynynges, the daughter of Sir John Scott, whose tomb niche is in the chancel.

There is also a rather sad memorial is to Francis Talbot Scott, who died of melancholy (depression) after he was forced to sell off the family estates.

I've visited quite a few historic churches in Kent, and I must say I've seldom enjoyed one as much as I enjoyed St Mary the Blessed Virgin in the village of Brabourne. In his 'Betjeman's Best British Churches' author John Betjeman gave this delightful church his top rating and I can see why. 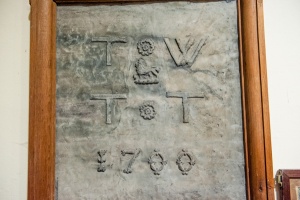 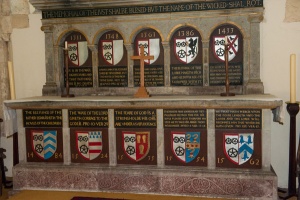 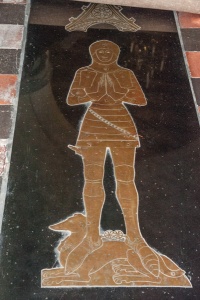 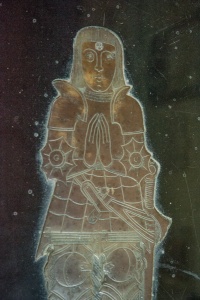 Memorial brass in the
Scott chapel 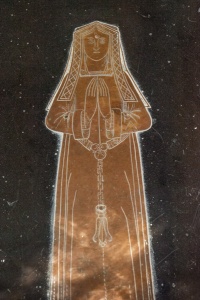 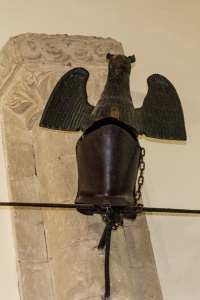 More self catering near Brabourne

More bed and breakfasts near Brabourne