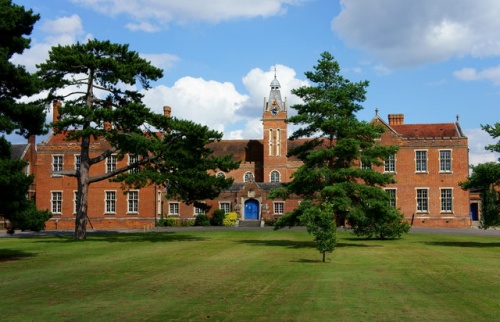 Carew Manor (c) Peter Trimming
Carew Manor is a superb Tudor manor now used as a school. Unfortunately, it is no longer open to visitors, but a public footpath passes through the grounds and directly in front of the house.

Carew Manor was originally called Beddington Place and was home to the powerful Carew family from 1351-1859. The Carews came to London in the 14th century but really rose to social prominence in the Tudor period.

Richard Carew served as a royal official in Calais, but it was really his son Nicholas who drew the attention of the Tudor court for his prowess at tournaments.

Nicholas became a firm favourite of Henry VIII, and his father was emboldened by his son's rising star to rebuild the family home in Beddington and install the hammer-beam roof which still graces the great hall.

The Carew Rise and Fall

In 1538 Henry VIII's chief minister, Thomas Cromwell, decided that Nicholas Carew had become too popular, and had Carew arrested for treason and executed. His estates, including Beddington, were seized by the crown. Mary I restored the Carew estates to Nicholas's son Francis, who wisely kept out of court politics.

Instead, Francis Carew devoted himself to developing the garden at Beddington, importing oranges, pomegranates, myrtle, and lemons from the continent. The gardens at Beddington became known as one of the most important in Elizabethan England.

After the family left in 1859 the Hall became a female orphan asylum, and later The Royal Female Orphanage. It is now a special education school.

The best feature at Carew Manor is the Great Hall, almost unchanged since it was built around 1500. The hall boasts a magnificent hammer-beam roof.

The octagonal brick dovecote was built around 1715 for Sir Nicholas Carew. It was designed with 1360 nesting boxes for pigeons, who entered through a wooden turret at the roof peak. In the centre of the dovecote is a potence, or ladder which rotates around a central post, enabling keepers to collect pigeons or eggs for the Carew family dinner.

The unusually large size of the dovecote is a testament to the wealth and importance of the Carew family - and also a reminder of how important pigeons were in providing food. In fact, the dovecote is so large that historians speculate whether the Carews really needed all that space for themselves, or whether they raised pigeons for sale as well.

Visiting
NOTE: The school is now an academy and is no longer open for visits in the summer months.