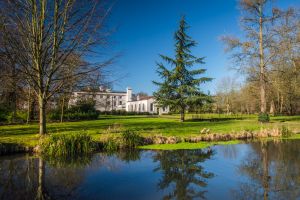 Morden Hall Park is 125 acres of parkland in south London with the River Wandle running through it. The park is criss-crossed with walks, and footbridges over the river. The park takes in meadows, wetlands, and waterways. In addition, there is a very large rose garden, at its best from May-September.
History
Morden Hall estate was once an area of marshland owned by the monks of Westminster Abbey. Henry VIII seized the estates at the Dissolution of the Monasteries and sold the land to Edward Whitchurch, a staunch Protestant and publisher of the Bible in English. Whitchurch built a manor here but was forced to sell when the Catholic Mary I came to the throne.

Morden was purchased by the Garth family, who used it as a country retreat from the pressures of life in the centre of London.

Around 1770 Richard Garth built an elegant new Georgian Hall, but when Richard died his daughters decided to move back to the delights of the city and rented the Morden estate to tenants. The house was used as a school for young gentlemen from 1840. In the 1870s the Garth family sold Morden to a tobacco company owned by the Hatfeild family, and in the grounds, you can still see mills where tobacco was ground to make fashionable snuff. 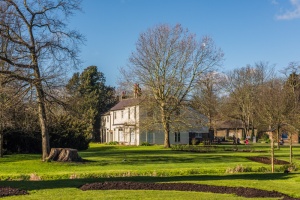 Morden Cottage
The Hatfeilds added the stableyards and a rose garden to the grounds. Gilliat Hatfeild was an eccentric man, who liked his estate to be run with precision, so he installed the clock you can see in the stableyard and had it chime every 15 minutes so that all the estate workers could keep affairs running with precision.

The house was used as a hospital in WWI, and given to the National Trust by the Hatfeild family in 1941. The final owner, Gilliat Edward Hatfeild, lived in Morden Cottage, also part of the parkland. The garden surrounding the Cottage contains one of the oldest yews in England and a number of unusual ornamental trees. There are wetlands areas, riverside walks beside the Wandle, and you can see a restored 19th-century waterwheel. A trail links Morden with the historic village of Carshalton, following the Wandle Trail.

Visiting Morden Hall Park
There is parking near the main entrance, near the centre of Morden. Morden tube station is a 5-minute walk from the park entrance, and Tramlink Light Rail brings visits to the northern part of the park. Alight at Phipps Bridge, Belgrave Walk, or Morden Road stations.

We came to Morden on a sunny morning in March, opting to take the Northern Line tube to Morden station. Access to the park was pretty straightforward; we just crossed London Road and walked straight down Aberconwy Road to the end, where it meets Morden Hall Road. The pedestrian entrance to the park was directly across the road, with access to the National Trust's garden centre and cafe. 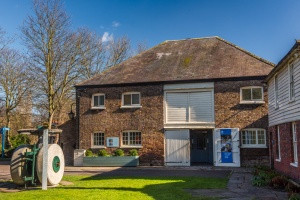 The restored snuff mill
Though the Park is owned by the Trust, it is open to the public without charge. The Trust maintains the old snuff mill near the entrance, with a fascinating display on how snuff was made and how fashionable men 'took snuff'. There was a very precise social process for taking snuff, with very strict social rules on which hand to use, and how to share the snuff amongst a group. It really is an interesting glimpse into the fashionable world of the 18th century.

Behind the mill is a restored water wheel, and in front of the building are a set of millstones used for crushing tobacco to make snuff.

A short stroll from the snuff mill is Morden Cottage, now the home of a preschool and not usually open to the public. Near the Cottage are a rose garden (unfortunately out of bloom when we visited) and a network of trails leading through open parkland.

You can follow the old main drive to Morden Hall, which is flanked by an avenue of tall trees as it curves in a wide arc before heading towards the Hall. The Hall itself is not open to the public, but several whitewashed iron footbridges installed by the Hatfeild family are dotted throughout the parkland.

Morden Hall Park is a beautiful green space, full of history, and well worth a visit if you want a break from the bustle of central London. 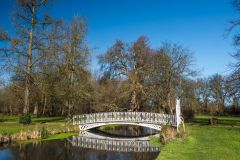 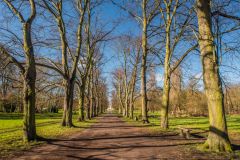 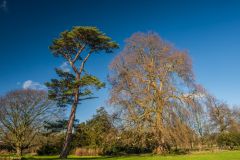