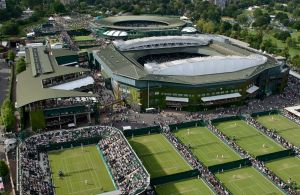 Wimbledon Lawn Tennis Museum
The Lawn Tennis Museum is located in the grounds used by the annual Wimbledon tennis tournament, probably the most prestigious event in tennis. The museum houses the largest and most complete collection of tennis memorabilia, including historic displays stretching all the way back to 1555.

Visitors can also enjoy behind the scenes tours of the grounds, providing access to areas that are seldom seen by the public. Exhibits include clothing worn by current and previous champions, trophies, and historic photographs.

See the trophies awarded to the championship winners each year, and see film highlights of great championship moments. Historic exhibits include items from the very first Championship, held in 1877. There is a large collection of outfits worn by past champions, including 2013 men's winner Andy Murray.

The museum does not have exhibitions that focussed on different eras but rather a collection of artefacts, some of which date back to the time of Queen Victoria. The displays usually rotate artefacts from different decades dating from late 19th century through 20th century.

Aside from the memorabilia, the museum includes a 200 seat Cinema and a special Gallery. A behind-the-scenes guided tour takes you to Centre Court and No. 1 Court, Picnic Terraces, private player's facilities in the Millennium Building, and the Press Interview Room.

This special collection of books, magazines, videos and DVDs relating to the history of the Wimbledon tournament can be viewed by prior arrangement.

Note: You can get Free Entry to Wimbledon Lawn Tennis Museum with the London Pass