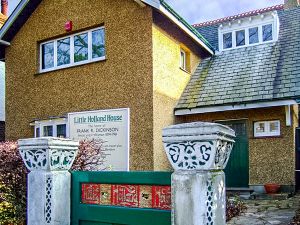 Little Holland House
Little Holland House is an Arts and Crafts style house built in 1902 by Frank Dickinson. Dickinson (1874-1961), was an artist and designer who was inspired by the writings of John Ruskin and William Morris to create a house filled with handcrafted art in traditional styles and materials.

The interior features paintings, furniture, metalwork, friezes, and materials all created by Dickinson. The style is best described as a blend of Arts and Crafts, Glasgow School, and innovative Art Nouveau design.

Not only did Dickinson design the house, he built it by hand. This was perhaps partly because of the philosophy of Ruskin and Morris favoured hand-crafted work by artisans, but equally, because Dickinson lacked the money to hire someone to build it for him! Dickinson drew his inspiration by studying trade journals and built the house and its furniture with the help of his 2 brothers and a hired workman.

Dickinson lived at Little Holland House until his death in 1961. The house was restored by the local council in 1972 and opened as a museum 2 years later. It has been listed Grade II* for its heritage value.

The 'other' Little Holland House

As a side-note, there was another Little Holland House in Greater London. The original was in Kensington and served as the dower house for Holland House. Financial problems forced the 3rd Earl of Ilmington to sell the house and it was torn down in 1875 to make way for Melbury Road.

The easiest access by public transport is by rail, to Carshalton Beeches station, a 3-minute walk away. Road access is via the B278 but be aware that there is no off-street parking available.