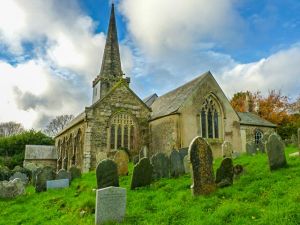 North Huish, St Mary's Church
On the southern fringe of Dartmoor, North Huish church is a mainly 15th-century building in Decorated style. Though the interior was rebuilt during the Victorian period, the west tower and spire are essentially unaltered from their medieval state.

The interior also features Victorian fittings, including a lovely altar screen, and many 19th-century wall tablets. North Huish church was consecrated in 1336, and the original altar slab can still be seen.

The font bears the date of 1662, though it may actually be much older. This anomaly is explained by the fact that fonts were often removed from churches during the Commonwealth period, only to be returned at the Restoration in 1880.

Often the date that the font was returned was inscribed on the font, thus giving a much newer indication of the age of the font than is actually the case.

North Huish is in the care of the Churches Conservation Trust and is no longer used for regular worship.