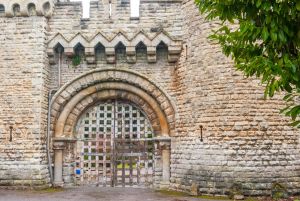 Devizes Castle
Devizes Castle is a Victorian castellated mansion standing on the site of an 11th-century Norman motte and bailey castle. A part of the castle mound may have formed part of an Iron Age fortress. King Stephen besieged the castle, as did Oliver Cromwell, and King John imprisoned his queen here.

In 1080 Osmund, Bishop of Salisbury built a timber palisade on a mound atop a promontory at the western edge of the Marlborough Downs. The castle was built at a point where 3 parishes joined and was called the 'Castrum ad divisas', or 'castle at the boundaries'. This was later shortened and evolved into the modern spelling of Devizes.

Bishop Osmund's castle was little more than a wooden tower surrounded by an outer bailey, defended by a ditch, with a timber palisade atop the ditch and a drawbridge providing the only access to the bailey interior. In 1106 Robert of Normandy was imprisoned at Devizes by his brother, Henry I. He remained a prisoner here for 20 years before he was transferred to Cardiff where he died.

In 1113 the timber fortifications burned down and were replaced in stone by Roger le Poer, the new Bishop of Salisbury. Contemporary records suggest that it was one of the most impressive castles of the age, an almost impregnable fortress.

The castle was at the heart of 12th-century civil war as rival claimants Queen Matilda and King Stephen vied for the throne, and Devizes was taken and retaken several times. Matilda tried to hold Devizes Castle against King Stephen's army but when he threatened to kill her son she surrendered the castle to him.

Stephen left a garrison to hold the castle and marched after Matilda's army. That is where a Flemish adventurer named Robert Fitzhugh stepped in. He led his men in a daring night assault, using leather ladders to avoid arousing the sleeping garrison.

The castle was captured easily, but when Matilda's soldiers arrived Fitzhugh refused to hand it over to them. He was eventually captured, and when his men refused to open the castle gates to save his life, he was hanged before the castle walls. 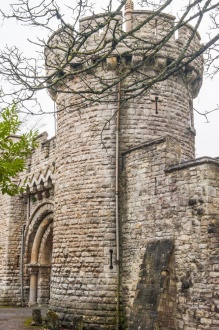 King Stephen avoided further trouble for a time by paying the remaining mercenaries to depart. Stephen sent his son-in-law, Count Hervey of Brittany, to hold the castle, but then the townsfolk themselves besieged it and forced Hervey to hand the fortress over to Queen Matilda. The Queen held Devizes for the rest of the Civil War, and her son Henry used the castle as his military base in the west of England.

Throughout the Middle Ages, the town of Devizes grew, and the streets followed the outline of the castle defences.

During the Civil War, the castle was besieged by Parliamentary forces several times and was finally taken by Cromwell in person. Parliament ordered the castle to be slighted, and this was done in 1648. Stone was taken away to be used for other local building work, and all that remains today is the mound with visible foundations.

In 1842 the Leach family built a Gothic Revival fantasy castle on the site. This was designed by Henry Goodridge of Bath and incorporated the remains of a 17th-century windmill. The house was extended in the 1860s, with funds gained from a successful venture in building a lunatic asylum. The main feature is a large circular tower, decorated with fanciful machicolations and parapets. The castle is reached through an impressive entrance in the form of a Norman gatehouse.

At present, the castle is used as a private residence, and there is no public access. However, it is extremely easy to see the castle towers from several locations around the town and to approach the mock-medieval gatehouse from St Johns Street.

More self catering near Devizes Castle >> 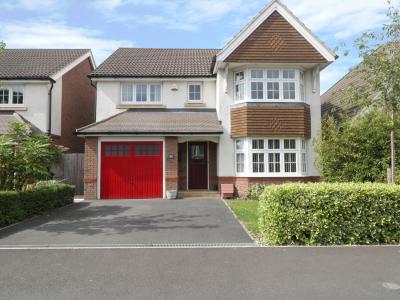 This delightful cottage is in the village of Northfields in Wiltshire, and can sleep six people in three bedrooms.
Sleeps 6