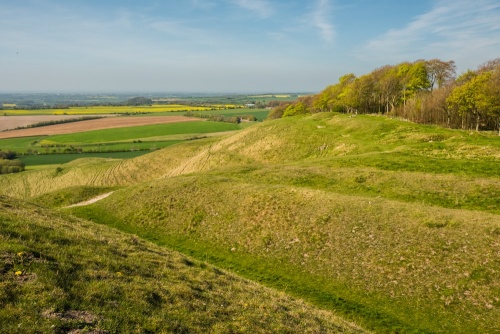 Oldbury Castle (sometimes known as Oldberry Castle) is an Iron Age hillfort occupying the top of Cherhill Down, just east of Calne, Wiltshire. The hillfort is bivallate, meaning it is defended by a double ditch and bank, except on the north-west side where the steep scrap acts as an additional defence for a single bank and ditch.

The fortifications enclose an area of 22 acres (9 hectares) and are built across part of an earlier Bronze Age site. The layout is irregular, following the contours of the hilltop site. The interior of the site is not flat; indeed, it varies in height by as much as 23 metres. This means that there is no point within the fort where you can actually see the full extent of the earthwork ramparts. 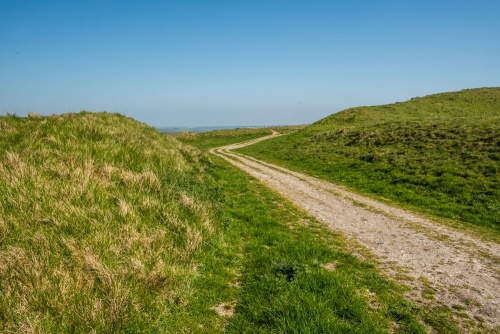 The most interesting (and very obvious) feature is a large entrance in the easter earthworks. You can see how the gap in the outer bank is offset from the opening in the inner bank so that anyone coming through the entrance has to change direction.

The earthworks extend into the fort at the entrance, making for a long, narrow opening through which intruders had to pass to gain access to the interior of the fort. There are no obvious guard chambers built into these entrance earthworks.

Outside the earthworks is a possible Romano-British temple. Excavations have revealed that the site was reoccupied after the departure of the Romans in the 5th century. Over 150 storage pits were found, and evidence of roundhouses, some of which overlapped each other.

Late Bronze Age pottery fragments were found, as well as later Roman pottery and coins. Perhaps the most intriguing find was a Saxon brooch dating from the 5th-7th century.

In the eastern corner of the Iron Age earthworks stands the Lansdowne Monument, a striking slender obelisk built in 1845 by the 3rd Marquis of Lansdowne in honour of his ancestor Sir William Petty. The Monument is 125 feet high (38m) and was designed by Sir Charles Barry, the architect responsible for rebuilding the Palace of Westminster. 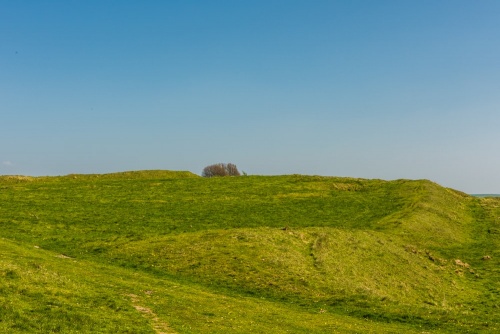 The northern edge of the hillfort ends at the steep scarp of the Cherhill Down. Partway down the slope of the hill is the Cherhill White Horse, a chalk outline of a horse built in 1780 by Dr Christopher Allsop of Calne.

At the western end of the hillfort, a single block of sarsen stone was found lying in the ditch. It isn't clear whether this stone was brought to this site by the hillfort's builders. The hillfort shows evidence of considerable quarrying activity, though that may have been done during construction of the Bath turnpike road in the 18th and 19th centuries. 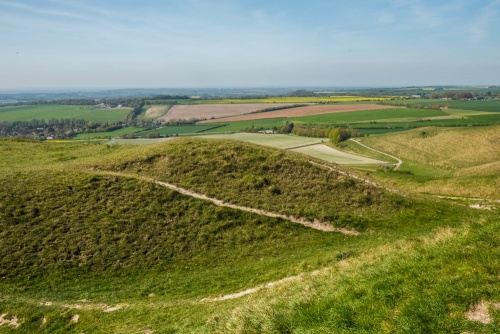 Oldbury Castle is very easy to find. It is on top of Cherhill Down, easily accessed by several footpaths from the A4 on the eastern edge of Cherhill village. There are several large lay-bys on the A4, on both sides of the road. There are information panels on the north side of the roadway. From there, an obvious trail leads up the slope of Cherhill Down, allowing excellent views of the White Horse and Lansdowne Monument.

The hilltop is protected by a fence that protects the National Trust-owned land. Just follow the very clear path past the Lansdown Monument and you will find yourself inside the earthworks. From the beginning of the footpath on the A4 it will take no more than 10 minutes to reach the hillfort.

More self catering near Oldbury Castle