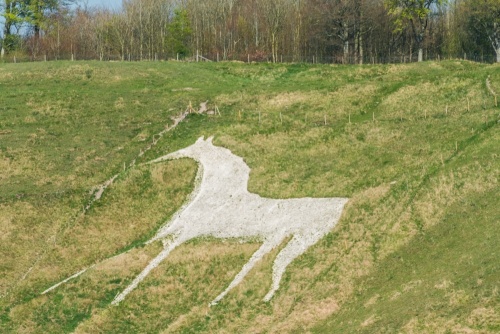 The horse outline was cut into the chalk in 1780 under the direction of Dr Christopher Allsop (or Allsup), a physician from Calne. A local tradition says that Allsop directed the operation by shouting instructions through a large speaking trumpet from a position on the Calne road at the base of the Down (where the A4 now runs).

Allsop could afford to indulge his fancies; as physician to the wealthy Lansdowne family of Bowood, he was very well to do by the standards of the time.

Through his association with the Lansdowne family, he would have come into contact with the painter George Stubbs, who was a family friend. Stubbs was famous for his portraits of racehorses, and it is very possible that the Cherhill White Horse was modelled after the style of equine portrait favoured by Stubbs. 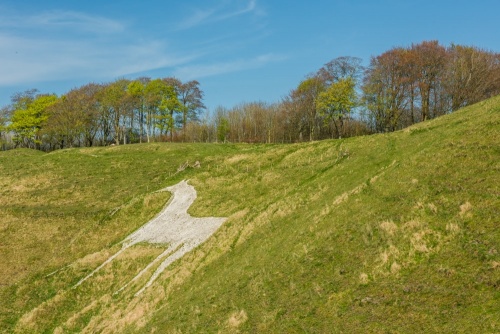 The view from the slope of Cherhill Down

The white horse is 131 feet high and 142 feet long (40m x 43m). It is one of 8 chalk figures in Wilshire that form the White Horse Trail, a circular walk of 90 miles linking some of the most fascinating historical landscapes in England. The Cherhill White Horse is the second-oldest chalk figure in Wiltshire after Westbury, which was cut two years earlier. It seems highly likely that Dr Alsop was inspired by the Westbury White Horse.

During World War Two the horse was covered over with turf so that the white chalk did not act as a landmark for enemy aircraft.

The white horse is now cared for by Cherhill Parish Council. The most recent restoration by the Council took place in 2002 when the figure was returned as close as possible to its original condition. The restoration took a staggering 150 tons of carefully graded chalk, which was placed inside an outline made with 900 metres of timber revetment held in place by 1500 wooden pegs. 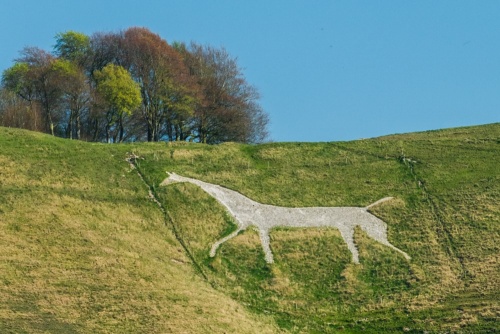 The view from the Cherhill Down footpath

The restoration was carried out by a team of paid and volunteer workers and took over 1000 manhours to complete. It is sobering to think that after all that work the restoration is only expected to last for 20 years. The Council also do annual maintenance on the horse, weeding and re-chalking to keep it looking fresh.

The White Horse stands directly below the crest of Cherhill Down. At the top of the hill is Oldbury Castle, an Iron Age hillfort. Within the hillfort's earthworks stands the Lansdowne Monument, a stone obelisk erected in 1845 by the 3rd Marquis of Lansdowne in honour of his ancestor, Sir William Petty. 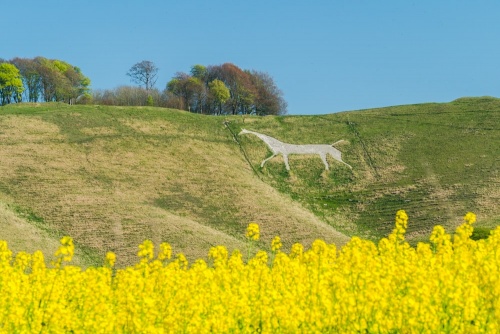 The Cherhill White Horse is exceptionally easy to find. It is easily visible from the A4 on the eastern edge of Cherhill village. You don't even need to get out of your vehicle to get a reasonable view of the hill figure, but it is a very easy climb to see it close-up. There are several lay-bys on the A4, on both sides of the road.

There is a signposted trail with information panels on the south side of the road just at the village boundary. From there just follow the well-defined footpath directly up the hillside.

For much of the way, you will have very good views of the white horse and of the Lansdowne Monument, which occupies the highest point on Cherhill Down. While you can get a very good view from the footpath, you can, with some effort, scramble down the slope of the Down to get a closer look.