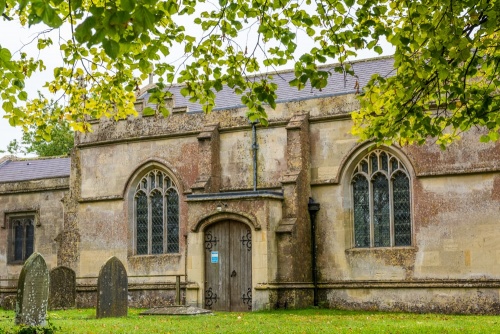 Stanton St Bernard is a pretty village on the northern bank of the Kennet and Avon Canal between Pewsey and Devizes. On the western edge of the village, near the village hall, stands the medieval parish church of All Saints.

The church dates to at least 1267 when it was owned by Wilton Abbey, but a Norman font in the nave suggests an earlier church on the site. The west tower was added in the 15th century.

By 1831 the medieval building was in poor condition so Rev GJ. Majendie had the entire building pulled down, with the exception of the tower. The rebuilt church was poorly constructed and had to be rebuilt again in 1859. 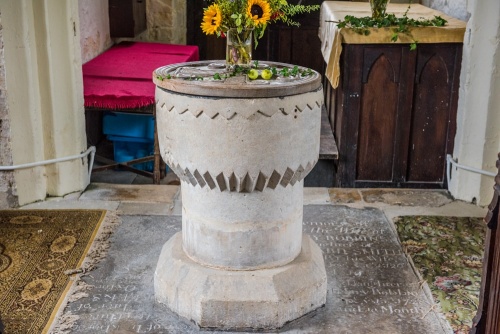 The furnishings are all Victorian, except for the font, which probably dates to the 12th century. Highlights include the chancel rails with fleur-de-lys caps and candelabra ends. The rails were a gift of Henry Broomham. The pews are early 19th-century work.

By far the most eye-catching feature is a colourful wall painting in Arts and Crafts style over the chancel arch. The painting depicts Christ in Majesty, surrounded by angels. It is based on the visions of St John in the Book of Revelation.

The wall painting was executed around 1900 by Maude Berry. The faces of the angels may be those of a prominent local family. One of the angels on the north side of the arch is a self-portrait of the artist. The scene was painted on linen in Berry's studio, then fixed in place with wooden battens. Maude Berry also painted a mural on the east wall above the altar, but this has not survived. 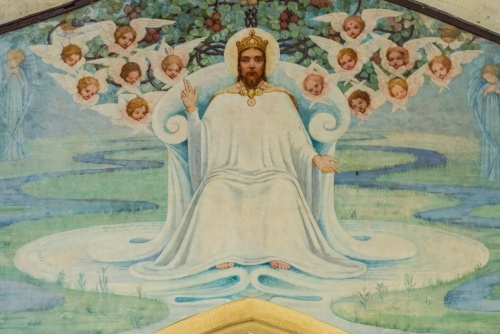 Maude Berry was born in Canada and came to London with her family. She studied at the Slade School of Art in London and became a portrait artist and woodcarver. She became friends with the Tayler family of Stanton. James Tayler and his wife Winifred, along with her brother Richard Elling, commissioned her to paint a mural in honour of their mothers Caroline Tayler and Margaret Elling. You can find another of Maude Berry's murals at the church in Lea, near Ross-on-Wye.

There are several interesting wall tablets. One commemorates William Tayler (d 1826) and his wife Anne (d 1828), while another is to their son Henry, who died in 1846. Set into the nave floor is a grave slab commemorating Hugh Livingstone (d 1746) and his wife Lettice (d 1757). Also set into the floor is an intriguing diamond-shaped marble slab inscribed simply 'BS, Obit 13th October, Anno 1736, AEtat 72'.

The most interesting memorial, however, is tucked away under the tower. It is a black board painted with faded white letters, commemorating John Booth, who died in 1635. The epitaph - complete with inventive spelling - reads as follows, 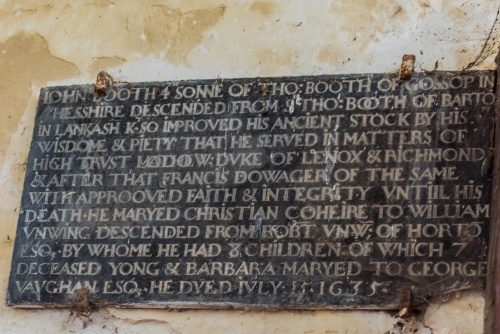 'John Booth 4th sonne of Tho. Booth of Gossopin Chesshire descended from Sir Tho. Booth of Barton in Lankash Kt. So improved his ancient stock by his wisdom & piety that he served in matters of high trust Ludow Duke of Lenox & Richmond & after that Francis Dowager of the same. with approoved fath & integrity until his death. He maryed Christian coheire to William Unwing descended from Robt Unw. of Horton Esq. by whome he had 8 children of which 7 deceased yong & Barbara maryd to George Vaughan Esq. He died July 15, 1635.'

On the north wall of the nave is a fascinating war memorial in the form of a triptych with hinged doors. The outer face of the doors reads 'To the memory of the brave boys of this village who gave their lives for their country'. 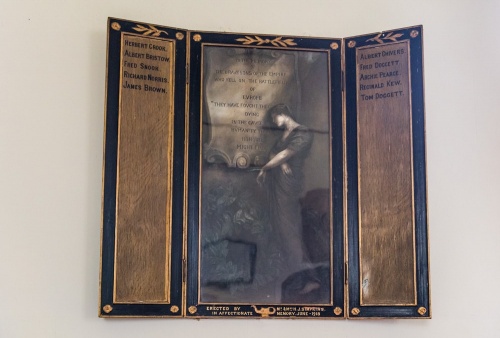 If you open the doors you see a list of 10 names flanking a central panel with a Pre-Raphaelite figure of a woman grieving before a wall plaque. On the opposite wall is a more typical war memorial plaque with the names of 21 men of the parish who served in WWI, while by the pulpit is yet another memorial to eight men who died in WWI and another two who fell in WWII.

All Saints Church is a simple country church in an idyllic village setting. The church was open when we visited.

Stanton St Bernard is on a minor road immediately north of the Kennet and Avon Canal, between Alton Barnes and Allington. It is roughly four miles west of Pewsey. The church is near the western edge of the village, next to the village hall. 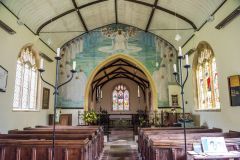 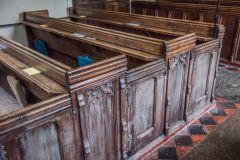 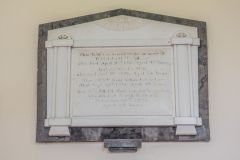 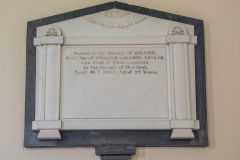 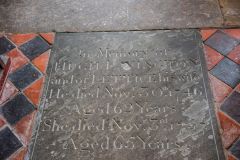 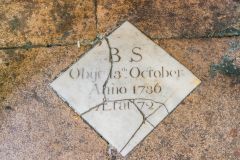 More self catering near Stanton St Bernard, All Saints Church