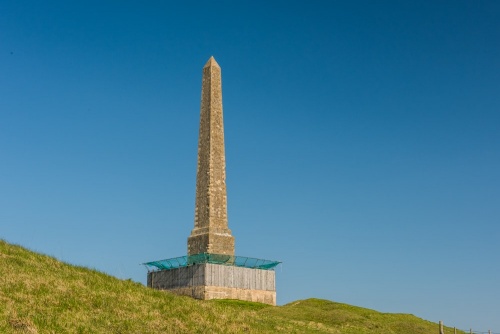 The Lansdowne Monument is a slender stone obelisk built in 1845 by the 3rd Marquis of Lansdowne, the owner of Bowood House, in memory of his ancestor, Sir William Petty. It also served as a focal point or 'eye-catcher' on the edge of the Marquis' Bowood Estate.

The Monument stands on the highest point of the National Trust's Calstone and Cherhill Downs estate, within the earthworks of Oldbury Castle, an Iron Age hillfort. On the slope of the Down, below and to the east of the Monument, is the Cherhill White Horse, one of 8 surviving chalk horses in Wiltshire. 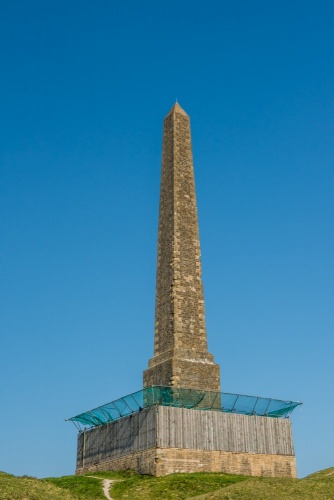 The Monument and its protective fence

It is not surprising that the Marquis of Lansdowne wanted to commemorate Sir William Petty, for his ancestor was a remarkable man. Born the son of a lowly cloth worker, Petty studied to become a physician and was appointed as Professor of Anatomy at Oxford. Oliver Cromwell made him Physician-General to his army in Ireland. While in Ireland he turned his hand to engineering and conducted the first meticulous land survey of the country.

His association with Cromwell did not prevent his rise at the court of Charles II after the Restoration of the Monarchy. He wrote the first statistical analysis of economics, 'A Treatise on Taxes and Contributions'. King Charles later made him a Commissioner for the Royal Navy. His interest in naval affairs led him to design several catamarans, a type of vessel unknown in Britain before that time.

Petty was a founding member of the Royal Society and the man who, more than anyone, amassed the Lansdowne family fortune. One of his descendants, the 1st Marquis of Lansdowne, served as Prime Minister under King George III. 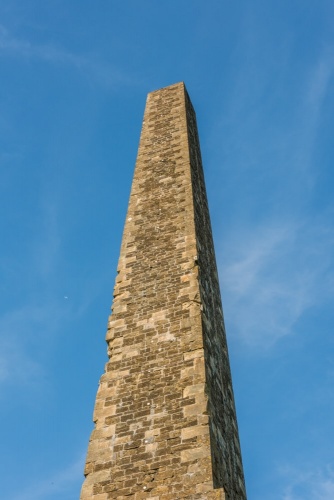 The top of the obelisk

The architect chosen by the Marquis of Lansdowne was Sir Charles Barry, better known to history as the man responsible for rebuilding the Palace of Westminster after it burnt down. He also designed the impressive entrance gates to Bowood House, the home of the Lansdowne family.

The Lansdowne Monument stands 125 feet high (38m) and is just inside the westernmost part of Oldbury Castle hillfort earthworks. It is built of rubble dressed with ashlar. The obelisk stands on a plinth of three large steps. It cost a total of £1359. Curiously, there is no inscription. The Monument is listed Grade II* for its historical interest.

As of this writing, the Monument is protected by a modern timber fence and netting material erected in 2013 by the National Trust to protect the public from the risk of falling masonry. It seems that when the Monument was last repaired in 1988 the stone used was softer than the original stone, and as a result, the obelisk is deteriorating.

The National Trust says that it will cost over £2.7 million to repair the Monument and it is simply in the queue of deserving projects awaiting their attention. In the meantime, it is less appealing than it might normally be, but it is still impressive! 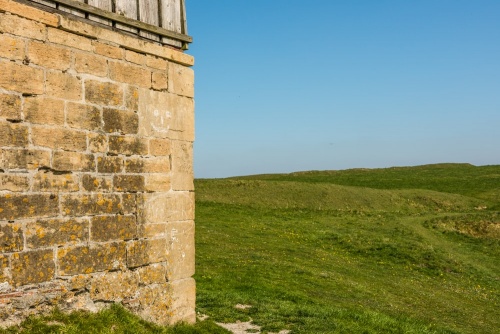 The Monument base and Oldbury Castle hillfort

Finding the Lansdowne Monument is easy. It is visible for many miles around Cherhill village and is in plain sight for motorists on the A4. There are several large lay-bys on the eastern edge of the village, on both sides of the road. We parked right at the village edge in the eastbound lane, crossed the road, and found two information panels describing the site.

From there it was an easy task to follow the signposted trail up the chalk slope to the fenced area owned by the National Trust where there is another information panel. The Monument and the White Horse are easily visible throughout the walk. Just follow the obvious trail to the summit of Cherhill Down and the Monument. From the base of the hill by the A4 it should take no more than 15 minutes to reach the Monument.

More self catering near Lansdowne Monument