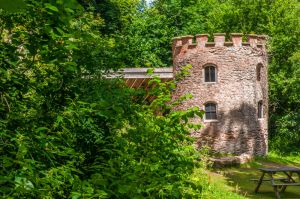 The Folly at Fyne Court

At the core of Fyne Court is a 20-acre nature reserve, managed by the Somerset Wildlife Trust. There is a network of footpaths and nature trails through the reserve, offering an opportunity to explore a number of different wildlife habitats.

Fyne Court was the home of the Crosse family. In the 18th century the grounds were designed as a pleasure garden in the picturesque Arcadian style; a landscape of winding trails, sudden vistas, and half-glimpsed romantic follies. Part of the garden design included planting carefully arranged trees such as cherry and laurel, accented with rhododendron. Today these veteran trees are one of the most appealing features throughout the woodland.

On 1 September 1894 a servant forgot to blow out a candle when she left the house on a trip to Taunton with the house's owner, Mrs Hamilton. The candle flame lit nearby curtains, and by the time a fire brigade arrived from Taunton the entire house was ablaze. The damage was so severe that most of the structure had to be pulled down.

The house was insured to the tune of £4,000, a huge sum at the time, but Mrs Hamilton opted to live in a small cottage near the church rather than rebuild the mansion. All that remains of the large country house is the library and the music room. 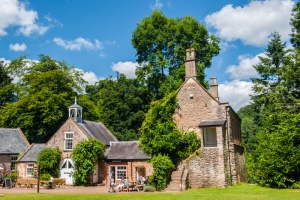 The remains of Fyne Court

With no one in residence at Fyne Court, the grounds and estate buildings began to fall into decay. In 1952 the estate was sold to a fruit merchant, who used the historic walled garden to grow strawberries. The music room was repaired, but most of the grounds became overgrown. In 1972 the last owner, John Adams, bequeathed the estate to the National Trust.

The most famous, or infamous, resident of Fyne Court was Andrew Crosse, a scientist and poet whose experiments with electricity may have prompted Mary Shelley to write the novel Frankenstein. Crosse became fascinated with electricity after attending a lecture at Oxford University.

When he returned to Fyne Court to manage the estate he plunged himself into scientific research. He strung copper wire around the grounds and linked it to measuring equipment in the music room. You can see a replacement pole used by Crosse to string wire, on the hillside above the music room.

One of Crosse's experiments involved passing an electrical current through volcanic stone dipped in acid. To his surprise mites began to appear from the stone. When word of the experiments leaked out some people accused Crosse of trying to play God and create life.

He gave a lecture on his findings to a London audience that may have included Mary Shelley and her husband, poet Percy Bysshe Shelley. Though it is by no means certain that the Shelleys were actually present at the lecture, tradition suggests that Crosse's experiments inspired Mary Shelley to write the Frankenstein tale.

Aside from his controversial experiments with electricity, Crosse was a poet, with most of his works inspired by the landscape of the Quantocks Hills. Crosse is thought to have been acquainted with William Wordsworth and Samuel Coleridge, both of whom lived locally. 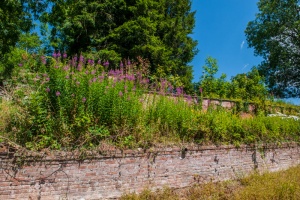 Inside the walled garden

There are three signposted trails winding through the grounds of Fyne Court and beyond. Each walk is colour-coded and well marked. There is a short, level walk suitable for families, taking in some of the most interesting historical features. There is a longer circular walk of about 0.75 mile in length that loops through woodland, along the lakes, and past the boathouse, folly, and walled garden. The longest walk is about 1.5 miles long and is geared towards seeing local bird and wildlife in the surrounding woodlands.

Highlights around the grounds include a wooden pole that stands where Andrew Crosse installed a pole as part of his electricity experiments. Children will probably be most impressed by The Folly, a summerhouse built in the shape of a medieval castle. A short walk through woodland from the Folly is the Serpentine Lake, and at the end of the lake is a boathouse, which, like the Folly, formed part of the original landscaping. A more modern feature is the Sky Glade, an open space made for lying back and gazing at the heavens.

If you fancy something a bit more energetic, the National Trust website outlines a 6.5-mile walk taking in Broomfield Hill and Cothelstone, offering panoramic views over the Quantocks.

I found Fyne Court a delight. It is fascinating to see the picturesque grounds of a stately home without the stately home! The walking trails are easy and very enjoyable. Fyne Court makes for a very enjoyable day out in the country, in a wonderful historic landscape. Do take time to enjoy the small exhibit on Andrew Crosse in the visitor centre; the story his life at Fyne really makes the history of the place come alive. 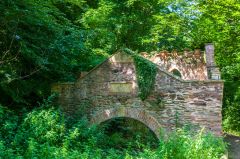 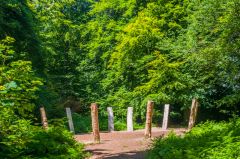 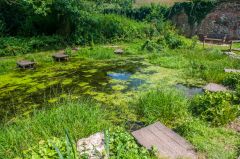 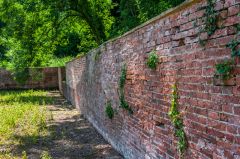 More self catering near Fyne Court >> 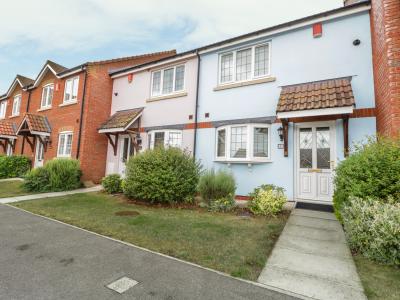 This modern attached cottage is situated in a residential cul-de-sac of Huntworth, near the Somerset town of Bridgwater.
Sleeps 4 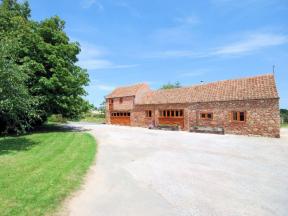