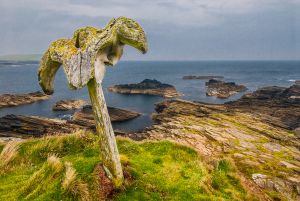 A short - and lovely - walk from Birsay brings you to a restored 19th-century fisherman's hut built into the side of a cliff. Deep grooves in the ground called 'nousts' or 'noasts' show where fishermen drew their boats up high onto the shore for protection.

A short distance beyond Skiba Geo is a peculiar monument - a whalebone has been set on a post above the shore. Why on earth erect a whalebone on the edge of the cliffs? The story goes that sometime around 1876 a Right whale washed up on the shore at Birsay.

Right whales were prized by whalers because they were slow swimmers and carried plenty of blubber, or whale fat. The local fishermen could have sold the whale to a company that specialised in boiling down the blubber for oil, and grinding the bones for fertiliser.

Instead, they decided to do the work themselves. Unfortunately, there were too few of them to turn the whale carcass over once they'd cut up the top of the carcass. So the locals essentially had a half whale worth of blubber to sell. It took at least 25 years for the entire whale to decompose and the bones to wash away or be used by local families.

A whale vertebra was used as a milking stool, another piece was used to make a kitchen chair seat. Part of the jawbone was set upon a post, with a crossbar formed from part of the skull. The 'sculpture' could not have been put up before 1880 at the earliest but was probably erected before 1890.

It was blown down in a gale in 2008 and has suffered over the years from children swinging on it, but there is now a metal rod inside the jawbone and the post has been set in concrete so it should be good for another century or two!

This is a lovely walk along some of the finest coastline in Orkney (and that's saying something!). Park at the Brough of Birsay parking area and take the signposted path along the coast in an easterly direction. When the tide is out you can watch seals sunning themselves on the rocks, and seabirds soaring above you.

The path leads to Skiba Geo, where the fisherman's hut stands near a set of stone steps down to the shore. I found the nousts fascinating; they look like a turf-covered starburst (some imagination is required). They were needed because of the high winds on Orkney, so fishermen could turn their boats upside down for the winter, and the depression in the earth would help shelter them from the gales.

Carry on past a bench set above the cliffs to the far point, called Skeres Naquer on OS maps, where you'll find the 'Birsay whalebone'. It has been described as looking like an owl in flight, and that's rather a good description.

If you carry on further along the coast you'll come to Longaglebe Geo, a narrow cleft in the sea cliffs, but if you'd rather avoid the extra walk just return along the shore the way you came, back to Birsay. If the tide is out you can walk across to the Brough of Birsay or explore tide pools along the beach. 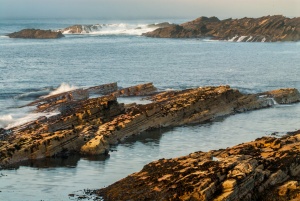 The coast at Skiba Geo 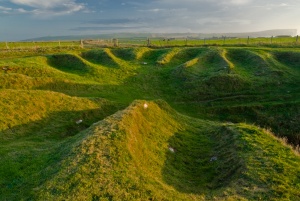 The nousts for storing boats 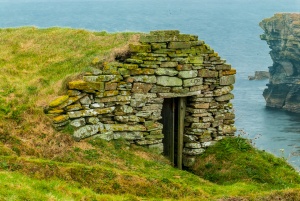 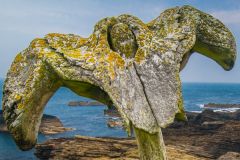 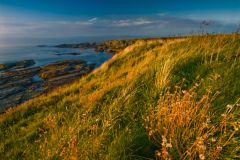 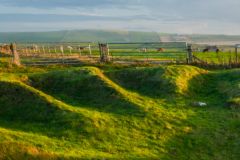 Nearby accommodation is calculated 'as the crow flies' from Skiba Geo & Birsay Whalebone. 'Nearest' may involve a long drive up and down glens or, if you are near the coast, may include a ferry ride! Please check the property map to make sure the location is right for you.