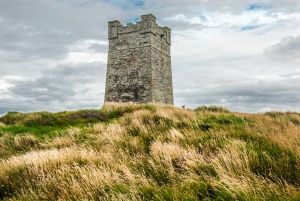 Field Marshall Lord Kitchener is probably best known today for the famous WWI recruiting poster featuring his face and the slogan, 'Your Country Needs You'. His military career, however, extended far beyond posters and slogans.

Kitchener served in the ill-fated attempt to rescue General Gordon from Khartoum, and later fought and defeated the Sudanese forces under Abdullah al-Taashi. When the Second Boer War broke out in 1899 Kitchener devastated the Boer farms and herded women and children into huge compounds known as concentration camps.

Not only was he made a full General after the conflict, but the idea of concentration camps was born, with horrible consequences during WWII. Then in 1916 Kitchener was responsible for savagely putting down the Easter Rebellion in Ireland.

It is safe to say that although Kitchener was a national hero in England, he was hated in other countries. The conspiracy theories surrounding his death are more plausible given how controversial his military career had been.

The Wreck of the HMS Hampshire

Kitchener was said to be on a secret mission to Russia, an attempt to convince the Tsar to stay in the conflict. With him in the hold of the Hampshire was a quantity of gold bullion, to be used to bribe the Tsar if conventional arguments failed.

The Hampshire set off from Scapa Flow on Monday, 5 June 1916, with a crew of 643 men, plus Kitchener and his staff. The weather was foul, with a Force 9 gale and high seas. Under normal circumstances, there is no way the ship would have sailed, but Kitchener's mission was thought to be so urgent that the Hampshire went ahead despite the storms.

What happened next is a mixture of fact and conjecture. The ship may have tried to turn back. We do know that a telegraph message was sent from Birsay Post Office to Kirkwall saying that the vessel seemed to be in distress. A second message sent shortly after said the vessel was down.

Now things get complicated; the local RNLI at Stromness asked the Naval HQ at Stromness if they should launch a lifeboat. To their surprise, the military strongly rejected the offer of assistance. Local people hurried to the cliffs at Marwick to offer what help they could, only to find armed soldiers on the clifftops, preventing any access to the sinking ship.

It took four hours after the vessel sunk for the first lifeboat to reach the shore. Some men died on the rocky shore, others never made it that far. Only 12 men survived, out of a total of 667 on board. Lord Kitchener was not among the survivors.

The official government version of events is that the Hampshire struck a mine laid by a German U-boat. A total of 22 mines were laid in late May and were not detected because regular mine-sweeping operations were delayed because of bad weather. So the wreck was simply a case of bad luck, a German mine, and bad weather.

The peculiar behaviour of the military authorities and the fact that Kitchener's body was never found gave rise to numerous theories to explain events. One theory was that Kitchener had never been on board at all. Another suggested that the IRA had assassinated him in reprisal for his handling of the Easter Rising.

The most persistent rumour was that a Boer named Fritz Joubert Duquesne joined Kitchener's party, disguised as a Russian duke. He signalled a German U-boat, then made his escape in a life raft. This same Duquesne later ran a successful undercover spy ring in the USA at the outbreak of WWII.

And what of the gold? It was never recovered, and its fate is unknown.

Kitchener's death had the same social impact as JFK's assassination. He was so popular in Britain that people were shocked by his death. Yet the government did not erect a memorial to his memory; the people of Orkney did. The Kitchener Memorial was erected in 1926 after funds were raised by public subscription.

The plaque at the base of the memorial reads:

This tower was raised by the people of Orkney in memory of Field Marshall Earl Kitchener of Khartoum on that corner of his country which he had served so faithfully nearest to the place where he died on duty. He and his staff perished along with the officers and nearly all the men of HMS Hampshire on 5th June, 1916.

There is no access to the memorial interior, but the walks along the cliffs are spectacular and the memorial acts as a prominent local landmark for the RSPB Marwick Head nature reserve, home to razorbills, kittiwakes, guillemots and an occasional puffin.

Just a short distance to the north is the Earl's Palace at Birsay, and the ancient monastery on the Brough of Birsay.

There is a small parking area at Cumloquoy, on a minor road off the B9056 south of Birsay. A trail leads up to the clifftop, and you can easily see the memorial from a distance. It is no more than 500 metres from the parking area to the memorial. From there, a clifftop trail leads in both directions so you can explore the surrounding RSPB reserve and enjoy the spectacular views. 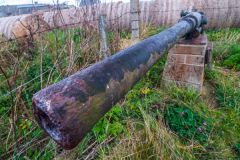 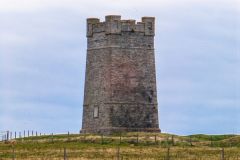 About Kitchener Memorial, Marwick Head
Address: Marwick Head, Birsay, Mainland, Orkney, Highlands and Islands, Scotland
Attraction Type: Historic Building
Location: Parking in a small parking lot at the bottom of the hill, on a minor road off the B9056 from Birsay. It is roughly 500 metres from the parking area to the Memorial.
Location map
OS: HY228251
Photo Credit: David Ross and Britain Express

Nearby accommodation is calculated 'as the crow flies' from Kitchener Memorial, Marwick Head. 'Nearest' may involve a long drive up and down glens or, if you are near the coast, may include a ferry ride! Please check the property map to make sure the location is right for you.