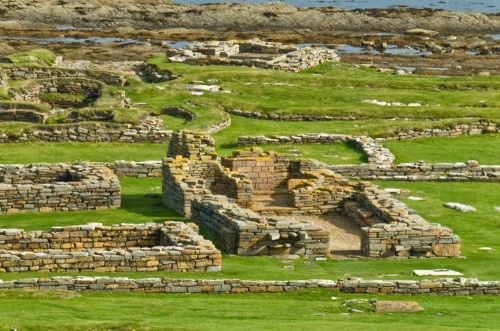 Summary
The remains of Pictish and Norse settlements in a spectacular island setting off the north-west coast of Orkney Mainland. Birsay was the site of the first cathedral in Orkney, and remains of the 12th-century church can be explored. The Brough is connected to the mainland by a causeway which can be crossed only at low tide. The proliferation of archaeological remains makes the Brough of Birsay one of the richest historical sites in Scotland.

The first settlement on the Brough of Birsay dates from the Pictish period, around the 7th century AD. The most famous evidence of the Picts is a symbol stone found in the graveyard (see the drawing below).

The stone depicts three warriors, or noblemen, bearing spears. The symbol stone itself is preserved in the visitor centre beside the site, while a modern cast of the stone stands within the enclosure. There has been some speculation that the Brough was a centre of power during Pictish times and was, perhaps, the first capital of Orkney. Traces of Pictish buildings have been found, and the remains of jewellery within a structure that must have been a workshop. 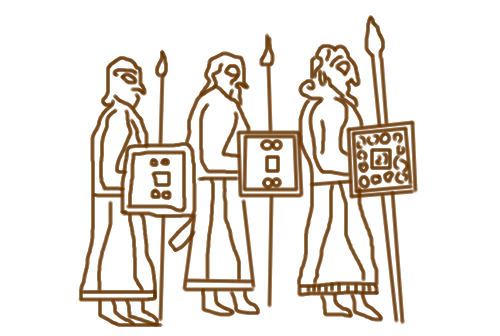 The Picts stayed on the Brough until at least the 8th century. In the ninth century, the first Norse arrived. Northern Mainland was ideally located on the route taken by Norse raiders bent on Iona and Ireland.

The Norse raiders were soon followed by settlers, and the remains of the earliest Norse buildings can be seen between the later church and the cliffs overlooking the sea. Some of the buildings are well preserved, and architectural features can easily be seen, including under-floor heating in one house. A sauna was also found, and, some distance to the north is a small smithy.

The Norse stayed on the Brough of Birsay until at least the 12th century. At that time a church with an associated monastery was built. Later Norse buildings are found to the south-west of the church. The monastery at Birsay did not last long, but the site remained a site of religious pilgrimage throughout the medieval period. 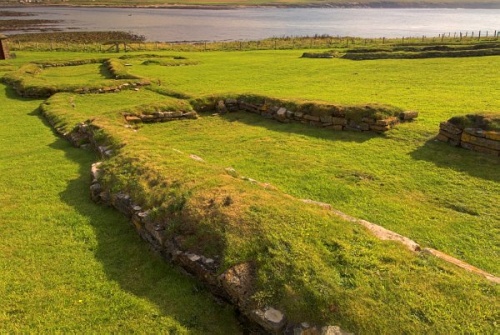 Foundation walls at Brough of Birsay

The mystery of Birsay and St Magnus

Generations of historians have given Birsay a reputation as an important religious and political centre in the Norse period. Most of this speculation has been founded on the Orkneyinga Saga, which states that Thorfinn, earl of Orkney, had his seat at Birsay, and that he built a minster there in the mid 11th century, which served as the seat of the first Bishop of Orkney.

This has been alternately interpreted as meaning that the church on the Brough of Birsay was founded by Thorfinn, that it was a bishop's cathedral, or that Thorfinn performed the same deeds at the village of Birsay.

Unfortunately, the saga is not specific about the location of the minster, or Thorfinn's residence. Its reference to Birsay could refer to the parish of Birsay and Harray, so we are on very thin ground ascribing to the Brough any specific role in religious and political life.

We do know that the remains of St Magnus the Martyr were brought to Birsay after his death around 1116, though, again, we do not know if the Birsay in question was the village, the Brough, or elsewhere in the area. We know that the martyred saint's remains stayed in Birsay until they were removed to a new cathedral in Kirkwall around 1135, and it is likely that the importance of Birsay declined after that time. 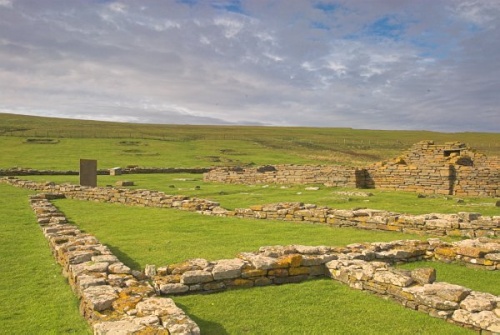 The monastic church was built in Romanesque style in the early 12th century. The church is surrounded by a roughly rectangular wall, enclosing a graveyard to the south of the church. The church itself is rectangular, with a rounded apse at the east end, and a small cloister to the north, while traces of a tower stand at the west end.

The interior had stone benches, and stone altars either side of the chancel. Traces of glass were found in the church, suggesting that it boasted glazed windows. Very few other medieval finds were unearthed during excavations of the site, suggesting that the church and its associated monastery did not last long. It appears, in fact, that the tower of the church was never completed.

The most likely explanation for the short life of the church is that the remains of St Magnus the Martyr were removed from Birsay village church to the new cathedral in Kirkwall, and as a result, Birsay and the Brough diminished in religious and political importance.

The Brough of Birsay is a tidal island located north of the village of Birsay at the northwestern tip of Mainland, at the Point of Buckquoy. Access is by road via the A967 from Dounby or the A966 from Evie and Finstown (the roads converge on Birsay). There is parking at the mainland end of the causeway for about 20 cars.

The site is only accessible for two hours each side of low tide, so you will need to enquire about tide times at the Stromness or Kirkwall Tourist Information Centres, the Harbourmaster's Office in Kirkwall, or at the village shop in Birsay. Tide tables are also printed in the local newspaper, The Orcadian.

A rough map of the Brough of Birsay settlement

The Brough of Birsay is one of the highlights of any visit to Orkney. It is well worth waiting for the tide to uncover the causeway and allow you to walk across to the Brough; the location is magical, and the remains are well presented and informative.

Take the time to walk through the gate at the western end of the enclosure and take the path up the hill above the settlement. The view looking back down onto the site gives you a great overview of the layout of buildings and how the later buildings fit beside the earlier church. And, archaeology aside, the views along the coast are quite stunning.

Birsay itself offers wonderful coastal walks as well as the ruins of a 16th century Earl's Palace. A signposted walk east from the parking area towards Skiba Geo is one of our favourite coastal walks on Mainland Orkney.

Nearest Accommodation to Brough of Birsay:

Nearby accommodation is calculated 'as the crow flies' from Brough of Birsay. 'Nearest' may involve a long drive up and down glens or, if you are near the coast, may include a ferry ride! Please check the property map to make sure the location is right for you.

More self catering near Brough of Birsay

More Hotels near Brough of Birsay

More bed and breakfasts near Brough of Birsay