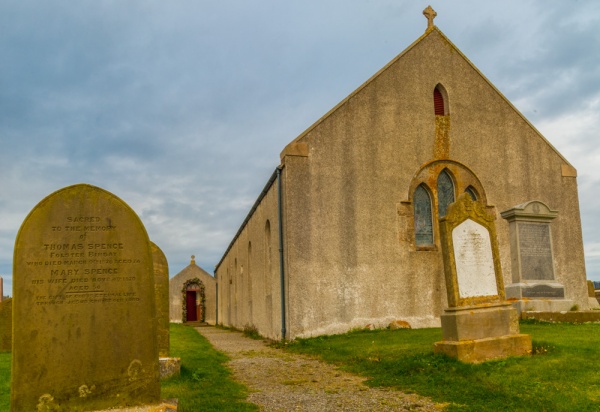 The Birsay area in the north-west corner of Orkney Mainland is home to several historic sites, including a 16th century Earl's Palace, and both Pictish and Norse settlements on the Brough of Birsay. One site that is often overlooked by visitors is St Magnus Church, near the Earl's Palace.

The church we see today dates from 1760, enlarged in 1867 and restored in 1867, yet it incorporates a much earlier medieval church and stands on the site of Orkney's first 11th-century cathedral. 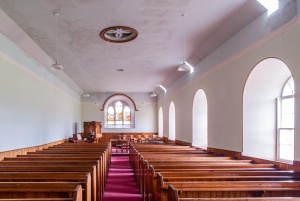 The history of St Magnus' church goes back to at least AD 1064, when Earl Thorfinn built a minster known as Christchurch. The minster later became the parish church of Birsay. When the Viking Earl Magnus Erlendson was murdered on Egilsay in 1116 his body was brought to Christchurch for burial.

His grave site almost immediately gained a reputation for miracles and ethereal visions, and visitors reported 'heavenly lights' at his grave. After 20 years the Earl's body was exhumed and placed in a shrine over the altar, and he was proclaimed a saint.

So popular was St Magnus among Orkadians that a new cathedral was built in his honour at Kirkwall, and the saint's bones reinterred there. So St Magnus' Church lost its saint, but continued to serve as the parish church for the Birsay area.

The early medieval church was rebuilt in a cruciform plan in 1664. Then in 1760 it was rebuilt again in its current rectangular layout. In 1875 a larger church was built at Twatt, and Birsay's church became redundant. The church was given by the Church of Scotland to a local trust charged with preserving the building. the trust maintains this ancient building and keeps it open to visitors. If the church happens to be closed you can get a key at the village shop.

When the church was restored in the early 20th century a pair of worn gravestones were found under the floor. One of these gravestones now stands beside the pulpit and the other is in the porch. The stone nearest the pulpit shows a coat of arms and the date 1645. 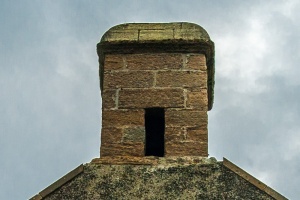 Other reminders of the building's early origins may be more difficult to spot, but they are there if you keep your eyes open! The belfry dates to 1664, and set into the south wall is a 13th-century window frame. The lintel stone is inscribed with the Latin word 'Bellus', probably a reference to 'Mons Bellus', the 16th-century residence of the Bishops of Orkney, which once stood beside the Earl's Palace.

A piece of dressed sandstone inside the church probably formed part of the original Christchurch, and was discovered in the garden between the church and the nearby Old Manse. The font is a fascinating feature, carved from red sandstone, with an extremely small bowl on a central column, supported on a plinth.

The interior of the church is simple, even plain, with the only real embellishment an attractive stained glass window at the east end of the building, depicting scenes from the life of St Magnus. The window was designed in 1904 by the wife of the minister, Mrs Loveday McPherson, and executed by Alex Strachan. 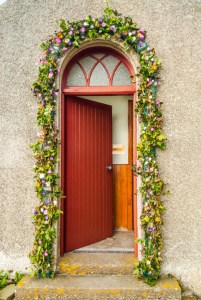 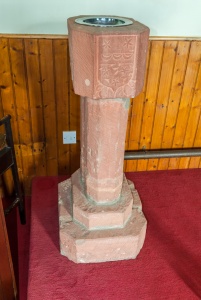 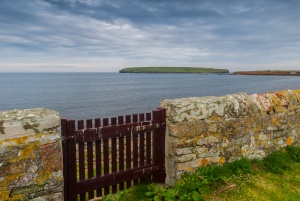 The churchyard gate, looking towards
the Brough of Birsay

Nearby accommodation is calculated 'as the crow flies' from St Magnus Church, Birsay. 'Nearest' may involve a long drive up and down glens or, if you are near the coast, may include a ferry ride! Please check the property map to make sure the location is right for you.