HERITAGE HIGHLIGHTS:   The east end of the church, including the arch of the east window, still stand to full height. 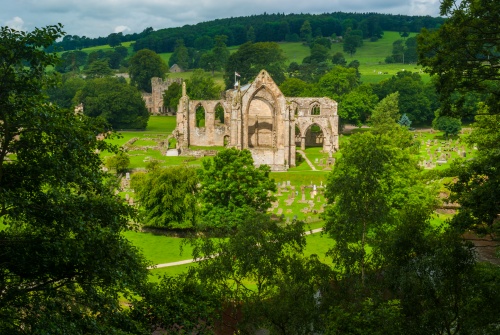 Bolton Abbey is a 12th-century Augustinian priory set in a superb position on the banks of the River Wharfe. The abbey was founded around 1154 by monks from Embsay who were granted land here by Lady Alice de Romille of Skipton Castle.

At the Dissolution of the Monasteries, the priory buildings were sold to the Cliffords of Skipton Castle, and later to the Cavendish family, Dukes of Devonshire. However, the nave of the priory church survived to serve as the parish church for the then village of Bolton-in-Wharfedale.

Visitors can enjoy the church, which is open regularly. Visitors will enjoy walking across the River Wharfe by way of stepping stones (if the water level is low) or by way of a footbridge. From the far bank, there are footpaths up the hillside and beyond, where fabulous views can be had over the abbey ruins and the surrounding countryside.

A short walk along the Wharfe leads to The Strid, a series of narrow, rocky gorges through which the river bursts quite dramatically.

NB. Technically Bolton Abbey is the name of the village and the estate, while the Augustinian monastery was called Bolton Priory, but most people call the monastery Bolton Abbey as well. 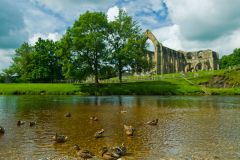 More self catering near Bolton Abbey >>