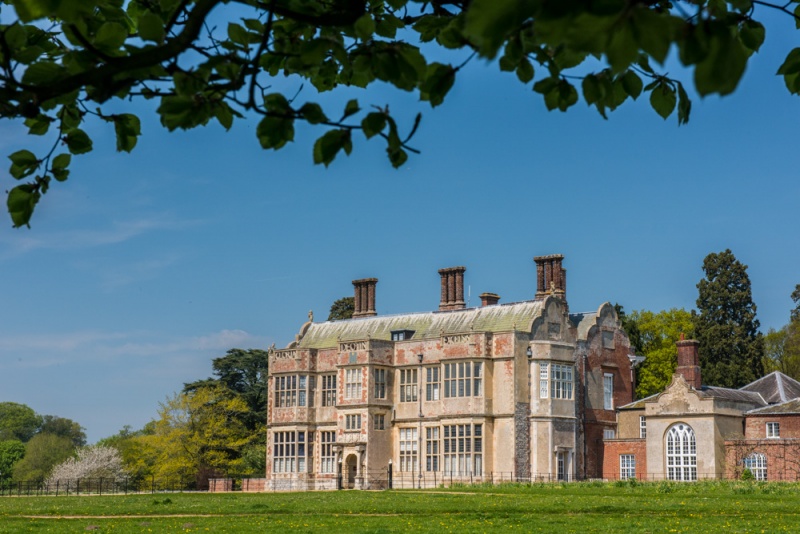 Felbrigg hall was the home of the Windham family for 500 years, and stands in a beautiful woodland park. The house was designed by Robert Lyminge, who also designed Blickling Hall and Hatfield House, and features a superb Gothic library and great hall. 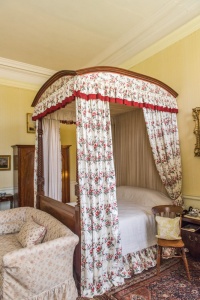 Four-poster bed in a
first floor bedroom
The House
There was a medieval house at Felbrigg, belonging to the Wyndham family (note the change in the spelling of the family name which occurred in the 16th century). When the Windham's neighbours at Blickling Hall rebuilt their house in fashionable Jacobean style, Thomas Windham decided to follow suit.

In 1620 Windham built a new house, altering his medieval family home to create a symmetrical Hall in the shape of an E, with a later 1680 extension altering the basic layout.

The exterior is an odd mix of stone, flint, brick, and render, but the interiors are a wonderful mix of Jacobean, Georgian, and opulent Victorian. The medieval great hall has been transformed into a comfortable Victorian chamber, though the large windows have heraldic stained glass dating to the 16th century.

One entire wing of the Hall is decorated in Restoration style, to a 1752 design by James Paine. The dining room is heavy with Rococo embellishments, with ornate plasterwork and a highly decorative overmantel featuring a dying Gaul. Even better is the drawing room, with an exquisitely detailed plasterwork ceiling, a glorious jumble of fruit and wildfowl.

The Cabinet displays art treasures brought back from Europe during a Grand Tour by William Windham in the 1740s. Windham not only purchased the paintings of classical sites, he specified exactly how each one was to be displayed. There are more Grand Tour mementos on the Georgian staircase. Look for a remarkable statue known as 'The Headless Lady', part of an Athenian grave monument carved around 350 BC.

A later Windham was William 'Mad' Windham, who died in 1866. Mad Windham was certainly an unusual character; he was given to odd behaviour like dressing his uncle tried unsuccessfully to have him declared a lunatic. He posed as a London policeman and in that disguise rounded up prostitutes. He also dressed as a train guard and gave loud whistle blasts and caused confusion on rail platforms.

Mad Windham married Agnes Willoughby, a lady the National Trust, in their entertaining guidebook, politely calls a 'lady of easy virtue'. After a short and financially disastrous marriage, Lady Agnes ran off with an Italian opera singer. The damage was done, and the family fortune was lost.

The upstairs features a suite of Georgian bedrooms, one with wonderful Oriental wallpaper. William Windham spent a small fortune on a specialist to hang his hand-painted Chinese wallpaper in 1752. The library features over 5000 books. The family collected so many books that they had to block up a large bay window to make room for more bookshelves.

Below stairs look for the poem to a local woman scratched onto a window by William Windham II's lovelorn tutor. The Servants Hall still boasts the furniture made for it in the 1750s.

The grounds feature a walled garden with a brick dovecot, and a 1707 Orangery modelled after Nicholas Hawksmoor's Great Orangery at Kensington Palace.

A short walk from the Hall is the medieval church of St Margaret, with ornate tombs to the Windham family. 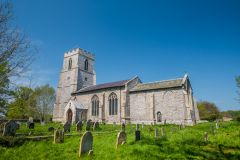 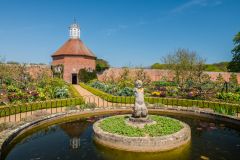 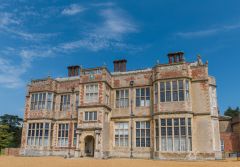 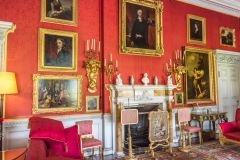 More self catering near Felbrigg Hall >>