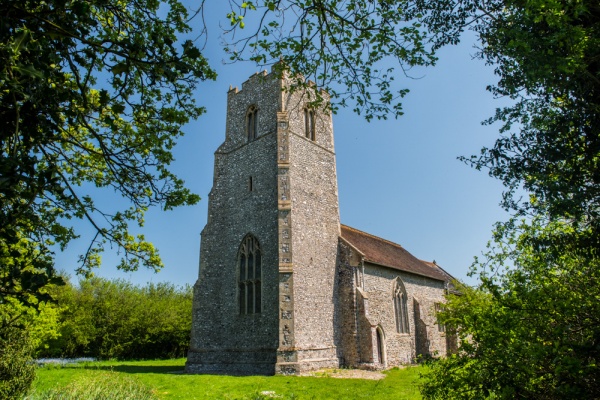 A fascinating 15th-century church in an isolated location, St Peter's is well worth visiting for its collection of excellent funerary monuments, including several Jacobean memorials to members of the Palgrave family. 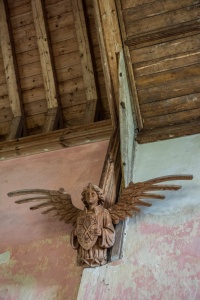 It is hard to pick the best of these monuments, though a good choice would be the wall memorial to Sir Austin, or Augustine, Palgrave and his wife Elizabeth, in the north aisle (c. 1635).

The beautifully carved busts of the couple are set in individual alcoves with figures of lions and cherubs surrounding them. The likenesses appear to have been drawn from life, rather than being symbolic, as memorials often are.

Nearby is the tomb chest of lawyer John Palgrave (d. 1611). His tomb is adorned with figures representing Peace, Labour, and Justice, but all three figures have had their heads removed, presumably through an act of vandalism.

Another very nice Palgrave memorial is that of Margaret Pope (nee Palgrave), who died in 1624. This wonderful wall memorial shows a statue of the deceased kneeling in a rounded, curtained alcove, the curtains held apart by angels.

The Palgraves became lords of the manor in the 15th century. Their family seat was North Barningham Hall, now a farmhouse. The last Palgrave was Sir Richard, the fourth Baronet, who died without hers in 1732.

The Windham family of Felbrigg purchased the estate and pulled down part of North Barningham Hall. They did not make their family seat at Barningham, and without their presence, the parish became a quiet backwater By 1886 there were only two residents of North Barningham parish, so it is no wonder that the church became redundant.

One intriguing, even mysterious, note is the rather peculiar 'rose window' design set into the nave floor. This pattern, which looks similar to a traditional wheel-head cross, is created from bits of brick and flint. There is an outer circle of stone sections around a central boss with eight stone spikes radiating outward like spokes in a wheel.

But why is it there? Was it meant to convey a religious message? Mark the location of a family crypt? We don't know, and that is part of what makes it such a fascinating mystery. Immediately beside the wheel cross is the ledger slab of Robert Bacon, suggesting that a family vault lies beneath the floor, so it is entirely possible that the Bacon family inserted the wheel cross to mark the vault.

In the east wall of the north aisle is a pillar piscina. Its location in the aisle suggests the presence of a side altar, possibly serving a guild chapel. On the south sanctuary wall is a double piscina dating to the 14th century, and beside it a sill sedilia under an ornately carved arch.

Set into the floor of the north aisle are nine brass elements in a large stone slab. The brass commemorates Henry Palgrave (d. 1516) and his wife Anne. The couple is shown full-length. He is dressed in full armour and she in early 16th-century dress. Beneath their feet are two groups of children; a cluster of five kneeling boys and seven girls. The corners of the slab have heraldic shields. These are replicas of the originals, which were stolen in the 1960s and never recovered.

This intriguing church is no longer used for regular worship and is cared for by the Churches Conservation Trust.

St Peter's is not the easiest church to find. It is located on a country lane far off the beaten track. We used the official postcode of NR11 7LB for our satnav and found ourselves at the junction of Plum Lane and Barningham Road, with no church in sight.

St Peter's is actually located south of that junction, up a farm track leading to North Barningham Hall, though the church is hidden behind a stand of trees and not visible until you are almost on top of it. Look for a road junction where a minor road branches off towards Baconsthorpe and you will see the farm track opposite. There is no parking area, but we managed to pull off onto the verge just past the churchyard.

NOTE
The Palgrave connection with North Barningham continues to this day. We received an email from a member of the Palgrave Society letting us know that the Society has been helping with church conservation and organising occasional services. 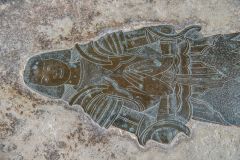 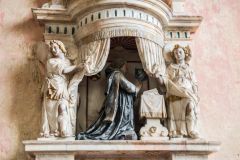 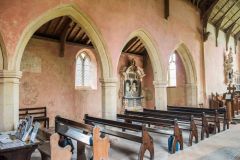