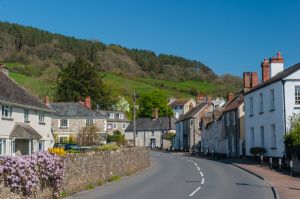 Axmouth is an attractive village on the banks of the Axe estuary, about one mile from the sea. An Iron Age hillfort rises above the church of St Michael, which boasts a lovely Norman doorway. The village is popular with bird watchers as a good place to find a variety of seagoing birds such as gulls, terns, and numerous wading birds.

The earliest evidence of human habitation here is the Iron Age hillfort atop Hawksdown Hill. After the Roman conquest, Axmouth was very probably the southern terminus of the Fosse Way, which angled in a north-easterly direction across Britain to Lincoln.

The village as we know it today dates at least to the 7th century, and was owned by King Athelstan, Edward the Confessor, and later, William the Conqueror. At the time of the Domesday Book in 1086, there were a dozen smallholders, 8 villages, and 4 slaves in Axmouth. Today the population numbers about 500.

The River Axe used to be much wider, but silting narrowed the waterway and diminished the usefulness of the harbour. Numerous attempts were made to improve the harbour from the 16th to the 19th century.

Then in 1803, a pier was built, allowing ships up to 100 tons to dock, and a shipping trade developed between Axmouth and London. The coming of the railway in 1868 spelled the end for regular shipping from Axmouth, and much of the pier was destroyed in a gale the following year. The harbour is used by pleasure craft today, and there is a popular yacht club.

As for the village itself, there are several Elizabethan houses and farmhouses from the 16th to the 19th century. Several of the houses are thatched, as is a popular pub opposite the church.

St Michael's Church dates to at least 1150 AD, with a 13th-century aisle and a 15th century west tower. Inside the church are the effigy of a 14th-century priest, a 1746 mural monument to Richard Hallett of Stedcombe, and several very good 14th-century wall paintings.

One depicts a martyr, and the other shows Christ displaying his wounds to a figure that could be St Peter or the Madonna. In the south chapel is a monument to Dame Anne Erle and her son Thomas, dated to 1653. 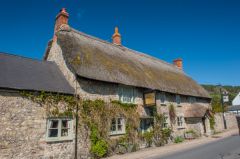 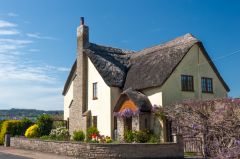 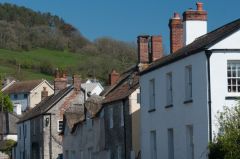 More self catering near Axmouth >>

More bed and breakfasts near Axmouth >>