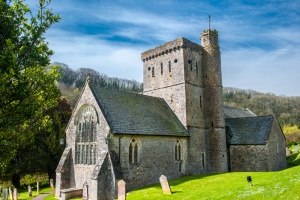 St Winifred's church is one of the oldest churches in Devon, with roots going back to the 10th century. The first church here was established some time around AD 995, but we know very little about that early building.

The location is interesting; rather than stand atop a hillside where the church would be visible over a wide area, St Winifred's is set on a terrace that cannot be seen from the sea. It is possible that the isolated spot was chosen so that the church could not be seen by Viking raiders sailing along the Devon coast. It is also possible that the church was built on the site of an earlier pagan holy place, a common practice when Christianity was being introduced into Britain.

The oldest part of the present building dates to the Norman period, with rebuilding throughout the medieval period. The nave is Norman, with 13th century transepts, while the chancel is 14th century.

The church is exceptional for a small coastal village. St Winifred's is one of the best churches in Devon, possibly because it was owned by the monks of Exeter Cathedral, and several bishops must have taken a personal interest in funding architectural improvements of the medieval period. 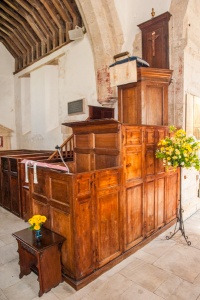 The most interesting historic feature is the three-decker pulpit, a rarity in Devon. The lowest level was used for reading the lessons, the middle level for prayers, and the upper level for the sermon. The font, made of local Beer stone, is 15th century, and there is a finely carved Jacobean screen, early 18th-century altar rails, and a Elizabethan west gallery. The wagon roof in the nave is 15th century, and is decorated with carved oak bosses. There is a very nicely carved three-seat sedilia in the chancel, and a piscina of the same date.

The dedication to St Winifred is unusual. Winifred was a fairly unknown 7th-century Welsh saint in the pre-Norman period. She was the niece of St Bueno, and according to rather fanciful legends, Bueno preached at Branscombe, which might explain the church dedication to his niece. The village is also linked to St Branwallader, or Brannoc, a 4th-century martyr.

The name Branscombe may have been derived from Brannoc. Records suggest that the church held St Brannoc's arm as a relic, though it was taken to Milton Abbey in Dorset in AD 933 on the orders of King Athelstan.

A 15th-century document says that the saint's body was held in a stone coffin, like the one that lies outside the south porch. Unfortunately for romance, a Victorian rector records that the coffin was brought to Branscombe from Otterton.

In the south transept is a fragment of another ancient stone coffin, discovered under the floor during restoration work in 1911. 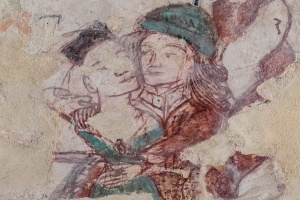 A fragment of restored wall painting

The most impressive memorial in the church is an Elizabethan altar tomb to Joan Wadham, who died in 1583. She must have lived quite a life; she was married first to John Kellaway of Cullompton, by whom she had 14 children, then after Kellaway died she married Sir John Wadham and had 6 more children with him. She outlived her second husband, who died in 1577.

Curiously, the tomb shows a likeness of Joan behind a statue of each of her husbands. This double appearance is thought to be unique in family tombs in England. On the pediment above the effigies is the Wadham badge of a red rose. We do not know who had the tomb erected, but it may have been Joan's son, Nicholas Wadham, the founder of Wadham College, Oxford. 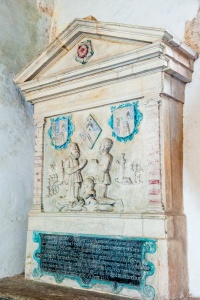 Nearby is a rather unflattering copy of the Wadham memorial, commemorating an unknown person. This memorial may be to Elias Holcombe, who died in 1585.

In the chancel is a very finely crafted memorial to Anne Mychell, who died in 1606. This grandiose tomb is a beautiful example of neo-classical work, in Renaissance Corinthian style. In the south transept you can see a rare (in England) Maltese Cross carved into a Purbeck marble floor slab, thought to be 15th century.

The slab is inscribed with a Latin verse which translates as 'pray for the soul of John Hedmunt'. It is possible that the cross means Hedmunt was a priest. Another slab, near the altar, also bears a cross and is thought to commemorate a medieval priest.

In the south transept is a child's grave, inscribed with a very poignant verse

The grave commemorates Anna Bartlett of Hole House, who died in 1699.

Almost as moving is a plaque to the memory of Mrs Edith Bartlett, who died at the age of 16 in 1704. As the 'Mrs' indicates, she was married quite young, and though the cause of death is not recorded, it seems possible that she died in childbirth.

Most medieval scratch dials are semi-circular, with a radiating series of marks scratched into the wall below a gnomon, or marker hole. This sundial, however, is not circular, but linear, with Roman numerals scratched in a row, so that the southernmost buttress of the chancel casts a shadow on the correct hour mark. 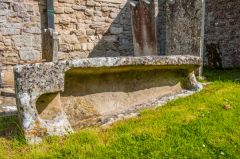 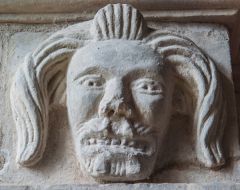 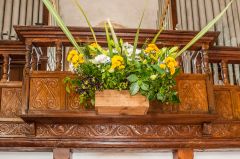 Self Catering near Branscombe