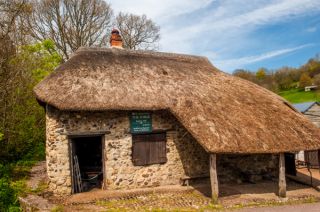 A collection of historic buildings in a lovely village setting, including a restored working mill, bakery, and forge. The forge is the only operational thatched forge in England and sells iron articles made on the premises.

Said to be the last 'traditional' bakery in Devon, this picturesque thatched building was operated until 1987. Nothing high-tech here; until 1946 even the dough-mixing was done the old-fashioned way, by hand. Fresh-baked goods were delivered around the village and surrounding area by a horse and cart. The National Trust has kept the bakery just as it was when the last bakers retired; with open fires and historic baking equipment. Not just a museum piece; you can have a lovely tea at the bakery as well.

A 19th-century water mill still in working order. There were once 4 mills in the village, but this is the only one to survive. It is powered by water from a leat that runs from the Bakery. It was left to decay after WWII but restored in the 1990s to full working order, and the milling machinery, millstones, and waterwheel are all fully functional. You can see the mill in action and learn how corn was ground here. There are regular milling demonstrations. 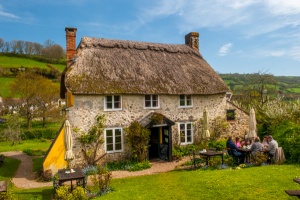 The 'signature' building at Branscombe, this is possibly the oldest thatched forge in the country still in operation. It was built around 1580 and has been used as a blacksmith forge for at least 200 years. It is not just a museum-piece; you can actually buy small metal objects made at the forge.

There is much more to Branscombe than the three main historic buildings. For example, in the 19th century there were allotments along the top of the cliffs between Branscombe and Sidmouth. Due to unique climatic conditions, the Plats produced early crops including vegetables, strawberries, and flowers.

All those crops were outshone by the potato yield, and the Weston Plats potato crop rivalled Jersey for volume of production. The farmers used seaweed for fertilizer and donkeys to carry their goods. They continued in production until the 1960s, when tourism became the major industry in Devon. They were left to become overgrown but were later acquired by the National Trust. The overgrowth was cleared, storage sheds have been rebuilt, and the Plats are now open to visitors.

Between the 17th and 19th centuries, Branscombe was at the centre of a thriving cottage industry for hand-made lace. The local lace-makers were so famous for the quality of their work that women from Branscombe and Beer were asked to make the wedding dress for Queen Victoria,

While the lace-making at Branscombe was well-known, there was another activity here that was top secret. During World War Two a secret factory was built here to make aircraft parts and shell fuses for the military.

A low, Norman building featured in the popular book, England's Thousand Best Churches, by Simon Jenkins. There are remnants of a 15th-century wall painting, Norman tower and stair turret, and an unusual triple-decker pulpit dating to the 18th century.

This is something the National Trust does really well in my opinion; preserve not just a single building of historic value, but a setting, a community, group of buildings linked by local history and historic interest. 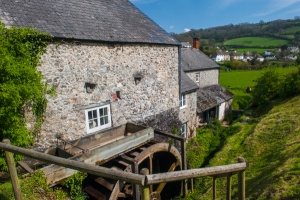 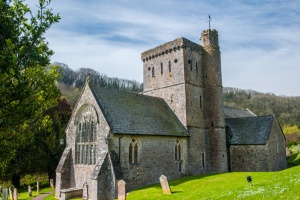 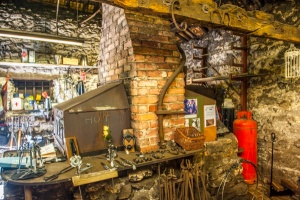 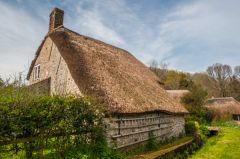 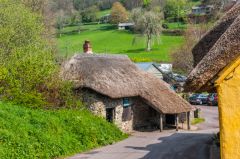 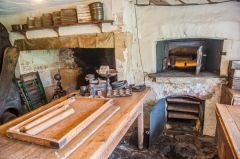 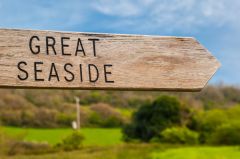 More self catering near Branscombe >>

More bed and breakfasts near Branscombe >> 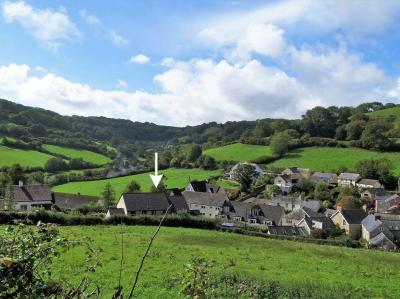 This modern characterful house, close to the beach in the popular Devon village of Branscombe can sleep six people in three bedrooms.
Sleeps 6 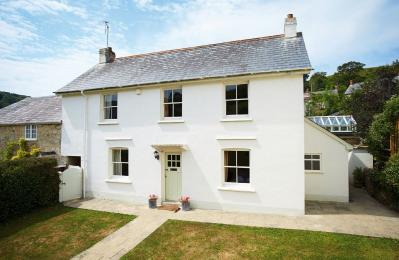 This excellent property is in the heart of Branscombe, approximately half a mile's level walk to the wide pebble beach and sea. Branscombe is a delightful village and the historic …
Sleeps 8